As Holden prepares to lower the curtain on its hero coupe, who better than Monaro-driving legend Colin Bond to shake down the last-of-the-line CV8-Z, and revisit a classic HG that's along for the ride?

ON A MISERABLE Melbourne winter's day, it seems even the weather is lamenting the end of the Monaro.

But, as persistent rain beads on the bonnet of our last-of-the-line, limited-run Monaro CV8-Z, a man whose formative racing years and hero status was created behind the wheel of Holden's original super coupe has mixed emotions.

Colin Bond (with Tony Roberts) was the first factory Holden driver to win the Hardie-Ferodo 500 (miles) at Bathurst in a Monaro GTS 350 in 1969, one year after privateers Bruce McPhee and Barry Mulholland gave the model its first Mount Panorama victory. But, like most racers, Bond is only slightly nostalgic about old cars. Hey, it was 35 years and a lot of brain cells ago. 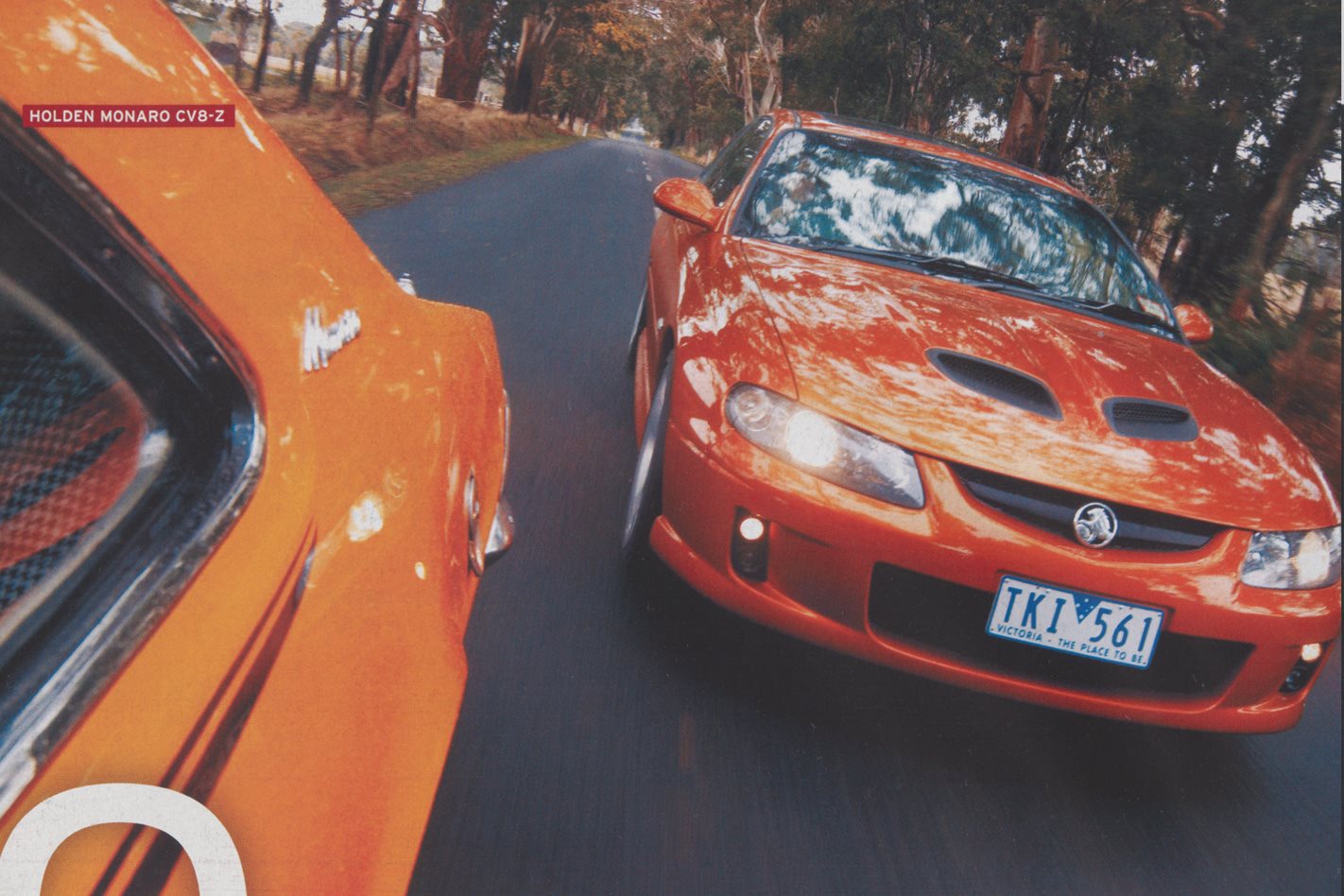 For Bond, those late-'60s Monaros were simply tools to advance his career and have fun in, and the clown prince of touring cars racked up a swag of victories, on the track, and in rallies, too. That said, the big coupe is a significant vehicle in Bond's life: when he got married, the bridal cars were two white Monaros, driven by Roberts and Peter Brock, no less. We can only assume they made the altar in record time.

As for the new-millennium Monaro, Bond says he's not upset by Holden's decision to pull the plug. He understands the commercial realities, and has seen this happen more than once in his driving lifetime. Unbelievably, Bond told us he hadn't driven a new Monaro, so we invited him to Melbourne to test a CV8-Z, to bookend this part of his motoring life.

For good measure, and to provide a flashback (no '60s drug puns intended), we brought along a pristine example of what got teenagers (and race drivers) hot and bothered in 1970 – a Holden 308-engined HG Monaro, albeit a Trimatic auto 'boxed one.

Given his choice of cars to drive first, Bond, who is fighting off a cold, has no hesitation in scrambling into the CV8-Z, switching on the heating and getting comfortable. The rain is beating down on the windscreen as we make for Mount Macedon, and I notice Bond does not even think about disabling traction control, like a lot of gung-ho journos might do, despite the conditions. He doesn't have anything to prove, least of all to me. 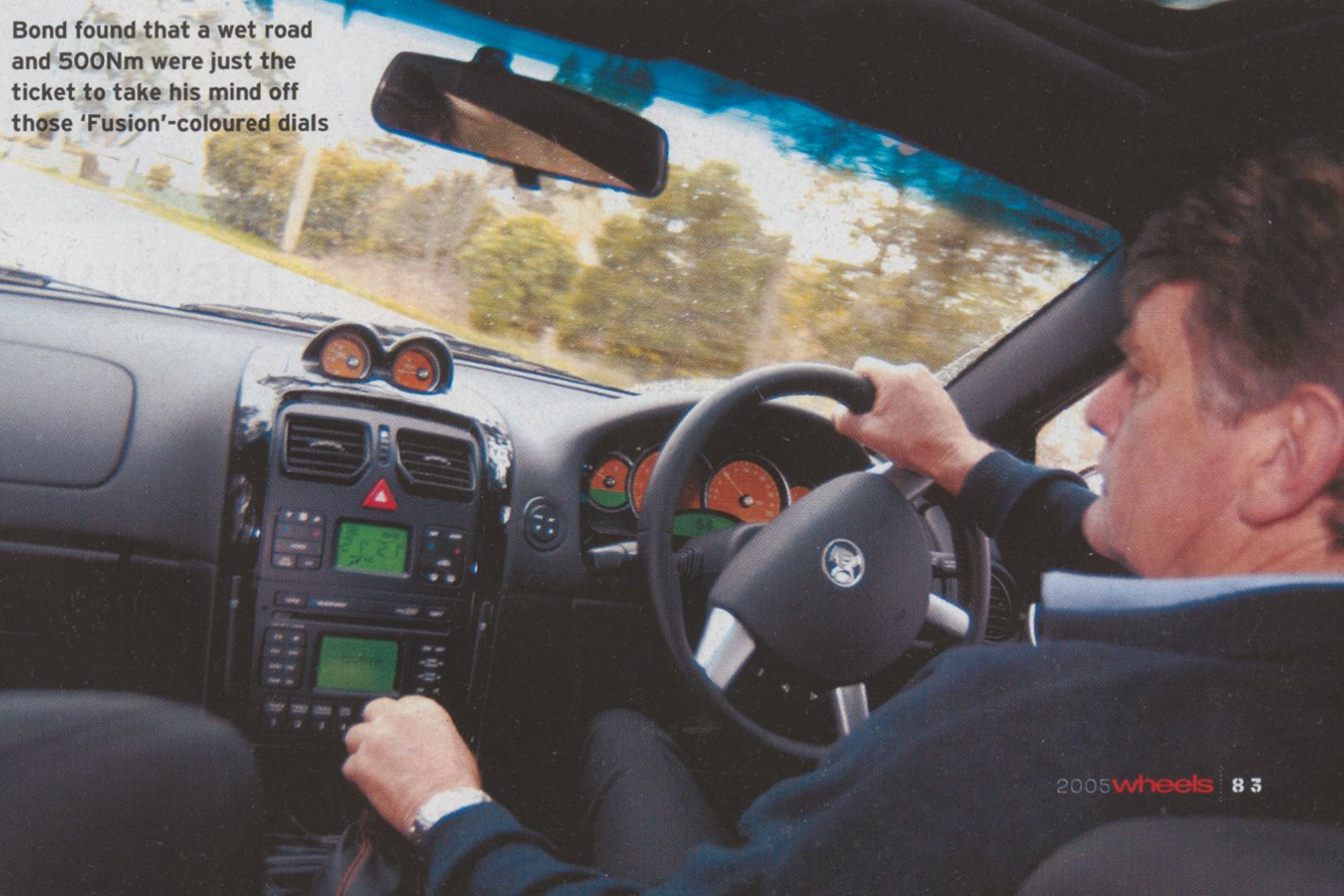 As we slosh along the Calder Freeway, Bond, who's fond of a chat, talks about the old days with little prompting. He was an established rally and hillclimb star when he got the call up by Holden racing mastermind and dealer team boss Harry Firth to race one of the newfangled Monaros at Bathurst. Unable to do the traditional Sandown warm-up race because he was rallying an Isuzu Bellet in New Guinea (we kid you not), Firth gave him a workshop-hack Monaro, known as The Iron Horse, to have a run in at a test day at Amaroo Park. From that day on, Bondy started liking Monaros.

"All the teams running at Bathurst were testing, and I turned up in this Monaro and was about a second a lap faster than everybody else," laughs Bond. "That was my first real drive of the car, and my first impressions were fairly favourable. I'd been to Bathurst twice before, but in a 1600cc Bellet, so it was good to get in a car that had plenty of zot.

"When I got to Bathurst, I thought, 'Where are all these corners coming from?' Because in the smaller cars they didn't exist! The brakes were always critical; the pads were quite hard and the brakes quite small, but the thing I noticed was you could leave it in third gear because it virtually pulled from no revs to 5000rpm. At places like Surfers Paradise, it was much faster if you used higher gears."

There's not much chance of Bond going much faster today, though, as the conditions deteriorate further, so our conversation switches to the Fusion-hued Monaro we're riding in and the new Monaro in general.

"When Holden launched the new Monaro, it revived the initial excitement we felt when the first Monaro was shown," he says. "Most modern cars look the same to me because manufacturers do so many market surveys on new models before they come out to make sure people will like them. But in the old days you could tell a Studebaker a mile off, because it was always different in design.

"The Monaro was the first of the modern-era cars that was different. It had a distinctive look, but was made out of a Commodore, just by lowering the roofline and changing a few bits and pieces; it was very clever engineering and I just think it's great."

That said, Bond won't be shedding a tear when the last Monaro rolls off the production line. Even his nostalgia has limits. "It's just a name," he shrugs. "Monaro is really just a two-door Commodore, and both the old and new cars were the performance versions of their days. Monaro might come back as a name; names go around, and who knows, they might bring it back in the future as something else."

The tourist road to Mount Macedon is deserted – let's face it, only car-mag blokes are dumb enough to be up here in this weather – so Bondy has a few spirited runs through a series of tricky corners (still with traction control on), looking as smooth as ever. When it's time for two-car pies, I tiptoe behind the bronzed Aussie in the venerable HG, aware that its grip levels are substantially lower.

I have to nail the rumbling old 308 to catch Bond, who effortlessly powers away from standstill, but the old girl turns in quite well and stops okay, although an acrid brake-dust smell fills my nostrils every time I do a U-turn.

Shrouded in grey mist at the top of Mount Macedon, the old HG looks very much like the ghost of Monaros past alongside its space-age progeny. It'd be easy to figuratively don the hippy beads and rose-coloured glasses and gaze at the HG with love, baby, but on a Woodstock-wet day, the swoopy coupe is not the best place to be.

For a start, the back window has fogged up, you can't see anything in the make-up-kit-sized door mirror, the wipers are useless, the engine's fuelling up because we're idling around on two of the Rochester carby's four barrels, and every time I brake, the backrest on the hounds tooth bucket seat lurches forward. But it does have power steering! Let's face it, though, classic cars are meant for fair-weather motoring.

Its owner, Russell Dunstan, is justifiably proud of his car, and keeps saying, "Wait 'til the four barrels kick in at 3500rpm." 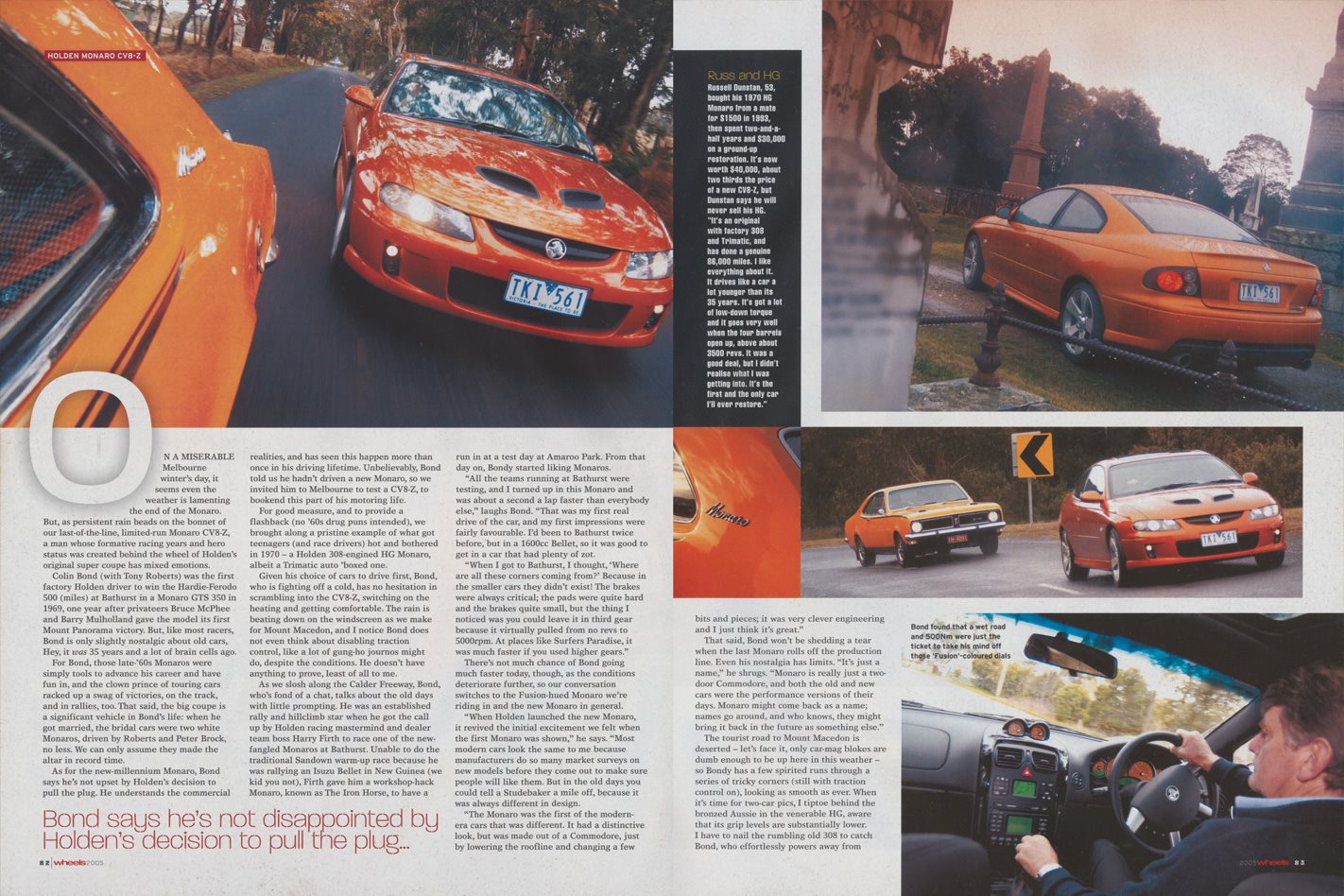 But honestly, Russ, not much happens at 3500, compared to dropping down a cog or two on the CVS-Z.

Dunstan's car is in fine nick and he reckons its engine is running better than ever, but even when it was new it made only 179kW (240hp) at 4800rpm. The CVS-Z, meanwhile, delivers 260kW, unchanged from the slight increase that came with the VZ update. But Bondy is right about the torque of the old 308 donk; it had 434Nm when new (the CV8-Z has 500Nm), and Dunstan's HG will pull uphill all day.

Driving the HG is not a total shock to Bond, as long-forgotten memories kick in. "The old Monaro didn't feel like a big car from the driver's seat," he says, lightly gripping the skinny steering wheel. "I found it easy to drive; it always turned in quite well, it didn't have any vices, like snap oversteer. 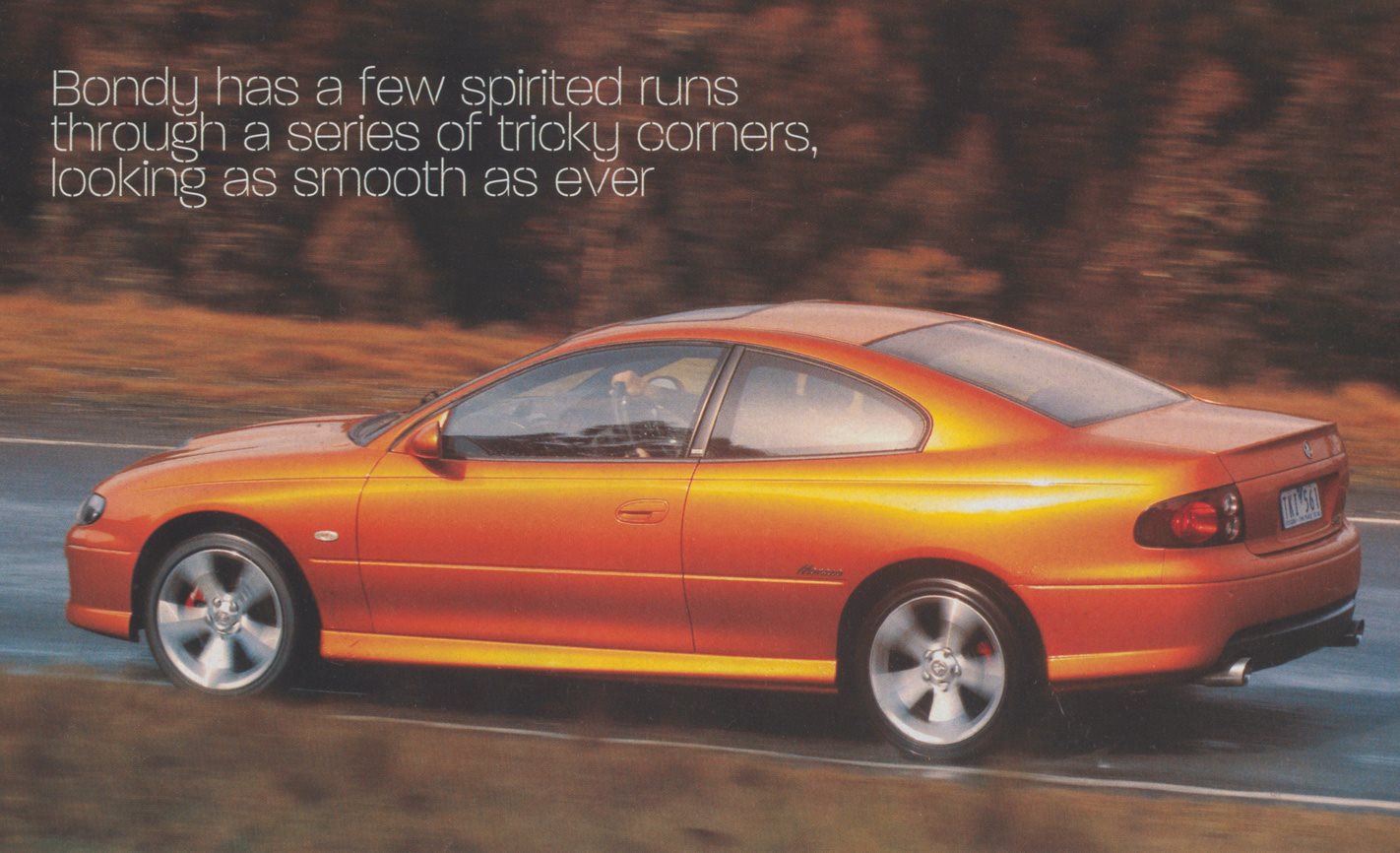 "It was very strong too. I can remember rallying a Monaro, running wide on a corner, crashing into a tree, knocking it over, then putting it in reverse, driving over the tree, and keeping going. When I got to the other end, the car didn't look any different!"

Nostalgia is nice, but at the end of our drive Bond draws a simple conclusion. "There's 35 years between these two cars and engineering has come a long way," he declares. "The new Monaros are more fuel efficient, safer in a crash, they've got ABS, traction control, cruise control, more power, better brakes ... better everything. The old Monaro was a very basic motorcar, [but] it launched my professional career."

Sheltering from the rain at a Macedon cafe, Bondy and I toast both Monaros with hot coffee and wonder if the CV8-Z will have to wait 30 years to be regarded a classic like the HG.

Or if it's already there. 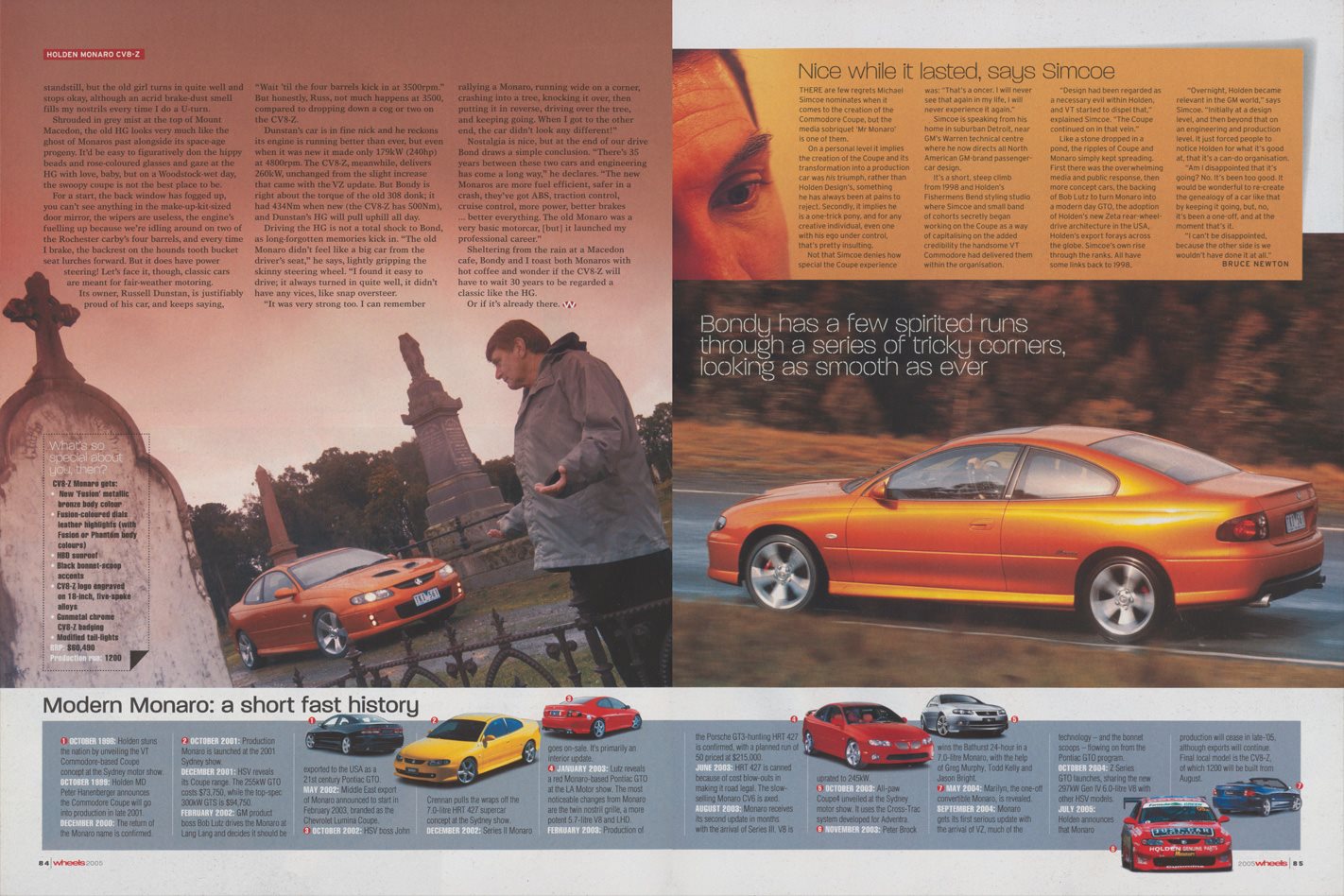