The first hurdle any new product must clear, be it a television, a toaster or a toothbrush, is to improve on its predecessor.

Cars, of course, are no different, but what if you’re trying to improve on perfection? The BMW M3 is a MOTOR hero, pretty much always has been.

Both E36 and E46 iterations won Performance Car of the Year – the latter almost did it twice – and while the E90-series didn’t quite achieve those dizzying heights, the way it comes alive when being hammered – that incredible atmo V8 singing at 8000rpm – makes it one of our favourite driving tools to this day.

So you could forgive the engineers responsible for the new F80/F82 (sedan/coupe) for tossing and turning in their beds at night, waking in a fitful sweat muttering “improve the M3? Did anyone ask Da Vinci to improve the Mona Lisa?” 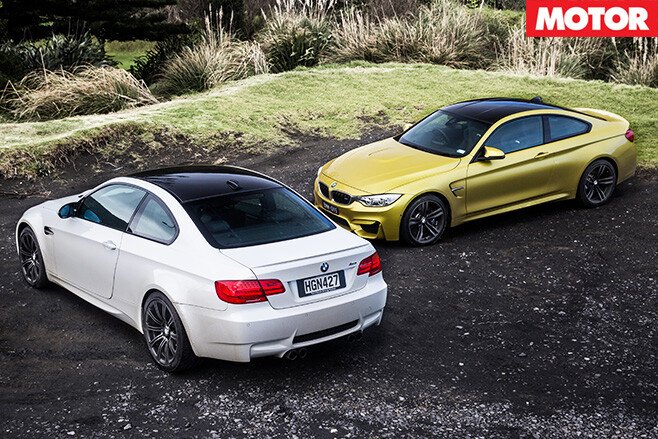 If the heavy burden of history wasn’t enough of a weight around their necks, ever-tightening emissions regulations mean for the first time, the efficiency of the new M3 is just as important as its outright performance.

To judge if the talented folk at M Division have successfully married these two contradictory goals, we have the serpentine roads of New Zealand’s North Island and arguably the new car’s toughest competitor.

A comparison test with its closest rivals awaits BMW’s new hi-po hero later in the year, but for now its greatest foe is the enemy within, its predecessor, the E92 M3. Credit to BMW for allowing this test to happen – not every company would. Much has changed with the new M3, but the most obvious difference is it’s no longer an M3, at least not in two-door form. As the 3-Series Coupe has now become the 4-Series, the M3 Coupe becomes the M4.

The idea is that the new name allows for greater styling differentiation between sporty coupe and sensible sedan, and the designers have seized the opportunity with both hands, the M4 exuding testosterone from every sharply-defined crease and gaping vent.

In comparison, the skinnier, more upright E92 Coupe looks weedy and undernourished, Bruce Banner to the M4’s Hulk. The carbon roof is a dead giveaway to those in the know, but parked next to its steroidal successor, the M3 is subtle almost to the point of anonymity. Nestle into the driver’s seat and the E92’s 2007 vintage hits you in the face like a Tinder date gone wrong. You sit higher and further forward than in the new car, and both material quality and interior design have advanced considerably in seven years.

There’s also nowhere to put anything – drinks, wallets, keys, etc – but one press of the starter button fires the 3999cc V8 into life and suddenly a lack of space ceases to matter.

It’s a sensational engine, its motorsport breeding obvious in its razor-sharp throttle response (once the ‘Sport’ button has been pushed) and the ease with which it revs to its 8400rpm cutout. Hearing an E92 M3 charge towards you in a wail of induction noise is one of motoring’s great experiences. 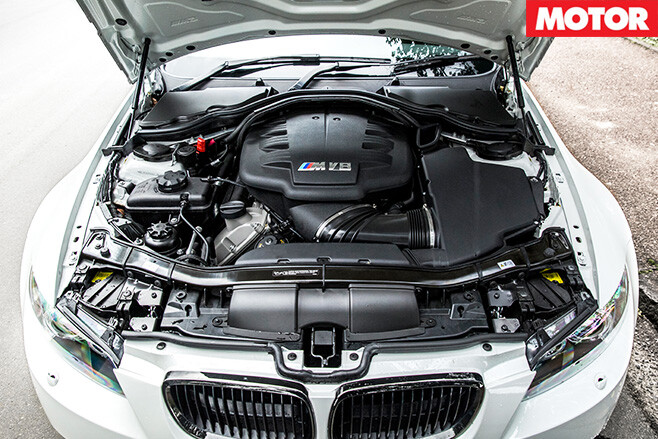 Heavily undersquare (the bore/stroke is 92mm/75.2mm), plenty of revs are needed for the bent-eight to give its best, and choosing the right gear for each corner is crucial if you want to make swift progress, a process made easier by the closely-stacked ratios of the seven-speed dual-clutch gearbox.

Sitting on 100km/h in seventh equates to 2500rpm, which is great for response but rather catastrophic for fuel consumption.

While still reasonably slick, the DCT feels a bit off the pace compared to the latest-gen dual-clutch ’boxes, so we’d stick (pardon the pun) with the six-speed manual. That way you can forget about which of the 11 gearbox settings you need, set everything else (engine, steering, dampers, DSC) to Sport and just remember to press the ‘M’ button on the steering wheel every time you take off. The M4 is a little more complex. It allows you to save two combinations of settings, but once discovered, simply save them to the M1 and M2 buttons on the steering wheel and you never need give it another thought.

For me it’s everything In Comfort for M1 (cruise mode) and throttle in Sport Plus, suspension in Sport and steering in Comfort for M2 (attack mode). Choosing a gearbox, though, has been made considerably more difficult.

The six-speed manual is now optional at no cost and has been significantly revised, losing 12kg and now automatically blipping the throttle on downshifts, but we’re yet to try it as our test car is fitted with the standard seven-speed DCT.

More importantly, it’s near-flawless in operation; taking off smoothly requires patience as there’s no ‘creep’ engineered into the system but once under way it shifts with the speed and precision of a Kobe Bryant jump shot. It’s ironic then, that the new S55B30 3.0-litre twin-turbo inline-six makes changing gear largely optional. Longer gearing (fifth now stretches to the 250km/h limiter and 100km/h in seventh is 1700rpm) and huge helpings of turbocharged torque catapult the M4 forward regardless of revs or ratio.

The initial power delivery is just as linear as the old V8, only massively more potent. By 1400rpm it’s surpassed the V8’s peak torque figure of 400Nm; at 1850rpm it generates peak twist of 550Nm, a figure it sustains until 5500rpm, at which point 317kW takes over until 7300rpm.

Is it as exciting as the old V8? Not quite. It lacks that incredible crescendo, the impression of never-ending rpm. Power continues to the 7600rpm cut-out, but it’s more effective to shift between 6000-6500rpm and mine the rich torque seam.

As a result, getting the best out of the M4 demands a new approach. Whereas in the E92 you’re constantly changing gear to stay in the magic 5000rpm-plus zone, third gear is often all that’s required in the F82.

With the engine set to Sport Plus, response is brilliant and turbo lag non-existent thanks to the ECU feeding fuel into the engine to keep the turbos spinning even when off-throttle. 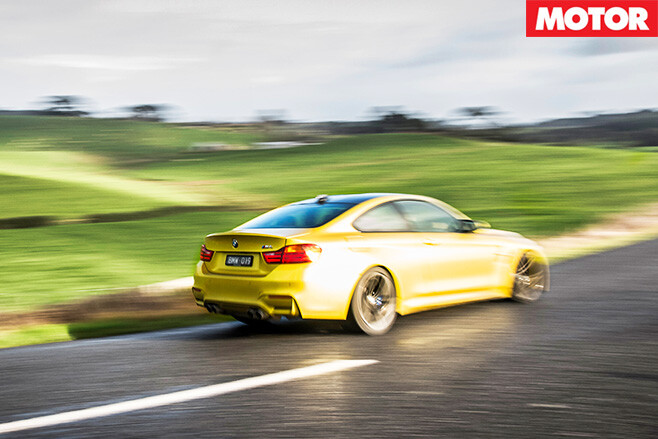 The massive increase in mid-range urge does create its own problems, though. On a dry racetrack the M4 is absolutely sublime. A 60kg diet, courtesy of a lighter engine (see breakout), carbon propshaft and lightweight body panels, has made it incredibly agile with enormous grip at both ends and the chassis balance is superb.

It’s incredibly stable yet any losses in grip are easily corrected when its limits are broached. Despite the switch to electro-mechanical power steering, there’s plenty of feel from the front end and the electronically-controlled locking diff makes heroic oversteer a breeze.

On a damp back-road, though, the game changes somewhat. The level of front grip is such that understeer is non-existent, but on a slippery surface the M4 will easily spin its rear wheels all the way into fourth gear.

We’ll reserve final judgement until we try the car on local roads in dry conditions, but the increase in grip does make the car’s limits harder to access on public roads and its responses snappier once you do find them. In contrast, the E92 feels smaller and more intimate, and its lower limits and relative lack of punch make it easier to occupy that grey area between grip and slip. Whereas the M4 must be treated with a good deal of respect, the older car can be thrown around with abandon – not the fastest way, but a lot of fun.

Back on the motorway, both cars prove equally impressive as grand tourers. Neither is particularly refined when it comes to tyre noise, at least not on NZ’s exceptionally coarse roads, but both ride beautifully in either ‘Comfort’ or ‘Sport’.

Drive the E92 M3 and F82 M4 back-to-back and you discover that, like many siblings, while they share DNA, they’re very different in personality. Both I and MOTOR contributor Adam Davis agree we enjoy driving the E92 more, though there is undoubtedly a degree of subconscious sentimentality in that conclusion.

Perhaps the most telling difference is that after almost 400km of varied driving, the older car is on fumes whereas the F82 is still a quarter-full, despite a smaller tank. The M4 is not only much faster than its predecessor, it uses far less fuel in the process. There was no way M Division was going to meet its performance and emissions targets with another naturally-aspirated engine. But the fact that it’s arguably the first full-blooded M-car in which the handling, not the engine, is the highlight is more down to the brilliance of the chassis than any real deficiency under the bonnet. While it needs care in the wet, it’s still miles more transparent and faithful than the aloof M5 and M6.

Though the E90/E92 twins still tug at the heart strings, the F80 and F82 are faster, more frugal, better equipped, more practical, but, most importantly, still scintillating to drive. We’ll learn more on our local roads, but for the moment, the first hurdle has been cleared.