SOMETIMES when life gives you lemons, you have to make a billion-dollar business idea out of them.

We never set out to get rich; all we wanted was to bring joy to the masses, and our plan was simple. I would become an Uber driver for a day and then surprise and delight customers by turning up not in a slightly tatty Prius with a pungent scent of desperation and Armor All, but in a Lamborghini Huracan. 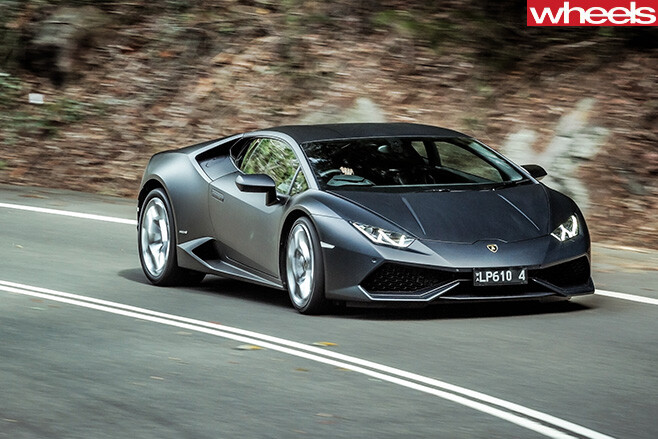 Uber – if you ask your friendly local taxi driver – is an evil global giant, bent on the ruination of the much-maligned taxi industry. Basically, it’s a phone-app ride-sharing service using private cars and drivers that undercuts the established players. Uber is particularly wonderful in places like Los Angeles, where you’re more likely to see a celebrity than a taxi.

Clearly, it has a big future because Google bought the company for $250 million.

Being relatively new, Uber was very keen to get involved in our idea. Then, so late in the day it was dark, we were told that some people had held some chats and decided that Uber didn’t want me and the Lambo on staff after all, unless I could find a four-seat Lambo, or invent one, within 24 hours. 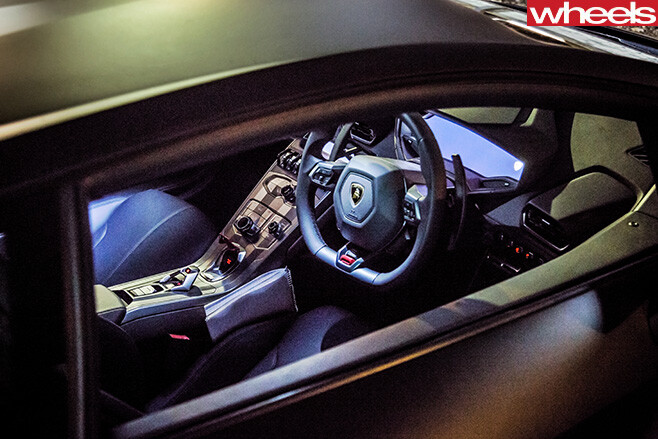 Well, as the saying doesn’t go, if you can’t join ’em, beat ’em, so we decided to launch Bonzer, our Aussie riposte to Uber, powered by an Italian/German car.

Using an app on my phone that you may have heard of called Facebook, I would enlist our dearly beloved Wheels community, offer rapid rides across Sydney, for free, and then gauge how much they might be willing to pay once they’d tried it.

In the medium term, vast riches await us, even enough to buy a fleet of new Huracans at $428,000, plus $20,000 for our stealth fighter matte-black paint, which would look great with our freshly minted Bonzer logo (sadly, we couldn’t find anywhere to stick the laminated poster I had made up – for $6 – because there’s barely enough glass to see out of as it is). 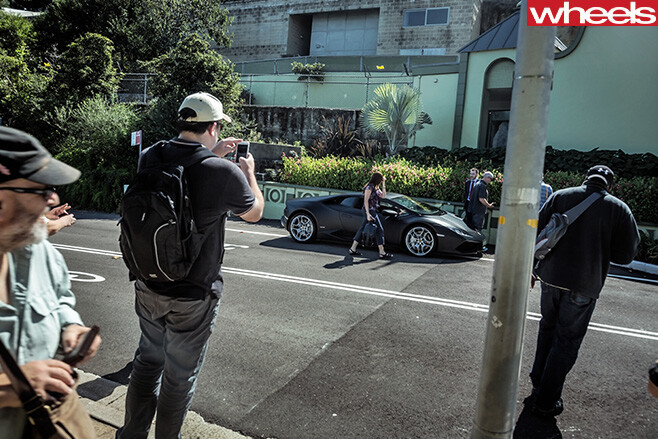 Our initial FB post asking for interested punters to get involved was greeted with slightly less excitement than we’d hoped – “Yeah, this sounds legit,” was one helpful comment – which was just the first example of some of the sad cynicism we would encounter. There really is a lot of hate on social media, isn’t there?

Fortunately, Gen Y-ers, like our first keen customer, 24-year-old Josh Smith, have grown up believing that The Internet Will Provide so find it easy to believe that someone will accede to their request for a lift from their Mosman office to Sydney’s Taronga Zoo. It turns out that Josh works for Audi and, while this might sound rude, I had to ask if he was a car dealer before agreeing to grant his wish. Luckily he works in finance, or something. As a wee lad of 24, I expected the Lamborghini to be utterly mind-blowing for Josh, but he tells me on the phone that he’s driven a few before. The unique presence and stature of our Huracan, however, broke down a lot of his cool, and he wept like a schoolgirl at a boy band concert when we arrived outside his work, where he was surrounded by awed colleagues.

Well, he virtually did, which is to say he swore repeatedly for several minutes; the only printable word he managed was “awesome”.

Most people you take for a ride in a Lamborghini Huracan behave the same way – they lean back and hold on, they scream or grunt involuntarily, and they laugh a lot – but Josh’s reaction was to lean forward, and start trying to push buttons. “You can put this on Corsa; that’s track, right? Is that faster? Let’s push this one… Can you drop it back to first? Can you flatten it? (Expletive) awesome…!” Josh’s best effort was yet to come. He pointed out that, as an Audi employee, he was basically insured to drive this Huracan – the only press car in the country, with just over 90km on the clock at this point – so did I reckon he could have a drive?

One of us then swore repeatedly for several minutes.

“What, doesn’t everyone who gets in a car like this, with you, ask that?” The road to Taronga Zoo turned out to be fun and winding, with a few rock walls off which to bounce the dinosaur roar of the naturally aspirated 5.2-litre V10 – surely the last of its kind we’ll see in the wild – particularly when Josh put us in Corsa, briefly. He did sum up the acceleration succinctly, though: “It’s mental, mental, mental, and then just totally insane!”

By the time we ditched Josh at the steps of the zoo, a huge crowd of tourists, fresh off the ferry, had gathered to shoot the raging bull. In the very olden days, when we had film in our cameras and our phones were attached to the wall, fewer photos might have been taken, but this was a paparazzi frenzy. 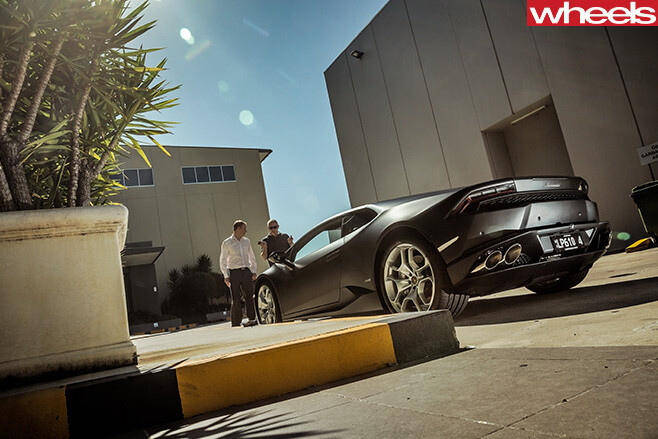 Our next customer was a long-term Wheels subscriber and thus, predictably, a fabulous bloke.

Brett Liffiton was just so obviously, palpably thrilled to be in a car like our Huracan, and was happy with a lift to his local Tesla dealer, even though it was only around the block, which gave us the chance to walk in and dumbfound the sales staff by saying, “I’m thinking of trading this on a Tesla, how many can I have?”

Brett is pretty much the personification of what I imagine all Wheels readers to be: Genuine, passionate – particularly about cars – and intelligent. We spoke almost as much about why we love magazines as we did about the car. 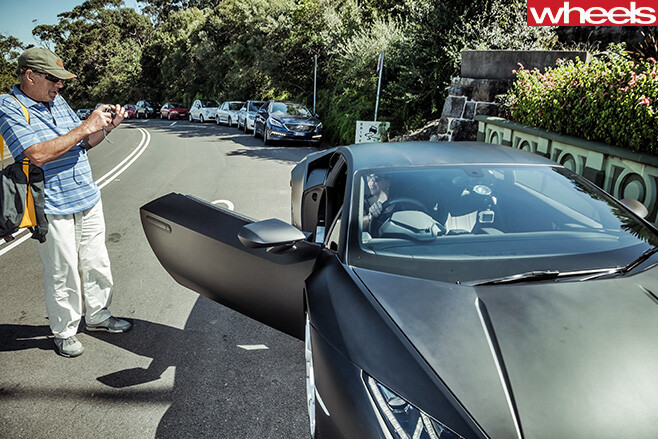 He did want to know how the sounds erupting forth on every downchange, a noise like hand grenades being thrown into an engine bay, could possibly be legal. It’s not an easy one to answer, but then the idea of 449kW and 550Nm in a road car that can get to 100km/h in 3.2 seconds – and to 200km/h in less than 10 – seems barely legal anyway.

We had to leave Brett, sadly, because a young man called Blake Jones, 24, who works in social media for Toyota – and therefore watches Wheels like a hawk – had a brilliant idea. He wanted a lift from one side of the Royal National Park to the other, and we wanted to take him, because this is a truly fantastic stretch of twisting, falling and rising road. Blake is a top bloke who will go a long, long way at Toyota because, even though he wasn’t at work, he kept pointing out how similar the Huracan was, in so many ways, to his Toyota 86. None of these had ever occurred to me so this was very helpful in reviewing a car with possibly more power than it needs, all-wheel-drive and a body made of carbonfibre and aluminium.

By the time we pulled over, half way through what I can only describe as the most visceral progress I’ve ever had along this magical road, Blake was in pain. 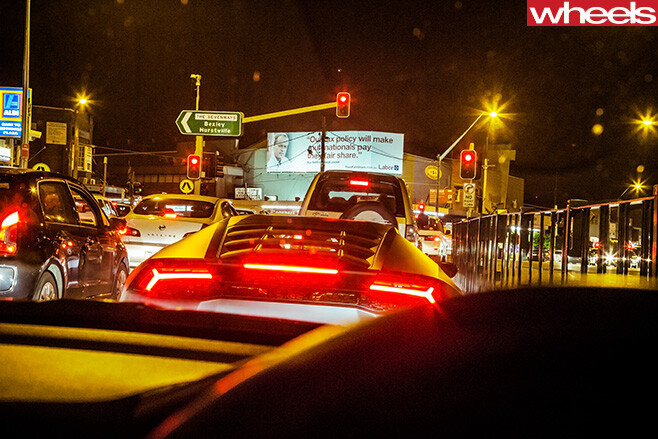 “Seriously, my cheeks are really hurting, I’m in agony, I’ve just been smiling so much, I’m like an eight-year-old with cars and this is just… just… amazing! Wow!” he shouted.

Blake then tried to explain Instagram to photographer Thomas Wielecki – a man whose phone is still attached to a wall at his house – before ‘periscoping’ himself live on the web, walking around the Lambo and talking, which was apparently watched by 153 people, all of whom just happened to be sitting around waiting for someone to walk around a Lamborghini Huracan while talking.

The world is a strange place, full of people like James Prumm, 26, who had contacted us to say he really wanted a Lambo ride to get drive-through at “the Dirty Bird”. Over the phone, James explained that it had always been his dream to get take-away KFC in a supercar. After meeting him in a car park on the Princes Highway, surrounded by all the giants of drive-through fast food, it turned out our car plays an even larger part in his dreams.

“Ever since I was 22, I’ve made it my goal to buy myself a Gallardo before I turned 30, because I just couldn’t think of a better life goal at the time,” James explained. “I haven’t made it yet, but this thing looks even better. Now I want one of these.” 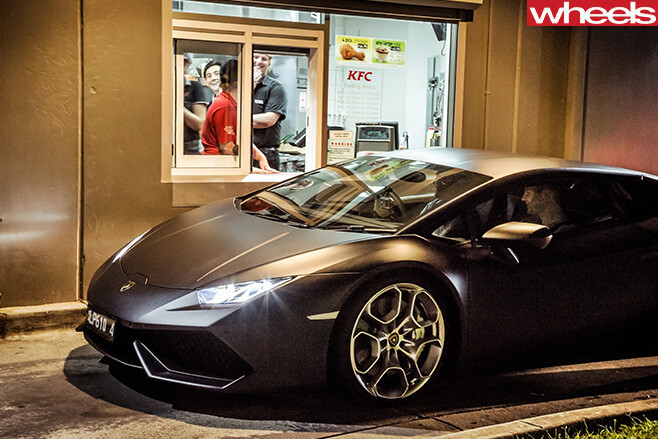 The Huracan caused much consternation inside the drive-through window. It was as if Colonel Sanders himself had turned up, with his wee, beady little eyes and his “oooh, yes, you will buy my chicken!” smile.

As quick and greasy as his ride was, James declared he would happily have paid $70 for his KFC experience, which was a good result. Josh later told us he’d have happily stumped up $100 for his lift to the zoo, while Blake rated his ride worthy of $450, at least, and Brett felt an hour in the Huracan, even just around the city, would be worth $200.

So, more than $800 for our day’s work – although that word seems entirely inappropriate, considering how much fun it was – minus roughly $100 for fuel (we averaged close to 30 litres per 100km), say $50K in depreciation and some middling amount for insurance and tyre wear. YOU might not have used Uber yourself, but you will because it is the future – like it or not.

Founded in 2009 in San Francisco, Uber now operates in more than 300 markets worldwide and is valued at $40 billion, meaning it’s grown faster than any other Silicon Valley success story, including Facebook and Google.

While its premium, taxi-like service UberBLACK is fine with local authorities, it is the “ride-sharing product”, uberX, that has caused consternation and debate over legality. That’s mainly because its drivers don’t have taxi licences.

Taxis without a driver

THE changes that ride-sharing has wrought already are nothing compared to what is just around the corner – driverless Ubers.

Google is already trialling the idea in America with its Google Cars, and bought Uber for $250 million with just such a future in mind.

The future is coming for Uber.