AT THE risk of stating the obvious, Mercedes-Benz has been at the pointy end of motorsport lately. Hard to imagine, then, how different its brand image was 26 years ago.

First published in the April 2016 issue of Wheels magazine, Australia’s most experienced and most trusted car magazine since 1953.

With the exception of the Cosworth-tweaked 190E 2.3 and 2.5-16 models, Merc’s matronly range through the 1980s was consistent with a company that had officially denounced motor racing for more than 30 years, following the 1955 Le Mans disaster. Mercedes tentatively commenced supplying engines to the Sauber sports car team in 1985. After Le Mans and WSC victories in 1989, Mercedes put its own name to the team in 1990. It began to embrace independent tuner AMG the same year, no doubt with an eye on rival BMW’s booming M-car range.

The embodiment of all that pent-up performance angst arrived at the 1990 Paris motor show in the shape of the 500E. The body was comfortably familiar (the W124 series was already six years old), but wider, lower and more muscular than the average Stuttgart taxi. The 240kW 5.0-litre quad-cam V8 came from the R129 roadster (1989), as was much of the suspension, transmission and brakes. But the 500E was no mere parts-bin special, with the body shell and most parts modified and upgraded to suit the four-seat cruise missile.

Most interesting of all was the process by which the 500E was produced. With launch pricing slated at DM135,000, or more than double the price of a 300E, Benz had forecast volumes of only 3000 per year. For the performance-development and low-volume production facilities it needed, Benz turned not to new homeboy AMG, but to cross-town rival Porsche. For the latter, the 500E contract was a financial lifeline because its 959 production had ended and the yuppie-stained Porsche 911 was struggling to sell. 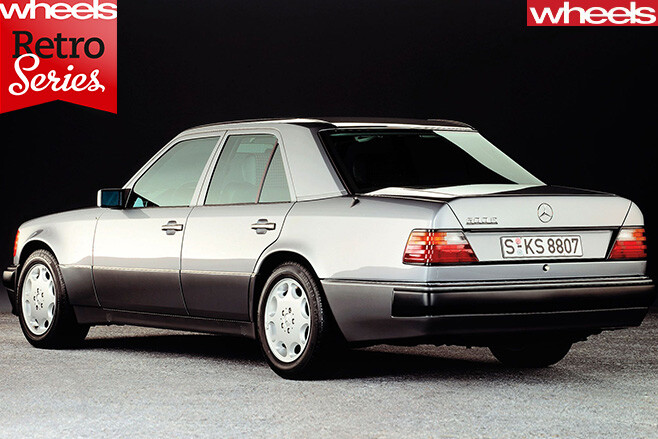 Standard W124 shells went to Porsche for structural and aesthetic mods, then returned to Benz for painting. The cars went back to Porsche for final assembly.

This pushed production of each 500E to 18 days, versus three days for a standard W124. It was worth the wait; the 500E (facelifted and renamed E500 in 1993) was recognised as an instant classic, with continent-clawing performance and comfort, and limited availability. Just 10,479 examples, all in LHD, were built from 1990-95. Benz had a formidable basis in the landmark W124, with its separate spring/strut front-end and multi-link rear. The 500E sat 22mm lower on 37/38mm wider tracks, with uprated springs and dampers and 16-inch alloys. Ride suppleness was legendary; the only dud note was the slow, recirculating-ball steering. SL-sourced brakes improved in ’93 with bigger V12-spec items.

The 500E qualifies among the great hand-built Benzes, with much of the chassis and subframe reinforcement being hand-welded at Porsche, the 500E earning a Type 2758 designation at Zuffenhausen. Front and rear guards are subtly flared while a new front air dam reduced lift by 50 percent. Shaped rear bench, forced by a fatter centre tunnel, makes the cabin strictly a four-seater. Interior boasts plenty of leather and woodgrain trim but was as practical and hard-wearing as humbler Es. The 500E wasn’t just a charity root for struggling Porsche; rumours swirled at the time of a friendly takeover by Mercedes-Benz. 500E or E500? Both, actually. All of Mercedes’ designations swapped ends in 1993, coinciding with the W124 series’ final facelift

Mercedes’ tuning arm AMG had only a peripheral involvement in the project, converting a batch of 45 late-build E500s to 6.0-litre E60 AMG spec