First published in the May 1968 issue of Wheels magazine, Australia’s most experienced and most trusted car magazine since 1953.

The voice at the other end of the shaky Roman telephone announced that it belonged to Georgia Glarey, of Divas Mofe, Alfa's export division.

"Would you be free to go to Salerno next morning for the press release of the new 1750 models?"

"Yes, I would very much like to go to Salerno, but whereabouts is it, please?"

"In the south, down near Naples."

"The same Naples that you see and then die?"

"That depends on where you eat."

"Okay, then. See you in the morning."

That left me with just a day in Rome - a Sunday, hardly enough time to hire a guide in his sanely driven Fiat 2300 for a once-over-lightly.

Certainly not enough time to make contact with the people to whom I had letters of introduction, including Alitalia, which badly wanted to show me its training facility with the Macchi jets it uses in common with our RAAF..

Right on time Georgia appeared at the hotel and after a minor panic to get color film; we tracked through Rome's Monday congestion, following the signboards that said Sud. My initial apprehension about passengering was helped somewhat when I discovered that Georgio was just about as terrified of Rome's traffic as I was. "Not like this in the north" he explained as we slipped through yet another buzz of Fiat 500s. Scooters are rare now; 50Ds have taken their place.

Out on the autostrada Georgia poked the Alfa Super into ·fifth and we were away, cruising at 160 to 175 kph (100 mph and upwards) without the slightest risk or problem in the incredibly well-disciplined traffic.

But the further south, the greater the horn blowing, fist waving and the dirtier the looks. Even the Fiat 500 drivers seemed to be able to find slower traffic to abuse.

Salerno turned out to be a comparatively quiet town with snow-covered hills in the background. It was the scene of a monumental battle during World War II but shows no sign of it now. During the summer months it is a seething beachside resort, but packs up for a the winter. Even the Hotel Baia Alfa had taken over for a 10-day stint for a succession of press and trade people had to be specially opened-up for the occasion.

And just to get people in the mood and to ensure that the 1750 bit of the new car’s badge did not escape them, Alfa had cranked up one of its museum-piece 1850 roadsters (circa 1934) and parked it at the door. But for those bent on something more modern, there was a Type 33 road-going coupe in the car park. The keys, it was pointed out, had been returned to Milan along with the Autodelta driver who had brought it down. Just as well really, since I could not imagine Alfa turning such a beast loose with a pack of motoring journalists. And I certainly quaked at the thought of having it demonstrated to me by a zealous operator zipped up tight in those traditional blue overalls. 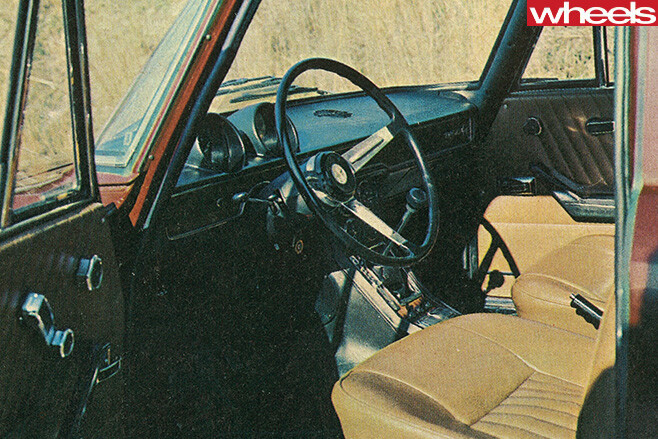 About the only difference between this Italian-style press party and its Australian counterpart was that the non-temperance rumble of martini-oiled voice was a veritable united nations. A Czech was trying hard to explain something to a Belgian, a long-haired and scruffy young Englishmen was expressing opinions to an Italian engineer who did seem to be understanding a word of what was being said; two overweight Frenchmen sipped their drinks in the back seat of the display 1750 sedan and appeared well satisfied with their elbow-bending room; another Englishmen was already asking a lot of his liver; a German was nosing around in the boot trying to count the items of leather baggage that had been so neatly packing in; and an Italian photographer was bouncing his East German camera off the unyielding marble floor.

At 0800 next day Alfa PR displayed its stuff. In the car park of another hotel half a mile away, zippered-up mechanics stood by three long lines of new Alfas – sedans, GTs and Spiders – all carefully warmed-up, cleaned and ready to go. Georgio and I pounced on a wine-coloured sedan about 15 seconds before the rest of the mob stampeded.

The map we had been supplied with the night before announced that it was the “percorso di prova” and “Journalists are kindly invited to follow the itinerary here shown and indicated by particular road signals. Traffic policeman will patrol the itinerary.” The last part looked very like a threat of some kind. Perhaps they were like Australian police, after all.

Despite its clean, but rather ordinary appearance, the Bertone-designed 1750 still has a family resemblance to the Super it supplements, despite 2.3 in. more wheelbase and 10 ins. more overall length. It uses 14 in. wheels instead of 15 in. and the tyres have wider sections – partly for style and partly for better dry-road handling.

The cabin of the 1750 is certainly bigger. With the front seats fully back there is ample back seat legroom and more width, too. None of the instruments has been lost in the rehash of the cabin, but they are displayed very differently. For instance, the speedo and tacho have the dash to themselves, the minor controls and dials being arranged down the centre console from which protrudes the gearshift lever. Maybe it takes more miles than I did in the 1750 to· get used to the console dials, but I had to take my eyes off the road too long to read them. I liked the idea of the omni-directional fresh air vents on the dash as part of the through-flow ventilation system. Enough air passed through the cabin to keep the place fresh without having to open a window.

This also highlighted the low wind and road noise levels of which Alfa's engineers are rather proud. One of them told me that they had gone to a huge amount of trouble to insulate the engine and gearbox from the cabin - successfully, apparently, since there were no sounds and vibrations excited by either the drive train or the engine.

All this while trying to get the feel of the device along the autostrada section of the 130-mile route we had been invited to follow. It also seemed as good a time as any to ease the speed up to three figures to see if the talked-of 118 mph was a reality. Fifth gear gives 20.6 mph per 1000 per and we were getting close on 6000 rpm, which indicates a fair claim.

After 9000 miles in Australia in my own Super, I was very impressed by the 1150's flexibility. I slowed down to '40-45 mph in fifth and the Alfa pulled away willingly and quite fast. In fact, I found myself using the gearbox too much at 'first. 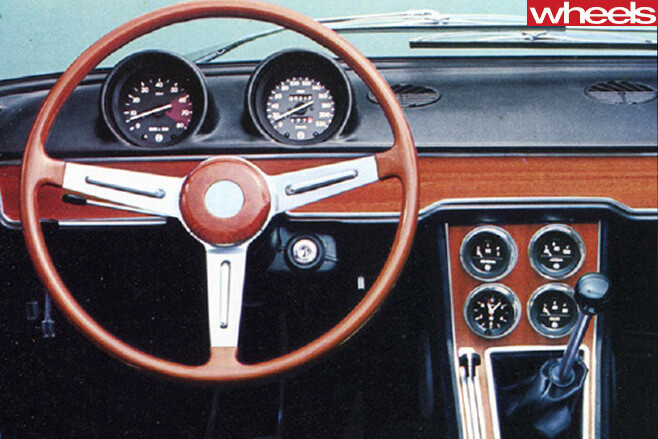 The bigger bore, bigger stroke 1779 cc twin-cam four gets 132 gross horsepower at 5500 rpm with 139 ft lb of torque at 2900 rom. With a kerb weight of 2447 lb it should be flexible too. Basically the engine is the same as the Super's in layout and general concept.

It uses two double-choke Weber carburettors, has 9 to 1 compression and a sealed radiator system. The five speed, all-syncromesh gearbox is the same. With so much engine torque, Alfa must be rapidly heading for the day of the automatic transmission.

Meanwhile, back on the autostrada we howled past an old Alfa police car which obligingly moved well over to let us through. At the tollgates, the man waved us on. All pre-paid and arranged by the PR people.

Our percorso di prova said leave the autostrada at Battipaglia and head due south to Prignano Cilento. I hesitatingly got on to the cloverleaf exit wondering which way to go. No problem; a large traffic cop and an Alfa man in overalls were waving madly,and holding up all other traffic to ensure us our trouble-free passage. In fact, they both looked utterly disgusted when I motored around their corner at a modest 20 mph in third. What was expected of me and every other 1750 driver was at least 7000 rpm in second, clouds of tyre smoke and half a lock of correction. So I obliged like some kind of privileged boon on every subsequent corner - every one of which was controlled by several police at the expense of all other traffic.

These twisting mountain roads had been specially chosen, the Alfa people had informed me, to demonstrate the 1750's handling. If they had been chosen specially to make me feel at home, they could have hardly done better - twisting, narrow, bitumen that was bumpy and slippery. But this stretch did show the 1750's reduced understeer, utter faithfulness and complete ease of handling. Big squirts of power in second and even third gear got the tail out over so neatly without even a touch of the old clammy hand.

A rear stabiliser is used and the roll centre has been raised slightly, but the smaller wheels have lowered the height by half an inch compared with the Super. The all-coil suspension is practically the same as the Super's with the rear roll height fixed by the attachment point of the upper radius arms.

On the choppy uneven surfaces, the 1750 felt extremely taut and unbreakable with never a creak, a groan or a rattle. From the outside the 1750 corners flat and steady.

We stopped while I took some more pictures on the narrow section in the mountains; then last night's scruffy Englishman slammed his way at 80 mph or so between us, an old Fiat 1100 flogging up the hill and an ancient woman trying to get some action out of her layabout donkey. I can hardly blame the donkey for wanting to give that road a miss; he obviously knew more than the old girl.

Halfway back to Salerno I was able to do a deal with another tester to take over his 1750 GT in exchange for my sedan. It differs slightly in outside appearance from the GT Veloce in that it has four headlights instead of two big ones and looks neater with 14 in. wheels. It uses the sedan’s engine and the back stabiliser bar but is otherwise virtually the same as before, apart from new instruments, steering wheel and rack-up headrest in the passenger’s seat.

Being a couple of hundred pounds lighter than the 1750 sedan, higher-geared and with less frontal area, the GT wound out very smartly through the gears and with the help of a slight downhill run pulled 6000 rpm in fifth. Like the 1750, the GT was rock-steady at full chat and pointed very accurately through long corners and around Fiat 500s.

Back in Salerno I just had time to thank the PR people for their help and to ask how many new cars had been destroyed during road testing sessions. Looks of amazement: “Why, the worst thing that has happened was that one of the Frenchmen got a flat tyre, but our follow-up service can crew changed it for him.”