Is it a Ferrari? Is it a Dino? Peter Robinson delves into the history of the much loved classic which was an orphan of sorts from day one.

My first Ferrari wasn’t really a Ferrari. Not strictly speaking. The Dino badge on the 246 GT’s exquisite nose confirmed that the little mid-engine V6 was a Dino, Enzo’s secondary brand, created with the aim of building a ‘relatively’ more affordable sports car to compete with the Porsche 911.

Of course, that didn’t stop the world from referring to the car as the Dino Ferrari – some owners even added Ferrari badges – though the sub-marque lived on until May 1976 when the replacement Bertone-designed 308 GT4 swapped the Dino badge for the Prancing Horse.

Australia’s first Dino was imported in left-hand-drive form by W.H. Lowe, then Ferrari’s local representative (and the oldest Ferrari dealer in the world), to build interest in the new 246 GT, a model they believed would double Ferrari sales.

Initially, Maranello planned to build the Dino only in LHD. The Australian agent was told that Ferrari needed 40 to 50 orders to justify the cost of engineering right-hand-drive Dinos. Lowes predicted they could sell just 15 cars, but worked out how a conversion could be done and set about convincing the UK agent that they should order enough cars to justify the build. It worked. In 1973 Lowes sold close to 50 cars, most of which were 246 Dinos.

By the time Mel Nichols drove Australia’s first Dino for Wheels in 1973, the steering wheel had been moved to the right-hand side, this being the engineering car used by Lowes to prove to Maranello that it was not only possible but comparatively simple. 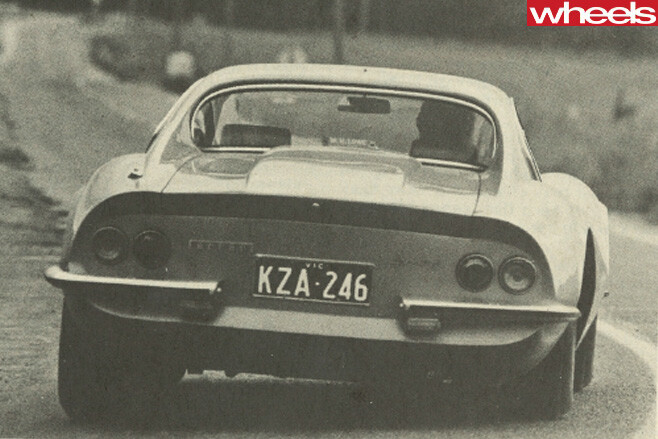 The tiny Dino – just 4216mm long (shorter than a Golf), 1143mm high, 1701mm wide and weighing 1079kg – was powered by essentially the same 2.4-litre V6 that Chris Amon and Graeme Lawrence used to win the 1969 and 1970 Tasman Cups. It was no supercar even by the standards of the early 1970s. Wheels ran a full set of performance numbers – standing 400m in 15.1sec – in a full road test, written in Mel Nichols’ wonderfully evocative style. Still, a mere 145kW was power enough to induce oversteer, the 205/70VR14 Michelin XVRs offering modest grip.

Wrote Nichols: “The important part, the tremendous part, is that the car’s performance is finely balanced to every other part of it, giving an overall ‘totality’ feel that is probably the most desirable quality in a motor vehicle.”

Mel didn’t spend more than a sentence on the Dino’s beauty (the driving experience was too important) yet today the 246 is seen as a Ferrari/Pininfarina masterpiece, one reason why you’ll pay upwards of $400K for a mint example.

Styled by 27-year old Leonardo Fioravanti – who’d previously designed the 250LM (Ferrari’s last Le Mans winner) and was about to start on the famed 365 GTB/4 Daytona – the sublime Dino, all voluptuous curves, delicate details and a huge windscreen for brilliant visibility, was also aerodynamically efficient and thus stable up to the 248km/h V-max.

Nichols criticised the difficult-to-see instruments, the weak ventilation and lack of adjustment for the little bucket seats, but found so much to love in the driving that these flaws became irrelevant.