An emotional Jim Richards once told the Bathurst crowd: “You're a pack of arseholes!” Here’s Wheels’ account of what led up to that infamous 1992 outburst.

An emotional Jim Richards once told the Bathurst crowd: “You're a pack of arseholes!” Here’s Wheels’ account of what led up to that infamous 1992 outburst.

It was, perhaps, Bathurst’s darkest day. Mark Fogarty was there to record the drama and tragedy you didn’t see.

IT’S three hours since his Nissan GT-R skated off the track amid murk and mud and Jim Richards has been on an emotional rollercoaster. He’s ridden his feelings through disbelief, despair, guilt, surprise, elation, disgust and relief.

Now in the Winfield racing tent, surrounded by crew and friends, the biggest emotional wave is about to engulf Richards. He is proposing a toast to his friend Denny Hulme, who suffered a fatal heart attack early in the race.

“We all lost a good mate today.” Richards says, his voice so strained he is almost choking on the words. “Ladies and gentlemen, would you charge your glasses… to Denny.”

The memory is too much and Richards can no longer contain his grief. Overcome by sadness and mourning, he cries. For several minutes he wipes tears from his eyes as he is comforted by Russell Skaife, friend and father of his team-mate Mark. 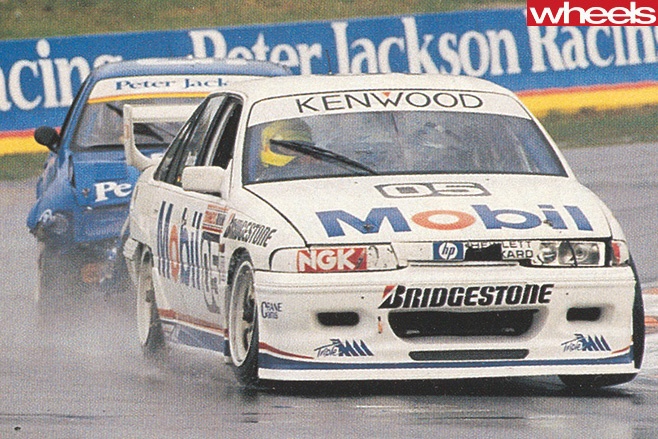 Richards took Hulme’s death very hard. They had been very close, Kiwi comrades whose relationship was described as “a mutual admiration society” by a long-time friend of both.

A few hours earlier, just after 4.30pm, Richards didn’t have time to think about Hulme. His mind was focused on keeping Godzilla from falling off the Mountain. As he headed up the hill on lap 145 of the Tooheys 1000, Bathurst was blinded by torrential rain.

Richards managed to keep the car going up and over the hill, crab-crawling at little more than idle speed. As he struggled to stay on the track, others were spinning and crashing. 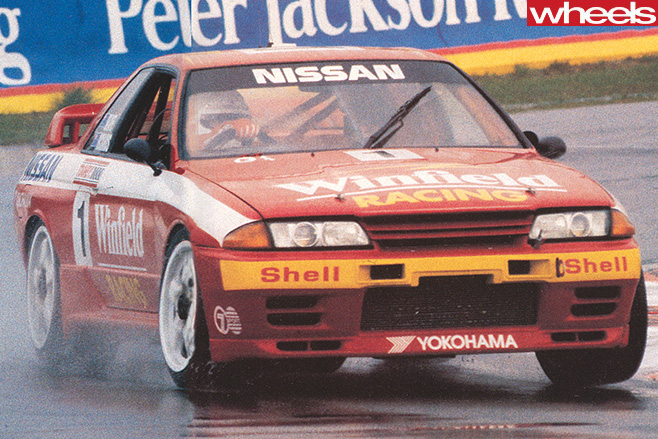 Coming out of Forest Elbow onto Conrod, Richards became a passenger as the battered GT-R slid out of control into a concrete wall, then slipped out and slammed into the aftermath of a multi-car accident just moments before.

When Richards left his wreck, he was unaware that the race had been declared at 144 laps, when he was far in front. The Winfield wonder car had been there since the second lap, when Skaife passed Dick Johnson at the end of Conrod Straight.

By the time Richards got back to the pits, where he was stunned to learn that he and Skaife had retained their Bathurst crown after all, the crowd was already baying for blood. They regarded Johnson, whose Shell Ford Sierra was still running after being shod with wet rubber during the Mountain mayhem, as the rightful winner.

It all turned ugly during the victory presentation. As Richards and Skaife stepped onto the podium above pit straight, the mob chanted "Bullshit, bullshit" and other choice epithets. 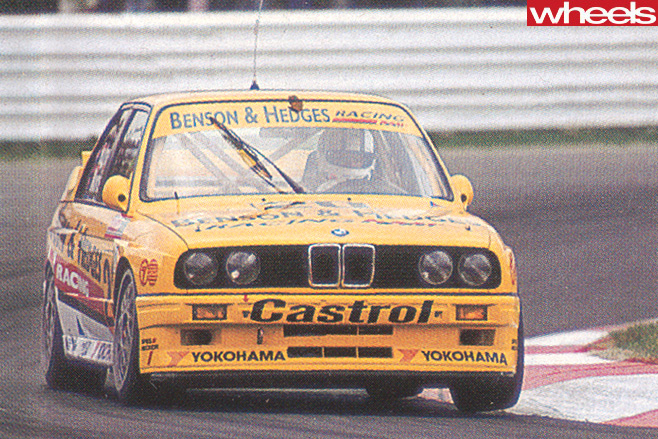 Down on the ground, Nissan managing director Leon Daphne, bravely brandishing a corporate umbrella in the midst of hostile natives, was taunted into retaliation. In response to repeated singing of "Nissan cops it up the arse, doo-dah, doo-dah," Daphne turned on the crowd, battering boofs with his brolly.

Even more remarkable was Richards' response. "This is disgraceful," he barked. "This reception will stay with me for a long time. I thought Australian motor sport fans were made of more than this. You're a pack of arseholes."

Although uncharacteristic, Richards' outburst was justified. On this day of triumph and tragedy, he spoke the words millions were mouthing at home.

It was the day of the Black Reign, when dark clouds – both real and metaphoric – cast their pall over the final appearance of the Nissan GT-R. 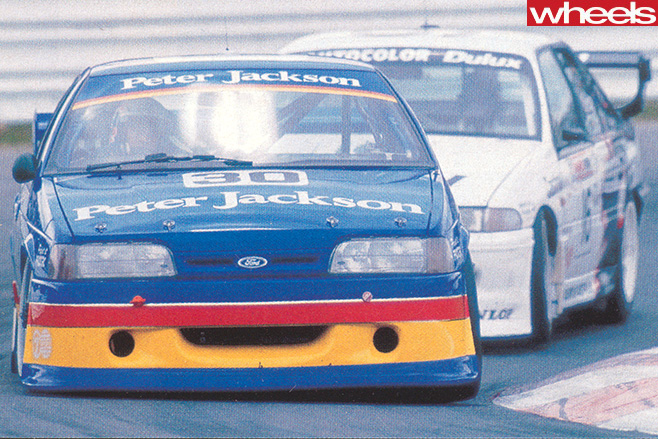 Of course, it was always going to be a contentious and eventful 30th running of The Big Race. Small minds and big issues guaranteed controversy.

The car that ate Bathurst in 1991 returned hungrier, if not leaner. Despite Winfield Racing team boss Fred Gibson's earlier vow not to bring the handicapped Nissans to Bathurst, where he claimed they would be unsafe and uncompetitive, the team arrived in full force.

Among the punters, resentment of the four-wheel-drive, twin-turbo supercar was made more intense by the restrained resumption of the V8 wars. For the first time since 1984, there was a Falcon V8 in the field. Glenn Seton's Peter Jackson EB Falcon joined the VP Commodores of Allan Grice, Tomas Mezera and Peter Brock to preview Bathurst '93, when V8s will be the only Tooheys Top Guns.

It was into this highly charged atmosphere that I returned to Bathurst after five years and half a world away. Would Mount Panorama still be a motorsport peak after the glam jam of Formula One? 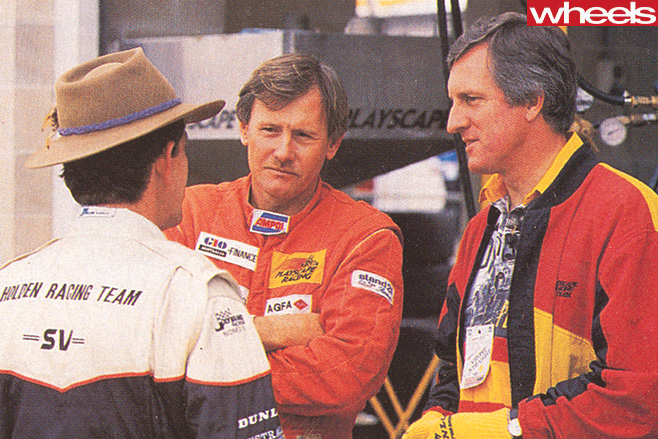 Well, it was different. Especially Saturday evening, when I took a trip up the Mountain with Holden hero Grice, freshly elected state member for Broadwater in Queensland. For the past eight years, Gricey – ah, the Right Honourable Gricey – has been treating campers on the hill to sangers, tinnies and all the autographs you can find space for.

The mountain men and women are a feared breed among the gentlefolk down in the paddock. But we survived. Grice and teammates Tomas Mezera, Win Percy and Brad Jones were received enthusiastically and treated with respect.

Hundreds of fans turned up and, while Grice and the gang signed anything from books to bosoms, helpers dispensed barbecued sausages in rolls, cans of beer and highly prized HRT flags.

According to Gricey, he's never had any trouble with the camping corps. "I've seen little problems start and they police themselves. You know, they stop it – they say 'Hey, you, out! ' – because the last thing in the world they want is for you to pack up and go away. 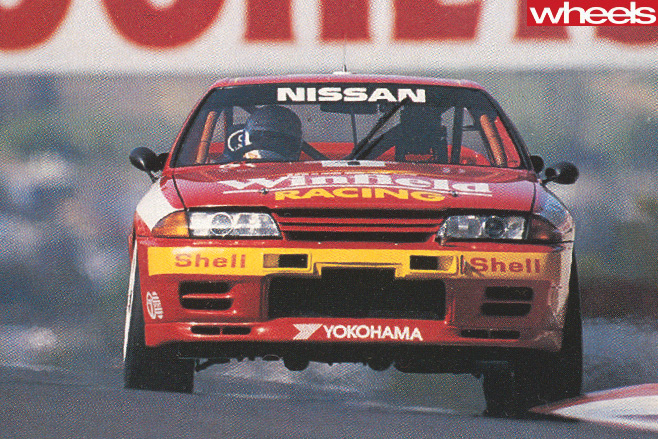 "It's regarded as an 'Animal Factory' up here. People don't come up because they're frightened they'll be beaten up and peed on. Those are the stories you get and that's why the drivers don't go up there. But they're not animals, are they? They're just a rough bunch having a good time."

One celebrity who didn't dare venture onto the Mountain was Doug Mulray, former king of Sydney breakfast radio, host of the Naughtiest Home Videos television show which had its plug pulled, Jaguar fan and full-on petrol-head.

Mulray, a member of Seven's commentary team, was mobbed whenever he left the TV compound. Shouts of "Dougie, Dougie!" rivalled those for "Brocky!".

The rude Reverend Doctor Doug is a Brock fan and he had no intention of lambasting motor racing's folk hero. "There's nothing funny about Brocky, nothing funny about any of the heroes. Whether they're on the right side – the Holden side – or the Ford side, I'm fascinated by what the Brocks and Johnsons do and how well they do it. I don't want to demean them. I'm here because I love it." 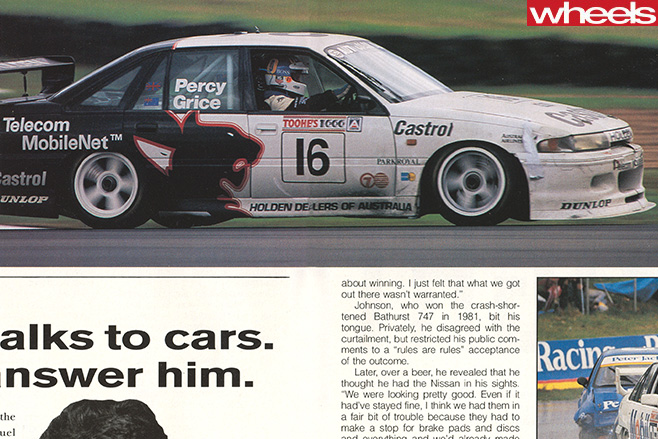 Bathurst brings them from everywhere. Federal Opposition Leader Dr John Hewson took a break from sparring with Ford and Toyota over his vision of the motor industry to join the pit crew of Gold Coast businessman Kevin Waldeck's Ampol Sierra team. Waldock likes Hewson's policies and early this year contacted the would-be PM, offering him race driving tips and honorary membership of his team.

Hewson, Ferrari owner and long-time motorsport follower, accepted Waldeck's invitation to crew for the team in the 1000. His presence was a coup for Waldock, guaranteeing newly signed sponsor Ampol plenty of media exposure. Of course, it also gave Hewson the opportunity to push his political barrow in front of a largely captive audience of around four million.

Not that Dr Hewson, who was shadowed by his press secretary, was looking for an opportunity to reverse negative publicity that he has it in for the local car industry. "I didn't do it from that point of view," he said. "I committed to this long before the whole issue broke, really. I've always had an interest in motorsport and I think motorsport really is a very good sport from the point of view of most Australians.

"I think a lot of people would watch the race and understand there's no politics in it. You just do it because you enjoy it. I could get better coverage at a lot of other sports which I don't support.” 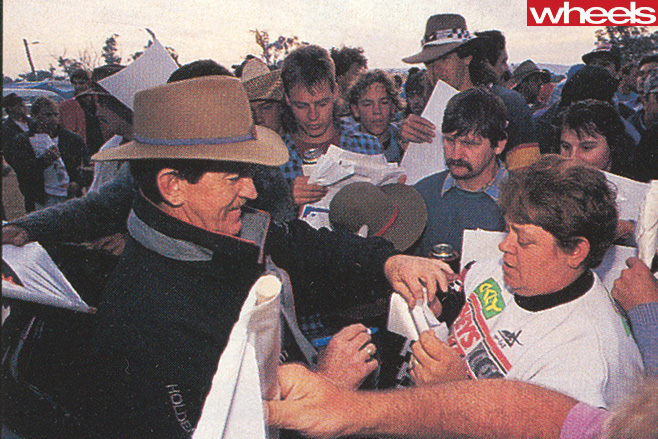 No politics at Bathurst? Perhaps if the good doctor had poked his head out of the pits, where he spent the day helping to change the right (of course!) front wheel of Waldeck's Sierra, he would have noticed the air was thick with intrigue.

Everyone was grumbling about the Nissans, saying "I told you so" as the Skaife/Richards GT-R capitalised on the morning downpour to build up a comfortable cushion.

By the time the race was red-flagged, there had been two torrents and four pace car periods. It made for a long and dramatic – as opposed to exciting – race, marred by ill-feeling and bad sportsmanship at the finish.

What's more, the bizarre circumstances of Nissan's era-ending victory only seemed to harden Fred Gibson's bitterness. "Blew the shit out of them!" he chuckled as he prepared to leave the track. 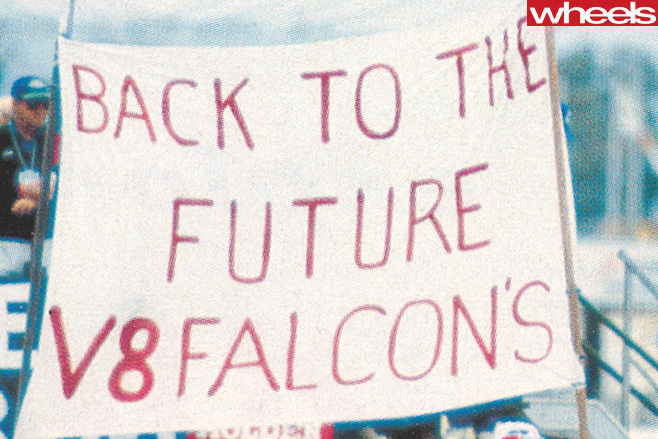 "That's what we came here to do, isn't it? Stuff 'em all, the whole lot of 'em. And the crowd was a bloody disgrace – an absolute disgrace. That's bloody typical of the way Australians have got lately, isn't it?"

After his ordeal, in conditions all drivers agreed were the worst they'd experienced in an Australian race, Richards was relieved and unrepentant. "I had no idea we'd won the race until it was announced. I'm terribly excited about winning. I just felt that what we got out there wasn't warranted."

Johnson, who won the crash-shortened Bathurst 747 in 1981, bit his tongue. Privately, he disagreed with the curtailment, but restricted his public comments to a "rules are rules" acceptance of the outcome.

Later, over a beer, he revealed that he thought he had the Nissan in his sights. "We were looking pretty good. Even if it had've stayed fine, I think we had them in a fair bit of trouble because they had to make a stop for brake pads and discs and everything and we'd already made our last full stop. It would've been a very exciting finish.” 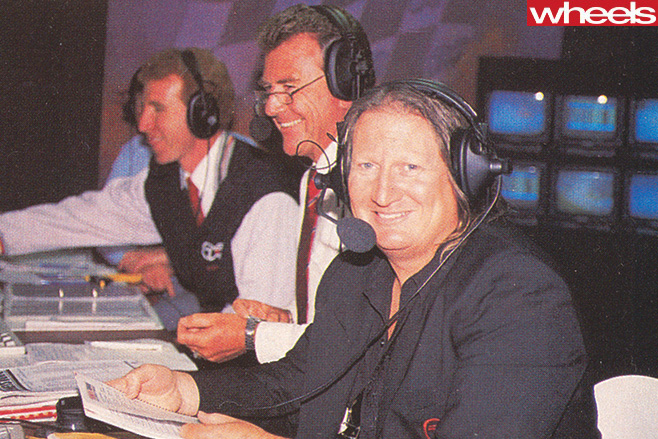 Mulray, meantime, was still shaking his head about his incredible day in the commentary booth long after the closing credits of Seven's telecast. "I feel shell shocked. It's an extraordinary thing to be part of. I said yesterday it was the best race in a long time coming up and in many ways it was the worst race in a long time."

Dr Hewson, whose manner during our conversations failed to convey the enthusiasm suggested by his words, couldn't resist political point scoring when asked to comment on the behaviour of the crowd at the presentation.

"I think it was frustration, a natural frustration about the race not running its course. And, as well, there's a healthy degree of Australian competitiveness when it comes to the automobile industry.

"I go back to my view on the car industry. I think most Australians, if they could look at their own cars – the cars made in Australia – and see they were among the best in the world, that's where we want the industry. They'd like to see a Ford or a GM make a car that'll compete with the Nissans and beat it."

Written, spoken and authorised by...