The R35 Nissan GT-R gets its most extensive makeover yet, attempting to be more things to more people.

The R35 Nissan GT-R (aka ‘Godzilla’) gets its most extensive makeover yet, attempting to be more things to more people.

WHAT IS IT?
The MY17 facelift of Nissan’s halo car, complete with a three-model line-up that includes a sharply focused, Nismo-engineered Track Edition, a much-improved interior, a more modern nose and a greater breadth of talent.

WHY WE’RE TESTING IT?
Because the Phillip Island Circuit and the Nissan GT-R are like a red rag to a bull, except the MY17 – well, the non-track versions anyway – has discovered some semblance of comfort away from the circuit.

MAIN RIVALS
On price, it’s the BMW M4 Competition and Mercedes-AMG C63 S Coupe, both of which are slightly cheaper than the entry-level $189,000 GT-R Premium. But if we’re talking ability, Nissan believes its supercar can mix it with upper-end Porsches and the AMG GT. 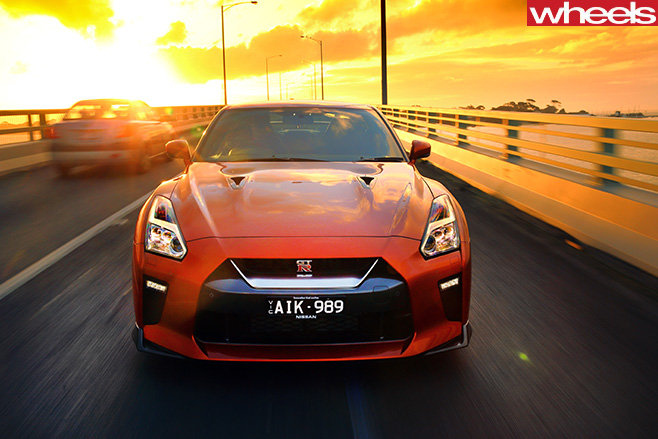 THE WHEELS VERDICT
Reviving the thinking behind the 2001 R34 GT-R – cushy M-spec and crazy V-spec – has unleashed a different side to the once-brutal R35 GT-R. It’s still capable of challenging physics and re-arranging your brain, but it’s now a more liveable, more inviting sports car. Indeed, it’s hard to believe the R35’s core design is approaching 10 years old, which means this extensive MY17 update must be doing something right.

THE WHEELS REVIEW
IT MAY no longer be called Skyline – that iconic name was sent to heaven (for global consumption) when the R35-generation GT-R launched in 2007 – but the spirit of its forebears definitely lives on in this extensive MY17 upgrade. And that DNA link most closely aligns with the 2001 R34 Skyline GT-R. 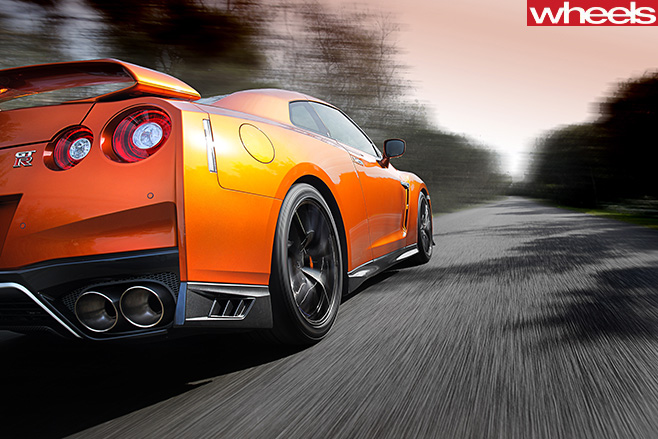 The R34’s new-millennium update was the first to introduce a slightly cushier, fully equipped model – the M-spec (for ‘mature’, would you believe) – to sit alongside the more hardcore V-spec, and that’s exactly the situation we now have here. The ‘regular’ R35 GT-R in Premium and Premium Luxury guises, as well as a dynamically enhanced, Nismo engineered Track Edition.

The most comprehensive makeover in the R35’s near-decade existence falls at exactly the right time. Surrounded by fresh German high-performance armoury, the GT-R needed to reassert what its badge stands for, and what this all-wheel-drive, twin-turbo V6 is capable of, while aiming to appeal to broader cross-section of sports-car buyers. 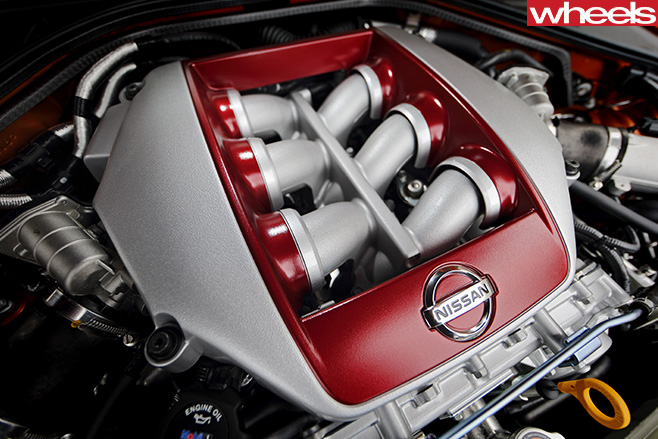 GT-R’s ballistic VR38DETT donk has been tweaked for a bit more grunt – now 419kW at 6800rpm (up 15kW) and 632Nm from 3300-5800rpm – and its performance remains hearty and meaty (its 315km/h top speed outsprints the new Honda NSX by 7km/h). The ultimate difference between new and old is negligible – just 0.2sec faster from 100-200km/h – but as chief product specialist for GT-R/Nismo, Hiroshi Tamura, points out, it’s the difference between being neck-and-neck and being able to show a competitor your stove-burner taillights in an autobahn thrash.

While the MY17 looks fresher, it’s styling driven by functional development rather than fancy embellishment. It has a 20 percent-bigger front air intake, yet due to many aero detail refinements, its drag coefficient improves by one percent. The MY17 also has a stronger body, with more uniform stiffness between front and rear to improve chassis balance, while its suspension, steering and driveline are all refined to smooth over the GT-R’s brutal edges. And it works. 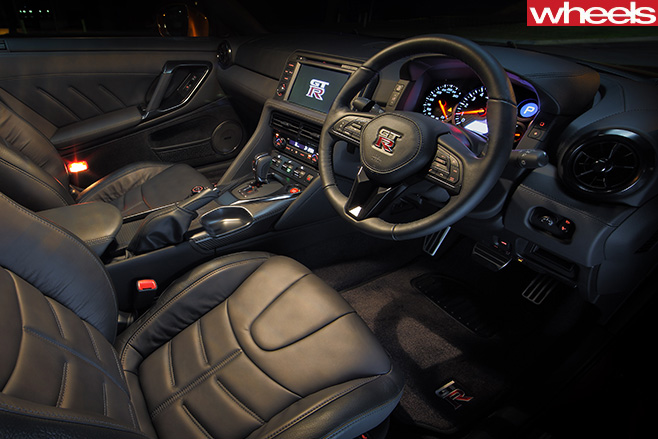 Sitting inside a much-improved interior, with higher-quality materials and a less-fussy dashboard (27 switches have been reduced to 11), the GT-R feels much more sophisticated. Its ride on country Aussie roads is far less of a challenge, and its steering (via a stylishly tactile new steering wheel) demands less effort for pottering about. But the GT-R’s signature dynamic tenacity remains merely a few degrees of steering lock away.

All of this broadens the GT-R’s appeal in an increasingly luxe-focused society, and so does its newfound driveline refinement (though you’ll still get the odd clunk from its rear transaxle). But when you ask for it, the GT-R is still a gloriously brutal beast. 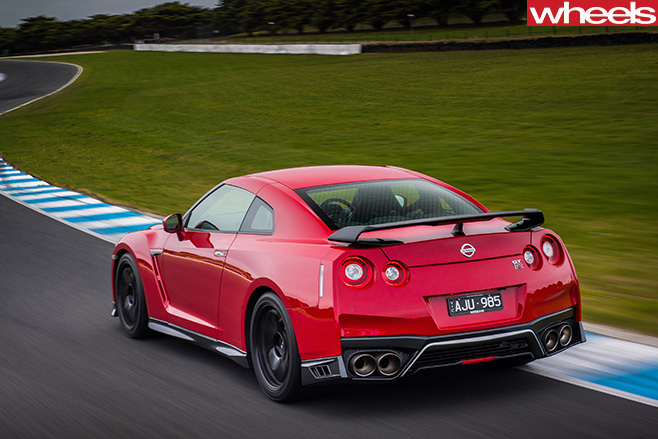 Around the legendary Phillip Island Circuit, the GT-R’s semi-slick Dunlops feel a bit like ice skates when the surface is wet, but as the lines dry out, its true potential blasts through. Unrelenting twin-turbo punch, mixed with all-wheel-drive power down, a rear-biased drive split and tireless Brembo-clamped discs (390mm front, 380mm rear) remind you what Godzilla is capable of.

But then there’s the ‘Track Edition engineered by Nismo’. With a heap of stuff borrowed from the proper GT-R Nismo (rumoured to be joining the Aussie GT-R line-up in 2017), the Track Edition is a seriously focused supercar around Phillip Island. Like the Nismo, it has adhesive bonding on its spot welds for greater body rigidity, completely retuned suspension (springs, dampers, anti-roll bars and upper links), slightly wider front guards to accommodate the Nismo’s broader track, and even fatter 10-inch-wide rear alloys (black forged-aluminium Rays 20s). In an extreme environment such as this, it’s the true embodiment of Hiroshi Tamura’s “car as body” philosophy. 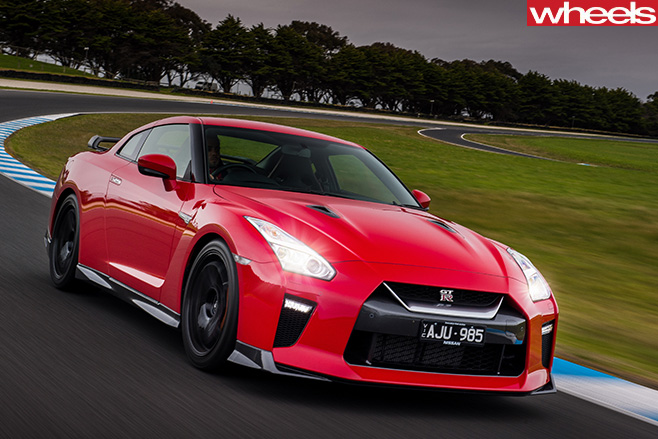 With turn-in so precise and planted you’d think its front end was wired to your brain, the GT-R Track Edition eats Phillip Island whole. It feels pointier and more neutrally balanced than the regular GT-R, able to carry greater corner speeds and carry off a true race car impersonation. I climb out ‘zinged’ from toes to fingertips, reminded of just how great the GT-R can be in its chosen environment. To give you an idea of just how sharp the Track Edition’s talents are, in comparison the regular GT-R feels almost soggy.

But it’s the improvement in the GT-R’s everyday personality that also deserves praise here. Even in MY17 guise, the R35 GT-R will never be a shopping supremo (especially the very firm Track Edition), but this time -- without the grumpiness of the past -- you could. And with extra polish to ensure its future.