Forced induction front-drive fours (and a five) plus two without turbos and two with all-wheel drive make up our field of so-hot-right-now hatches.

First published in the March 2011 issue of Wheels magazine, Australia’s most experienced and most trusted car magazine since 1953.

I was like a starved circus lion at Sizzler as we were presented with our colourful smorgasbord of hot hatchbacks. See, I'd spent the previous two weeks driving a diesel Triton, and in doing so worked up a healthy appetite for devouring twisty country roads. Now 11 tasty morsels representing the hot-hatch class of 2011 sat in the shimmering haze of a blazing hot Heathcote Raceway, raring to be unleashed.

My eye was in. At St Kilda's Esplanade Hotel the previous night, writer James Cleary, photographer Chris Benny and I had spied a Sega Rally arcade machine. In a tacit nod to the theme, the Lancia Delta Integrale was the pick over the Celica GT-Four. Interesting how virtual Scando skills improve up to a point- about four pots - before falling off steeply... 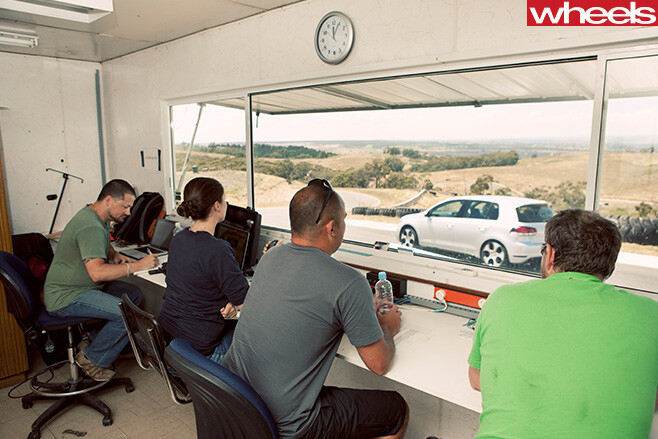 It's not a difficult entry criteria to get your head round: car must have herbs, handling and a hatch. There are commonalities across the field, like frontdrive (all bar the all-wheel-drive WRX and Golf R) and forced induction (all bar the Clio Gordini and Civic Type R). And of course there are differences, like the two size classes of car: Light - Citroen DS3, Polo GTI, Mini JCW and Clio; and, Small – Megane and Focus RSs, Mazda 3 MPS, WRX and Golf GTI and R. Only the Polo has a supercharger (in addition to its turbo), and it and its bigger GTI brother are the only self-shifters here (the Polo is only offered as a DSG).

Our 11-strong field would snake cross-country over some of Victoria's best driver's roads, from Heathcote Raceway north of Melbourne, to Healesville to its east, before continuing south-east for a finale shootout at the Haunted Hills Hillclimb in the Latrobe Valley. A big part of the appeal of hot hatchbacks is that they make fast affordable, so let's consider the cash. The average sticker in the light class is $38K; the Clio Gordini costs a bit more, the DS3 DSport manual a bit less. The least expensive starter, Volkswagen's $27,790 Polo GTI, undercuts this average by $10K, while the Mini JCW, the second most expensive in the field, costs $10K more than the average, at $49,200. 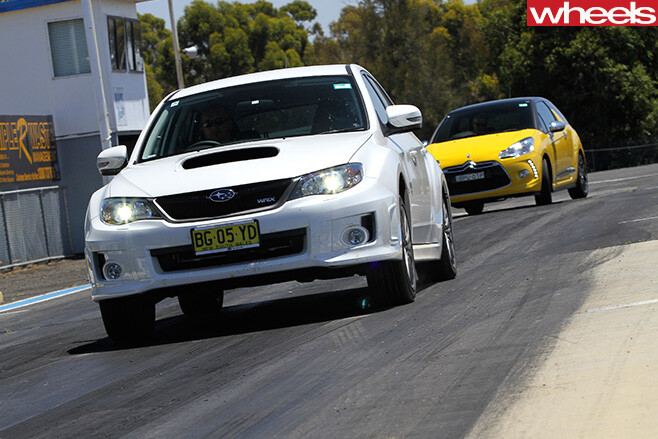 We couldn't get a Subaru STi, but now it's again offered as a sedan, its even more Evo rival than hot hatch. Mitsubishi's Evo junior- the Lancer Ralliart Sport back - while plenty more entertaining than an oil-burning, tri-diamond ute, can't quite mix it with the talented latest crop.

Audi's too-new RS3 and Alfa's Guilietta QV (see p129) will fight another day because the German's not yet on sale and the Italian was just off the boat.

Our road-test crew fell into natural roles. Contributing writer Glenn Butler led the Mexican army, armed with his local knowledge and handy wheel skills. COTY wranglers 'Disco' Stu Orford and James 'Cletus' Lacey sorted grub and took the piss. Butler's buddy, Dave McMaster, Brunelli's mate, Darren Fahey, and father of the Commodore Cup, Maurie Platt all proved top blokes to have around when you need a job done, a car spanked, or a pot drained. Driver trainer, racer, engineer and COTY judge Samantha Reid dissected cars and lap times, even drivers. While Melbourne race driver Sam A bay is the fella you want if you're after consistently quick driving and ace feedback.

Two years on from the Black Saturday bushfires that devastated the region, the landscape surrounding Marysville, in Victoria's Murrindindi Shire, remains stark. Blackened Mountain Ash stand free of foliage, others with a fuzz of small leaves, making them appear like towering, green pipe cleaners. 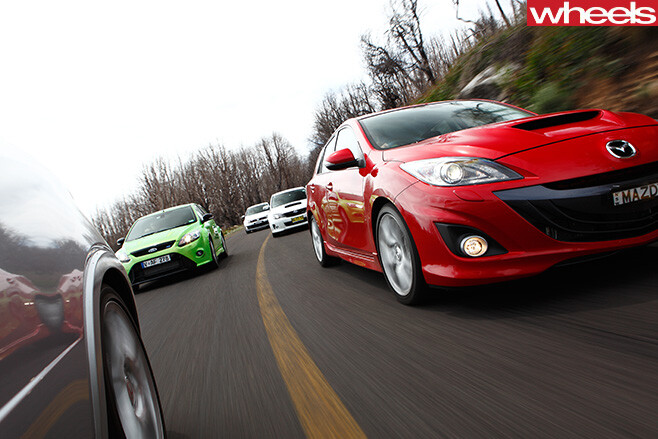 "It's the only one so far that's stepped out on me unexpectedly," warned James Cleary of the Mini John Cooper Works. I approached with a degree of caution.

The Mini's performance is instantly gratifying. Less than a kay down the road, I was convinced. This is the very blueprint for a hot hatch. To some, the dash and cabin were evocative of the original Mini. Others thought it naff, citing the switchgear and that enormous central speedo. It certainly feels expensive and well-built- the Mini's doors are chunky, and heavier than you'd expect for its size- which it bloody should for almost 50 grand.