Almost by definition, the most exciting newcomers of 2016 will be high-performance sedans and hatches – quick but practical cars that are within reach of people on average earnings.

Ford’s Focus RS (pictured top) will be the wildest hot-hatch to join their ranks. It will sell alongside the Focus ST in Ford showrooms from February. Unlike limited-run previous versions, the new RS will have all-wheel-drive, which will help it deploy the 2.3-litre Ecoboost four-cylinder turbo engine’s prodigious 257kW.

Focus RS highlights include a dynamic torque vectoring system, a drive mode system with launch control and a ‘drift’ mode, and selectable sport suspension. There will also be 19-inch alloys and gripping Recaro front seats. The Subaru Levorg is set to roll up around the middle of 2016. This wagon version of the WRX will fill gaps in the local line-up opened left by the departed WRX hatchback and Liberty wagon. It will offer the performance of the former – though only through a CVT automatic, not a manual – and much of the space and practicality of the latter.

We’ll also be treated to a Peugeot 308 GTI (pictured below) in February. Considering how good the mainstream 308 line-up is – and the fact the GTI will be a manual-only front-drive with a 200kW 1.6 turbo – it should be a cracker. 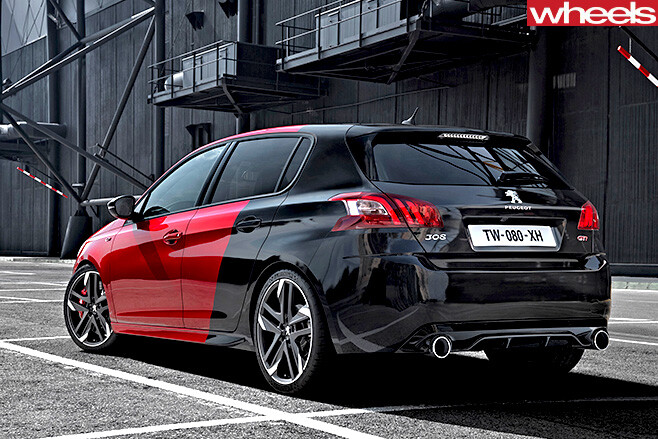 In recent years, there have been few Japanese hot-hatch alternatives to cult Euro offerings such as the Volkswagen Golf GTI and Renault Megane RS275. While our fingers are still crossed for a new Mazda 3 MPS, the Hiroshima brand recently hosed down speculation that a hotter 2.5-litre turbo version powered by the CX-9’s new engine would join the 3 range.

We’d also have welcomed the 228kW Honda Civic Type R offered overseas, with its direct-injected 2.0-litre turbo four-cylinder. But with the ninth-generation Civic set to be superseded, the ordinarily rev-happy Honda’s first snail-assisted Type R looks highly unlikely to make it to Oz. In traditional sports-car form, we can expect to see the Fiat 124 Spider, a restyled version of Mazda’s new ND MX-5 with the Italian brand’s own engines and gearboxes. We’re enthused about the revival of the 124 Spider badge, and by the prospect of a factory turbocharged derivative of the religiously non-turbo MX-5.

Hot limited-edition versions of the Ford Falcon badged ‘XR Sprint’ will also roll from Broadmeadows in 2016, in a send-off for the model before Ford shuts its local manufacturing operation in October. The XR Sprint will come in both V8-powered XR8 and turbo six cylinder XR6 Turbo forms, and while the Falcon has fallen out of fashion, the pair should still be ripper drives and a fitting finale.