The Peugeot 308 GTi is France’s answer to the Volkswagen Golf GTI. How will this capable hot hatch measure up when it arrives early next year?

The Peugeot 308 GTi is France’s answer to the Volkswagen Golf GTI. How will this capable hot hatch measure up when it arrives early next year?

WHAT IS IT?
Hard-charging performance version of the 308, easily the best Peugeot launched this century. It’s five-door and six-speed only, but Australia will take both the 184kW and 200kW versions of the 1.6-litre turbocharged engine developed for it by Peugeot Sport.

WHY ARE WE TESTING IT?
It won’t reach Australia until next year, probably arriving in February. The international launch, staged recently in Portugal, was a chance to see if Peugeot’s new-found confidence and competence extends into hot-hatch territory. There was quality time on both road and track, but only in the 200kW top version with its Torsen differential, bigger front brakes and a larger wheel and tyre package. 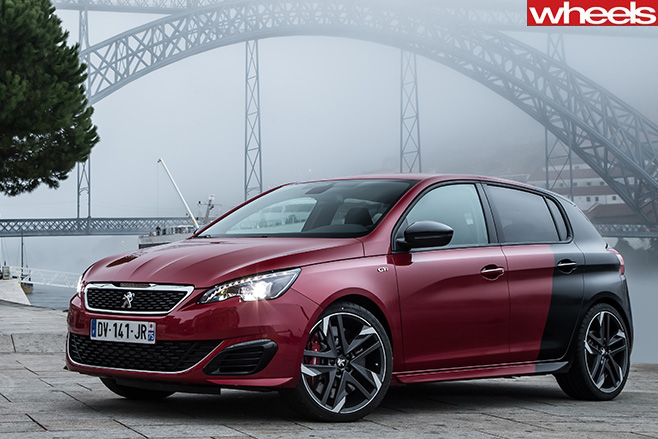 MAIN RIVALS
Depending on where exactly the 200kW Peugeot 308 GTi is priced, it will bump into a Golf, either the awesomely able GTI Performance or the all-wheel-drive R. While it’s less extreme than any Megane RS, and more expensive than the Giulia QV or Focus ST, it’s possible the 308 GTi will be cross-shopped against these, too.

THE WHEELS VERDICT
France produces an alternative to the Golf GTI… for some. While the 308 GTi has power and poise, its (likely) prices and the lack of an automatic option will limit its appeal in Australia.

THE WHEELS REVIEW
WITH THE tachometer swinging into the zone between between 6000rpm redline and 6500rpm cutout, it’s time to hit the brakes. Hard. Four-piston calipers chomp on the new 308 GTi’s big ventilated front discs, dragging the speedometer needle swiftly down from 170km/h or so. Slap the six-speeder back to third, and thread through the slow, tightening right at the end of the straight before aiming at the first of the following left-hander’s two apexes. Now begin to feed the 1.6-litre turbo some throttle. The Peugeot’s Torsen differential and beautifully smooth chassis-stability electronics convert pedal pressure into authoritative acceleration. 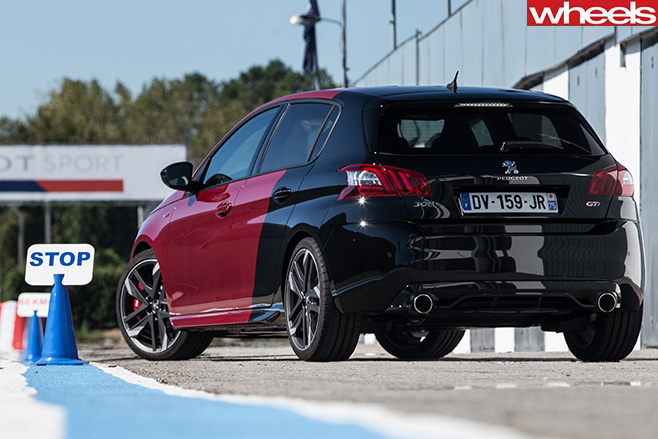 We’re at a small racetrack in northern Portugal. This circuit, near Braga, not far outside the city of Porto, is a little unusual. It rings a small aerodrome, and the long straight closely parallels the take-off and landing strip for Cessnas. But the rest is a snaky series of varied curves, which highlight the French hatch’s great grip, accurate steering and foolproof balance.

This is Stage Two of Peugeot’s introduction to the 308 GTi. Yesterday was spent on public roads, weaving through vineyards and attacking squiggly mountain roads inland from Porto. So we already knew one side of the car’s character. Its ride is reasonably civilised for something so corner-capable. The boosted engine is torquey, effortless. And the car’s all-round refinement is inviting.

This is an important point, Peugeot insists. Although hot hatches are usually part of a multi-car stable, they are also the most frequently used. The company cites research that shows 61 percent of hot hatches sold are a household’s primary car. 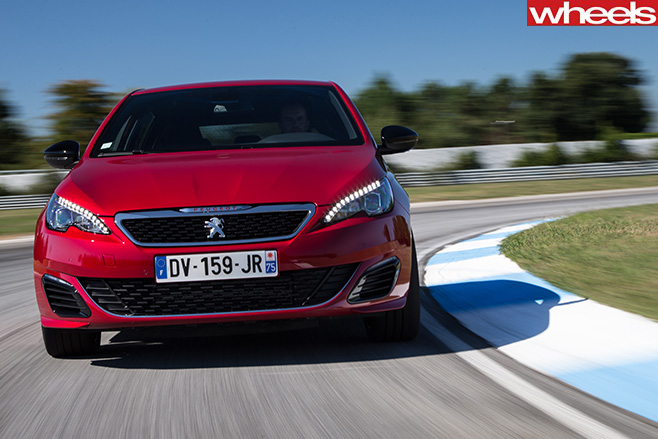 So the 308 GTi was envisioned and developed to be the kind of hot hatch that could be driven every day. Which means that this new Peugeot must challenge the reigning champion in this role, the Golf GTI. While Peugeot’s ambition is to be admired, there are some problems with its plan, especially in the context of Australian preferences and expectations.

For starters, the 308 GTi will be produced only with a six-speed manual gearbox. The car’s potent engine produces more torque than the six-speed Aisin-made automatic employed in lesser 308s can handle. Ask when an automatic might be ready for the GTi and the evasive answers indicate it’s years away, at best.

Second, the GTi seems sure to cost more than the GTI. With the Peugeot’s arrival in Australia scheduled for sometime in the first quarter of 2016, importer Sime Darby is still some way from finalising prices, but the official line is $45,000 to $55,000. This means that the least expensive Peugeot 308 GTi will be priced higher than a basic Golf GTI manual, and the most expensive version of the French challenger could cost more than a Golf R. 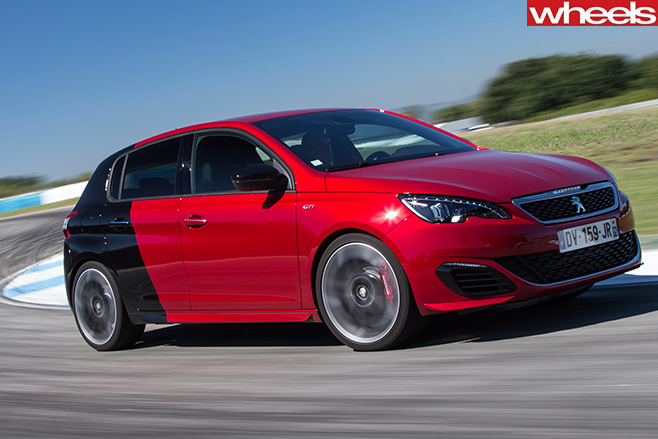 Both versions of the 308 GTi will be shipped to Australia. The basic one comes with the 184kW version of Peugeot’s 1.6-litre turbo four. It shares the same Peugeot Sport-developed suspension (increased negative wheel camber front and rear; 11mm-lower, stiffer springs; firmer dampers). But the basic 308 GTi misses out on items that make the 200kW version presented in Portugal rather special. It rolls on on 18-inch Michelin Pilot Sport 3 rubber, not the slightly wider 19-inch Michelin Pilot Super Sport tyres that endow the 200kW 308 GTi with tenacious grip and wonderful steering sharpness. Also missing from the 184kW 308 GTi spec sheet are the big, 380mm front brakes from British outfit Alcon and the Torsen differential.

Both versions of the engine are mechanically identical, according to Peugeot Sport. It’s software that makes the difference, removing a slice from the right-hand end of the torque plateau of the low-power variant. StilI, its 184kW claimed maximum is a handy 22kW more than the base GTI and 15kW more than the GTI Performance. If Peugeot’s 0-100km/h claim for the car is proven correct, the basic 308 GTi will be quicker than both.

Because the 308 is a relatively light car for its size, and because the GTi is front-drive, the 200kW also has a better power-to-weight ratio than the all-wheel-drive Golf R. While it will never have the traction to beat the Volkswagen in standing start acceleration, the powerful Peugeot can deliver similarly thrilling rolling acceleration. At least in the dry… 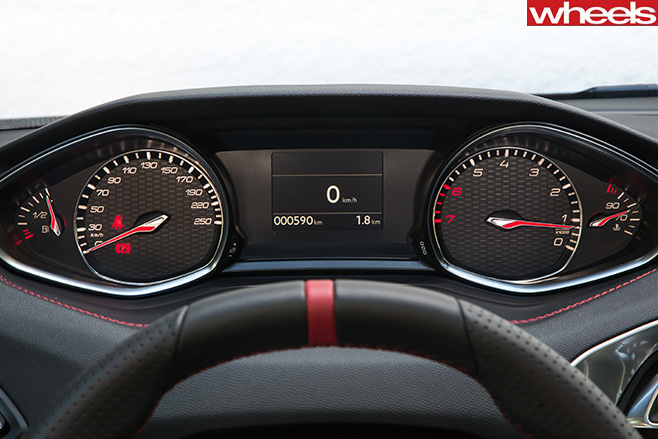 The Peugeot Sport developed engine is a fine piece of work. Though it has 20 percent less capacity than the 2.0-litre turbo fours favoured by other European C-segment hot hatch manufacturers, this isn’t something you feel. This engine is a richly productive source of practically lag-free torque. It’s also quiet, perhaps too quiet for some tastes. There’s little to hear until close to 5000rpm.

Hitting the Sport button in the 308 GTi’s centre console activates an amplifier and speaker to relay some engine-bay audio into the cabin. It sounds synthetic and contrived. Peugeot Sport says a flappy-valved exhaust system was considered too expensive for the 308 GTi. Other changes invoked by the Sport button are sharper throttle response and a reduction in steering assistance levels. Both are nicely judged: the steering doesn’t become stupidly heavy, just a little more meaty, and the Sport throttle map simply makes the car feel more feisty.

Again for reasons of cost, the GTi is not equipped with variable dampers. It also retains a torsion-beam rear-end, just like the standard 308. But Peugeot Sport seems to have pretty much nailed the sweet spot with the choices they made. Though the car rolls very little and is understeer-resistant at sane-ish public-road cornering velocities, the firm suspension rounds road surface impacts quite nicely. There’s a real sense of discipline, but it’s not the harsh kind. 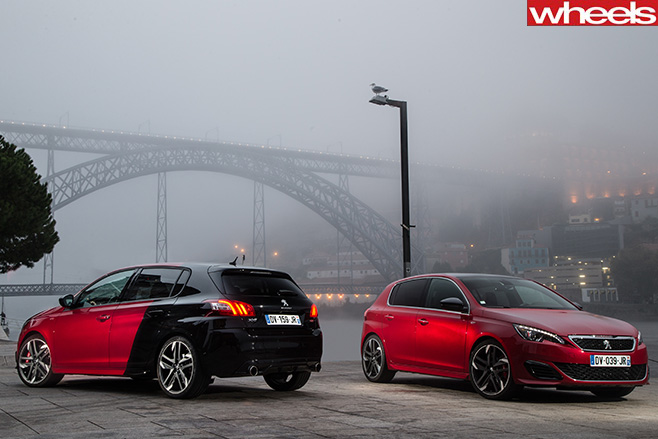 While the GTi uses the same 3.0-turns-lock-to-lock rack as the standard 308, the excellent 19-inch tyres and the extra helping of negative camber add the right amount of steering sharpness. Feel isn’t fabulous, and steering weight is sometimes affected by engine torque and Torsen differential activity, but these are forgivable flaws considering how much torque the front wheels must deal with.

More serious is the rubbery feel of the manual shift. Gearbox internals are toughened for the GTi, but the shot-peening and annealing treatments do nothing to improve its action. A car like this deserves something that feels oily and slick, quick and precise.

The 308 GTi’s quiet visuals are attractive. There are new front and rear bumpers, a twin-tipped exhaust, but no shouty spoiler. But the clean and conservative shape of the 308 looks especially fine when sitting a little lower and with wheels and tyres that fully fill its arches.

There’s no lapse in tastefulness inside, either; some red stitching here, a little shininess there. Leather and Alcantara cover the sports front seats fitted standard in the 200kW 308 GTi. These are excellent, blending comfort and support. The Peugeot’s simple dash is classy, but as in every other 308 the novel arrangement of steering wheel and instruments will not suit everyone.

But no one will dispute that a variety makes the automotive world a richer and more engaging environment. And the new 308 GTi certainly adds a welcome soupcon of French flavour to the hot-hatch class. While it lacks what’s needed to be a truly threatening Golf GTI rival, it certainly presents an alternative.