High performance sports cars in 2016 will be a game of two halves – the awe-inspiring and the somewhat more accessible.

The Ferrari 488 GTB and a reborn Honda NSX will headline the former, while among the latter will be the BMW M4 GTS, the Mercedes-AMG C63 Coupe, and Porsche’s updated Boxster and Cayman.

With a mid-mounted twin-turbo 3.9-litre V8 sending 493kW to the rear wheels, Ferrari’s 458 successor, the 488 GTB (pictured below), is on the front foot against new and renewed rivals. The most obvious direct opponent is Lamborghini’s enhanced Aventador LP750-4 SuperVeloce (pictured below). This powered-up version will bring an extra 37kW and a weight saving of 50kg, plus a big increase in downforce and improved chassis rigidity.

We’re also likely to see the 4.0-litre twin-turbo V8 Lamborghini Urus, which is the brand’s second SUV, and its first since 1993. Honda’s NSX, reborn as a hard-hitter complete with a 373kW twin-turbo 3.5-litre V6 and three electric motors, is set to enliven the segment in the second half of the year. And in another Eastern assault, we’ll be treated to the hotter, 447kW Nismo version of Nissan’s GT-R.

Audi’s second-generation R8 will arrive around June, bringing an evolutionary new look, more power and speed, and greater efficiency. Importantly, the R8 won’t trade away its renowned user-friendliness, though it will drop the V8 to become a V10-only proposition. Detroit will give the European sports car establishment something to think about if its lightweight GT40 tribute, the Ford GT arrives, but it’s doubtful we’ll see it here. The circa-450kW 3.5-litre turbo V6 powered mid-engined supercar is the Blue Oval’s most serious effort to date. More likely in 2016 is the arrival of the brand’s 370kW Mustang Shelby GT 350 – but that too is a long shot. At least we get the 306kW standard Mustang, which will launch here in January. The twin-turbo V8 Mercedes-AMG C 63 Coupe will put Benz firmly back in the fight with BMW’s regular M4.

McLaren will give us a two-car line-up and a baby brother for the 650S, with its 540C and 570S Coupes, which have the Porsche 911 Turbo fixed in the crosshairs. 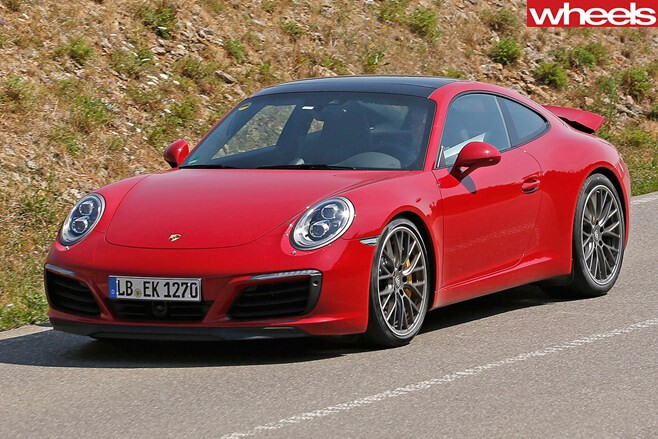 Porsche, meanwhile, will be battle-ready with facelifted and updated versions of its 991 series 911 coupe and cabriolet. With the introduction of downsized turbo engines, 2016 will bring turbo 911s – if not 911 Turbos – for Carrera cash.

The German brand will also deliver a facelifted Boxster and Cayman, complete with boxer four-cylinder turbo engines. The talented Zuffenhausen engineers will make sure these are more impressive than they sound.