By Jesse Taylor and James Whitbourn, 04 May 2009 Features 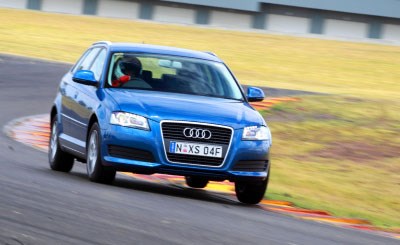 The 1.4-litre, seven-speed DSG Audi A3 boasts a 5.8L/100km ADR81 combined cycle result (the best in the field) but it consumed 98RON at a rate nearly three times that (15.6L/100km). Turbocharged cars can suck fuel at a frightening rate when the throttle is always pinned, as is the case on a race track, but this result surprised even us. While the little Audi was obviously trying hard, it just wasn't fast or fun. Slowest in acceleration (9.8sec against a 9.5 claim) and slowest around the track (a full eight seconds a lap slower than the 911), the Audi felt and sounded flat. The $2K cheaper Golf GT (admittedly with turbo and supercharging), simply ran rings around the Audi.


Steering wheel-mounted shifters would have improved the operation of the DSG, and a fully-switchable ESP would allow the chassis to shine brighter. But as it stands, the Audi had a lock on last place; six percent behind 8th place and 15 percent adrift of the winner. JT