BUYING a muscle car is one of the silliest decisions you can make. Such vehicles are impractical, rarely permitted to stretch their legs under our Stalinist speed limit regime and absolutely love a drink. So much for the ‘head’ side of the equation.

The 2015 Mustang GT that now resides in my garage appeals massively to my heart. It looks fast standing still. I turn it on and off more than necessary simply to hear the starter morph into a classic V8 rumble. The boy racer in me selects Track mode around suburbia on the very off chance that local streets are transformed into a street circuit. And the new ’Stang always gets ‘popped’ at traffic lights.

This car stirs the senses. I’ve owned a number of Aussie cars, but since my daughter arrived into the world, a medium-sized German SUV with questionable emission claims has fulfilled the role of family conveyance.

A year ago I decided I could finally buy a car purely for me. Call it a mid-life crisis, but like many red-blooded men, I’ve rediscovered my youthful love for muscle cars. They give eco-virists conniptions for their superb ability to convert fuel into noise, smoke and wheelspin.

As to which brand and model I’d choose, a process of elimination soon ensued.

I’ve always been fascinated with affordable performance machinery and Holden’s new 6.2-litre Commodore was a serious contender until I found myself justifying its four-door body on the basis it was good for the family. For the same reason I rejected Chrysler’s otherwise impressive SRT. VW’s clinically impressive Golf R was also briefly considered until my wife noted it was “just another Golf”. 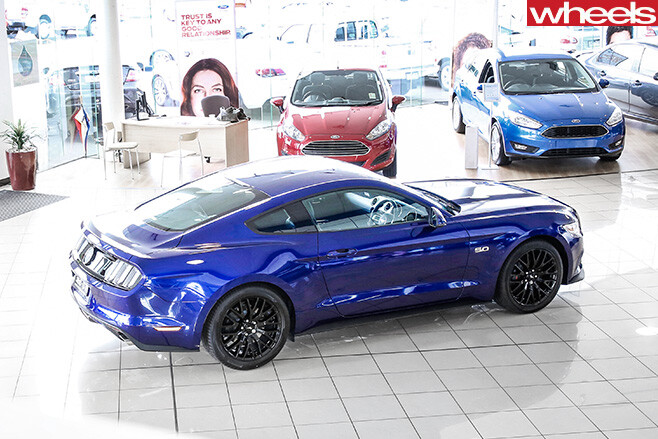 Enter Ford’s inspired decision to produce the new Mustang in right-hand drive. I’ve always admired the ’Stang’s iconic status. This latest version is desirable because it references its ’69 ancestor in many ways. The fastback shape remains timelessly familiar and aggressive bonnet bulges hint at power lurking beneath. A Mustang it had to be.

Now to the fun part; choosing my exact specifications.

Convertibles look good with the top down but tend to scuttle about too much. Big tick for the hardtop. And what’s the point of buying a muscle car only to skimp on fuel, so it had to be a V8 – with a manual, because they force you to really drive.

Finally, not long ago my daughter asked why almost every car on the road was silver, grey, black or white, when such colours are “boring”. She was right; the Fusion Blue paint I chose works well on just about any Ford product. Only one problem remained – the order books were almost full. But my friendly Ford dealer said if I committed early he could ensure I received one of the first off the boat. So I signed up in April, expecting my car would arrive in early November. It finally arrived on December 11.

When the big day arrived I had mixed emotions. On the one hand, I was excited to finally take possession of my new conveyance; on the other, it seemed a tad stupid to buy a car I’d not test-driven, sat in or even seen.

The build-up to the handover was chaotic. Wheels was there to capture the moment and finally I was invited to step into the showroom and lift its veil. Luckily, the Mustang didn’t disappoint. It is drop-dead gorgeous from just about every angle. 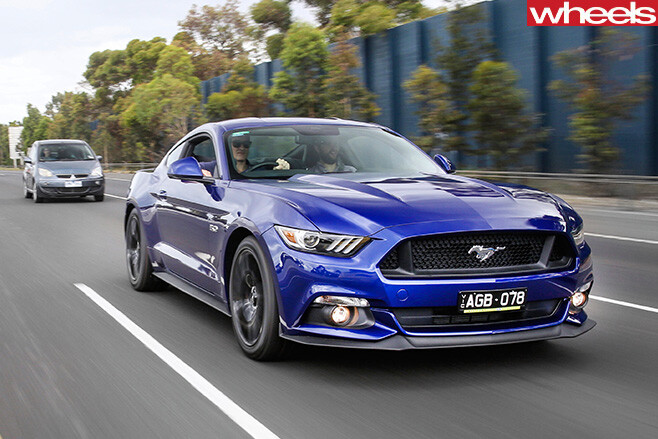 Behind the wheel, the big Ford is grunty yet pleasingly light at the controls. It pulls lustily in any ratio, and acceleration from low speed in third is guaranteed to bring a smile to any face.

The ’Stang remains an analogue car in an increasingly digital age. And that’s no bad thing.

POSTSCRIPT: One month and 1200km on, I’m more than happy with the Mustang. It has a few minor shortcomings: the plastic housing the transmission tunnel is pretty low-rent; the old-school cable handbrake is oriented for LHD; when pushed, the car drinks like a sailor after a year at sea; and while it earns many admiring glances from males of all ages, women seem oblivious to its muscular charms. But it’s huge fun to drive, the gearbox is loosening up nicely, and I still look at it in the garage most nights before heading to bed. Yes, I love this car.

Banking on a media profile

HE WAS once known merely as the son of John Elliott, the larger-than-life business tycoon immortalised by Rubbery Figures as the man who loved to eat so much he had a food company, loved beer so he bought a brewery, and loved footy so he got a football team.