The brief is simple: build the fastest, most luxurious and most expensive SUV in the world.

MEET the Bentley Bentayga. It’s powered by a 6.0-litre W12 that develops more than 405kW and 720Nm, enough grunt to take it comfortably beyond 275km/h, say the Bentley boys. The interior is a sensual delight, redolent with the rich tang of high-quality leather, and suffused with the warm glow of wood and sparkling highlights of white-bright chrome. And the price? Don’t expect much change from half a million bucks.

The Bentayga makes its public debut at the Frankfurt motor show this month, but in the course of the past few months we’ve spent time with Bentley’s development engineers and designers, and driven lightly disguised, near-production prototypes. And, yes, we’ve driven them off-road.

Bentley’s new SUV is built on a variant of VW Group’s MLB architecture (longitudinal front engine, all-wheel drive) codenamed PL73. It’s similar hardware to that used for the new Audi Q7, but the Bentayga gets its own suspension and brakes, and debuts VW Group’s all-new W12 engine. With its own sheetmetal and a full Bentley interior – 12 hides of leather and the choice of nine wood veneers – insiders claim 80 percent of the car is unique. 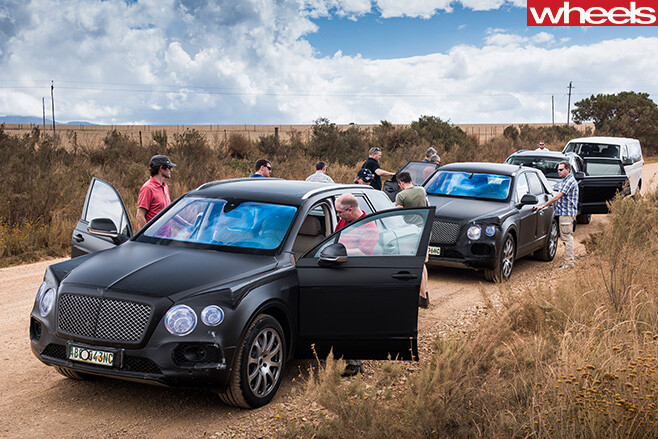 “When we started, we had no idea what a Bentley SUV should be,” Bentayga project leader Peter Guest told us. What Guest and his team quickly learned was that potential buyers wanted something faster, sportier and much more luxurious than a Range Rover.

Although off-road capability is important for credibility, customers didn’t want the styling compromised to meet Range Rover levels of approach and departure angles. And while they liked the idea of a more practical Bentley, such considerations didn’t extend to everyday concepts like towing capacity. “If you can afford a Bentley SUV,” said one, “your boat is too big to tow.”

Heart of the Bentayga is the W12 engine. Basic architecture is similar to the outgoing W12 – the staggered cylinder layout delivers a remarkably compact powerplant – but almost all the hardware is brand new. The engine features both direct and port injection to help meet emissions, performance, drivability and cold-start targets, along with twin-scroll turbochargers and a cylinder deactivation system that shuts down one bank of cylinders, effectively turning the engine into a narrow-angle V6. 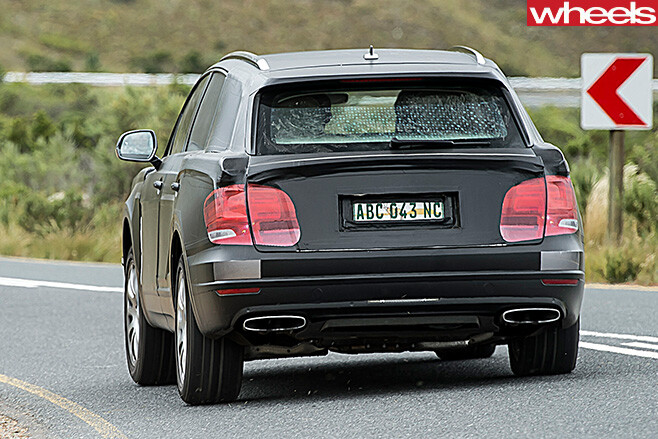 A new oiling system has been developed to match the Bentayga’s off-road capability, with pick-ups and feed that ensure good oil supply throughout the engine even with the vehicle tilted 35 degrees, and suction pumps to scavenge oil from the turbochargers.

In addition to the mighty power and torque outputs – final figures have yet to be confirmed – the new W12 meets the latest European emissions standards and will give the Bentayga a range of 600km along with a 0-100km/h acceleration time comfortably under 5.0sec. It also weighs 30kg less than the outgoing W12 and is assembled on a new line at Crewe in the UK, which is now VW Group’s sole source for the engine.

The aluminium Bentayga body-in-white is built on its own line in the VW Group plant in Bratislava that also supplies bodies for the Porsche Cayenne, VW Touareg and Audi Q7, then shipped to Crewe for painting and final assembly. 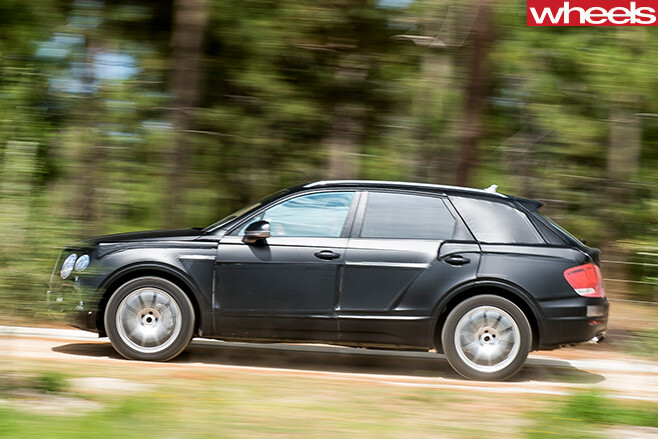 In basic form and proportion, Bentayga is similar to the EXP-9F concept that affronted many observers at the 2012 Geneva Show. In detail, though, it’s very different. The front is much more restrained, with a four-headlight graphic, grille and lower front fascia treatment that recalls the Continental GT. The headlights are flush with the body surface, and the headlight washer is hidden in the outer daylight running light, eliminating an unwanted shut-line. Getting this detail right was “quite a lot of work”, according to exterior designer Sangyup Lee.

A lot of work also went into the surfacing of the front corner to take your eye away from the front overhang, and the side features a strong character line running back from a B-themed front vent, plus the hint of a Continental-style haunch over the rear wheel. The bodyside stamping, which includes the one-piece rear quarter panel and the door apertures, is the largest, deepest draw-aluminium pressing in the world.

At the rear are two large exhaust outlets and split tail-lights that reprise the B-theme. 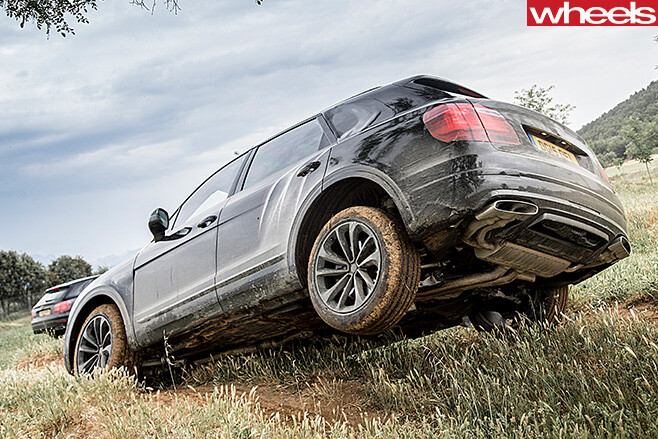 The interior, designed by Darren Day, is richly and beautifully executed, with signature Bentley cues such as quilted leather and knurled metal. Delightful details abound, from woven-look metal audio system speaker screens to tiny 1mm bright chrome trim around the switchgear on the centre console. The dash fascia combines design themes from both Continental and Mulsanne, but looks sportier and more dynamic than either. Four and five-seat versions of the car will be offered, with the four-seater repurposing the front buckets in the rear.

Effortless. Imperious. Invincible. That’s how the Bentley Bentayga feels on the road. The new W12 delivers a creamy surge of power from the moment you crack open the throttle, accompanied by a gently muted rolling-thunder soundtrack. Though you have the option to shift the eight-speed automatic transmission manually via steering wheel paddles, there’s really no point because there’s always an abundance of torque when you want it, and on a winding road the Bentayga simply digs in and grunts hard out of corners. The standard torque split of 40/60 front/rear helps, as does the accurate, nicely linear steering. 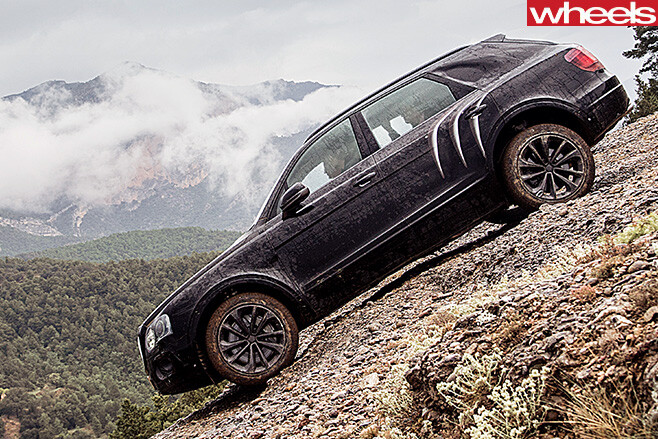 Ride quality is very good – our prototypes were running on 285/45 R21 Pirelli Scorpions; 20in and 22in wheels will also be available – and body control is outstanding, thanks to an all-new anti-roll system dubbed EWAS. Bentley offers four on-road dynamic modes: Comfort, Bentley, Sport and Custom. Steering effort is constant in the first three, but can be tuned in Custom. Idle-stop and coasting fuel-saving measures are available in Comfort and Bentley modes. (Bentley mode, by the way, represents what the development team believes is the ideal set-up for the car.)

In Dynamic mode the EWAS system, which uses 48-volt electric motors on the roll bars to instantly twist against suspension inputs, keeps the big Bentley uncannily calm and composed through corners. In Bentley and Comfort modes, more roll is allowed, but as we drove the prototypes Guest and his team were debating whether to maintain that strategy because the roll control system does not impinge on ride comfort. We’d vote to keep the roll to a minimum regardless of setting as it helps make the 2300kg Bentayga drive much smaller and lighter than it really is. 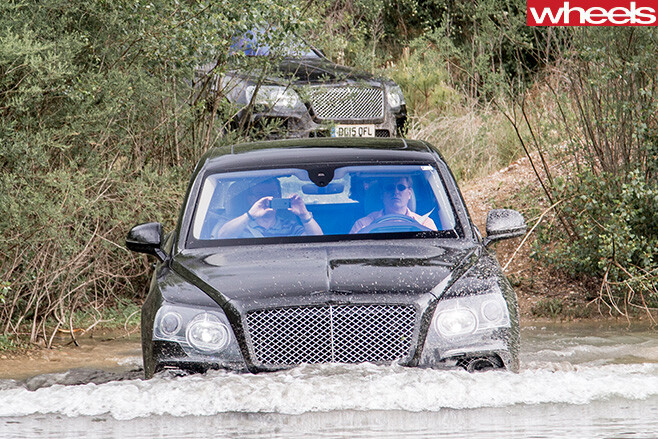 On any road, the Bentayga will humiliate a Range Rover and make a Cayenne Turbo feel uncouth. Off it, a Range Rover has the edge, but not by as much as you might expect. There’s so much torque that a low-range transfer case is pretty much unnecessary, and modern electronics – the Bentayga is crammed with no fewer than 90 ECUs, almost double the number in a Conti GT – handle the rest.

There are four off-road modes – Snow/Wet Grass, Gravel, Mud/Ruts and Sand/Desert – all of which vary parameters such as ride height, throttle response, traction, steering and transmission shift protocols. As we found scrabbling around a slick, rocky hill in Spain, the Bentayga’s main limitations in really rough stuff are its approach and departure angles.

WHEN the wraps came off the Bentley EXP-9F concept at the 2012 Geneva show, the faces of those present ran the full gamut of emotions from bafflement to abject horror. Lacking the muscularity and design restraint that epitomises the marque, the EXP-9F pointed to a worryingly brash new-money future. Despite penning a string of brilliant Audi, Skoda and Bentley designs, stylist Dirk van Braeckel’s career hasn’t recovered from the EXP-9F debacle, and Sangyup Lee’s remedial efforts to transform it into the current Bentayga help explain the car’s lengthy gestation.

THE Bentayga is not the answer to a question no one’s asking. In January, Bentley said the segment – Range Rover, Porsche Cayenne, the more expensive Mercedes GLEs and BMW X5s – would grow 63 percent to 20,000 vehicles a year by 2020. By May it had revised that estimate up to 30-40,000 vehicles.

It seems the rich are getting richer, especially in the US, China, the UK and Germany, which will be the Bentayga’s four largest markets. What’s more, they’re starting to buy fewer sedans – Flying Spur sales are slowing – and want something more upscale than a mere Range Rover.

BENTLEY boss Wolfgang Durheimer decreed the Bentayga would launch only with the W12 engine to clearly position it at the top of the ultra-luxury SUV heap, at least until the Rolls-Royce, Lamborghini and Maybach SUVs appear.

Bentayga will be offered with a version of Bentley’s 4.0-litre V8 in a year or so, though, and on this car the EWAS anti-roll system will be optional.

Bentley’s Mulliner division will offer options such as bespoke exterior and interior colour and trim, as well as the picnic set shown in the EXP-9F concept.