It’s the biggest, baddest circuit on the planet, the venue where the world’s hypercar manufacturers duke it out for ultimate laptime bragging rights, and the home of one of the world’s most grueling 24-hour endurance race. And you, my fellow Regular Joe, can rock up on virtually any given weeknight and rip around it in whatever vehicle you fancy.

I’ve wanted to drive the Nurburgring Nordschleife ever since I first experienced it in Gran Turismo 4 as a teenager. As time passed and my awareness of the track and its mystique grew, that want multiplied exponentially. It’s Everest for car fans, and what self-respecting mountain climber doesn’t want to eventually have a crack at the tallest peak? 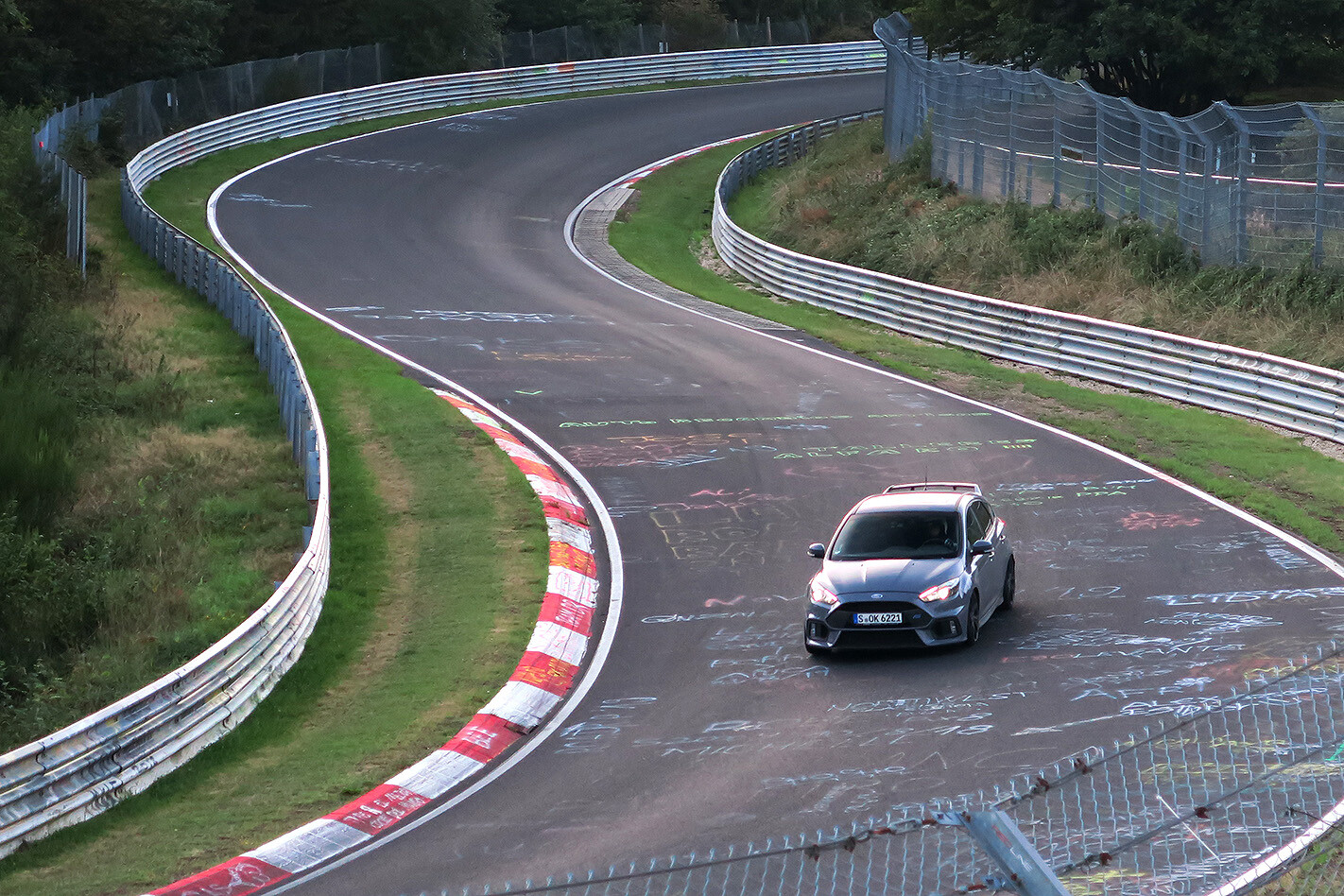 A month ago I was heading to Germany for a bit of R&R, and that provided the perfect opportunity to tick the Nurburgring box. It’s an easy drive from Frankfurt, and it so happened that the track would be open on the evening of our first full day on the ground. Perfect.

The only thing is… the Nordschleife is a dangerous place. Plug “Nurburgring crash compilation” into Youtube and you’ll see why. Have a big prang there and even if you walk away unscathed, you’re going to have a mega invoice from the circuit’s owners for the cleanup crew, lost earnings due to circuit closure and the replacement of any guard rails that your poor car managed to chew up as it pinballed between the ‘Ring’s unforgiving Armco. Oh, and a towing bill for your lump of scrap metal and/or the cost of a helicopter ride to Koblenz hospital if you really mess yourself up.

And that’s if you’re driving your own car. I rented the excellent Ford Fiesta ST to get from Frankfurt to the Nurburgring. Sadly this is as close as it got to the track

As a tourist I had to rent something if I wanted a crack at the 'Ring, and with rental companies like Hertz aggressively policing Germany’s most famous racetrack to ensure customers aren’t wrecking their property, the only solution was to rent a racecar from a company that’s comfortable having strangers take their cars onto the ‘Ring.

But even then, the financial fallout of having a prang is significant. The insurance excess for the car I selected – a Suzuki Swift Turbo, rented through Rent4Ring – was €8000, or AU$13,000. Stories of fun-seekers winding up in the hole for tens of thousands of dollars are common at the Nurburgring. So how do you minimize that risk? By firing up your Xbox, Playstation or PC.

The Forza Motorsport, Project Cars, Assetto Corsa and Gran Turismo franchises all feature the Nurburgring Nordschleife in high-def, with everything from the guardrails to the graffiti rendered in lifelike detail. The ‘Ring’s notoriously bumpy and cambered surface has also been modelled accurately by these games, as has its 300 metre vertical elevation change – in short, it’s as close as you can get to the real thing without actually having to travel to Germany. Perfect for getting acquainted, then. A month out from my trip, I began my training regimen. Forza Motorsport 7 was the software of choice, and Logitech’s G920 wheel and pedals would provide a more realistic interface than the Xbox One’s standard-issue controller.

As for the car, sadly Forza doesn’t offer up the Suzuki Swift Sport in its catalogue of driveable cars. It does, however, feature the Renault Clio RS, another B-segment five-door hot hatch with turbo power and an entertaining chassis. The Clio has a stronger power-to-weight ratio, but beside that the two cars are fairly close in configuration and intent. To enhance realism, all assists except for ABS were switched off. And beside being close to the real-life car I’d eventually rent, the Clio also had another advantage: it’s slow compared to the bulk of cars you’ll find in a racing simulator. A race track is a lot easier to learn when you’re going at a low velocity, so jumping into something truly hot like a Porsche 911 GT3 or Nissan GT-R would be counter-productive.

Intially, there was no shortage of crashing. Though slow, the Clio RS can be a tail-happy thing with a sharp throttle lift or some trail braking, and there’s no shortage of corners at the Nurburgring that easily induce a tank-slapper. Managing entry speeds and learning which corners required more care than others is the first lesson, and one that takes at least a good dozen virtual laps.

Once that level of familiarity was attained, I could ratchet up the speed. Despite being a daunting track with barely any harm-reducing runoff or gravel traps, there’s more than a few places along the Nordschleife’s 22.8km length where you can apply full power for long periods of time and attain speeds north of 200km/h, even in an entry-level performance car like a Swift Sport or Clio RS.

Places like the stretch between Flugplatz and Schwedenkreuz, the downhill approach to Fuchsrohre and the steep ascent from Bergwerk corner nearly all the way to the Nordschleife’s famous Karussell banking.

The flowing corners between Karussell and its smaller counterpart, kleines Karussell, can also be smoothly linked together if you know the right line, but learning that line is a challenge given many of the approaches are blind. Thankfully, figuring out which way the track goes in a sim results in much less scuffed paint and bent metal than if you were to attempt the same in real life.

And the same goes for other Nurburgring danger spots, like the fast left-hander at Schwedenkreuz and sharp right-left-right that lurks at the end of a high-speed downhill/uphill section at Adenauer Forst. Did you look up some crash vids earlier? Odds are the higher-speed prangs you saw were recorded at one of those two corners. After roughly 40-50 laps on the Xbox, I figured I was ready for the real thing. Fast forward to Germany, and after an incident-free few orbits of the Nordschleife those feelings were validated and Rent4Ring’s Suzuki was returned back to their office intact.

And that’s a testament to the accuracy of modern racing games. That first lap around the ‘Ring felt natural, like I’d been to the circuit before. There were no surprises apart from the occasional M3 or Mercedes-AMG GT Ring Taxi thundering past from behind and a slightly damp surface from some drizzle. In fact I wasn’t worried at all about whether I’d take a turn wrong and understeer into a guardrail - I was more concerned about whether other traffic would hold me up.

And doing that practice with a proper wheel peripheral like the Logitech G920 was also invaluable – and in my opinion, should be mandatory if you want to do the same. Aside from having something more realistic interface than a tiny thumbstick and shoulder triggers to control the car with, introducing the critical technology of force feedback adds a tactile element to the learning experience.

You can actually feel how the front wheels react to certain kerbs and bumps, and that’s vital prep if you want to stay safe. As a first-timer at the ‘Ring, I was still slow. My so-called bridge-to-gantry time was around 10 minutes 18 seconds, which is nowhere near what I was achieving on the Xbox/Clio RS (8 minutes 50 for a full lap). The thing is though, there’s zero fear-factor involved in cutting virtual laps, whereas a certain amount of fear is a healthy thing around the actual circuit – at least if you want to avoid handing over a sizable sum of money to an insurance company and the German healthcare system.

Did I have fun though? Absolutely. Without practicing the track ahead of time I wouldn’t have had the confidence to push harder, andthe experience would have been more about learning the circuit rather than actually enjoying myself.

Considering the monumental cost of renting a track-prepped car at the Nordschliefe (I did three laps of the circuit at a total cost of AU$616), getting familiar enough with the track to actually drive hard means you’ll get more value from your spend while still remaining safe.

But as faithful as it is to the source material, games can’t convey the sheer scale and challenge of the Nurburgring. It’s something every avid driver should attempt at least once in their life… but only after they’ve done their homework in the virtual realm first.