The arrival of a new BMW M5 is always going to be one of the biggest stories of the motoring year.

Unlike many icons that benefit from constant evolution, the M5 has been happy to re-invent itself with each successive generation, its size and power growing as the cylinder count expanded from six to eight to 10 before the adoption of turbocharging.

The sixth-generation F90 M5 is no exception, the adoption of all-wheel drive heralding perhaps the biggest revolution in the model’s 33-year history. With power figures climbing beyond the useable limits of two driven wheels, the new M5 has followed the lead of its arch rival, the Mercedes-AMG E63 S, and introduced a switchable all-wheel drive system to effectively harness its 4.4-litre twin-turbo V8.

Maximum power remains 441kW, the same as the outgoing M5 Competition, however torque increases 70Nm to750Nm and the added traction of all-wheel drive slashes the 0-100km/h claim to just 3.4sec, conveniently identical to its AMG nemesis.

BMW’s new super sedan passes 200km/h in just 11.1sec on its way to a limited 250km/h top speed, which can be increased to 305km/h when the M Driver’s Package is optioned. M xDrive has four different modes related to the DSC setting chosen; with DSC on the all-wheel drive system is active but will only send drive to the front wheels when the rears can no longer cope, while choosing M Dynamic Mode for the DSC allows for more slip and a greater rear-wheel bias.

Finally, with DSC off the M5 can be driven in all-wheel or rear-wheel drive for when you feel like you have too much tread on your rear tyres. Despite being slightly larger in every dimension and the addition of all-wheel drive, at 1855kg the new M5 actually sheds 15kg compared to its predecessor courtesy of the new 5 Series’ platform and the use of lightweight materials such as aluminium for the bonnet and front guards and carbonfibre for the roof.

Inside the standard 5 Series interior is jazzed up with flashes of aluminium and carbon, bespoke seats and an M-specific head-up display. 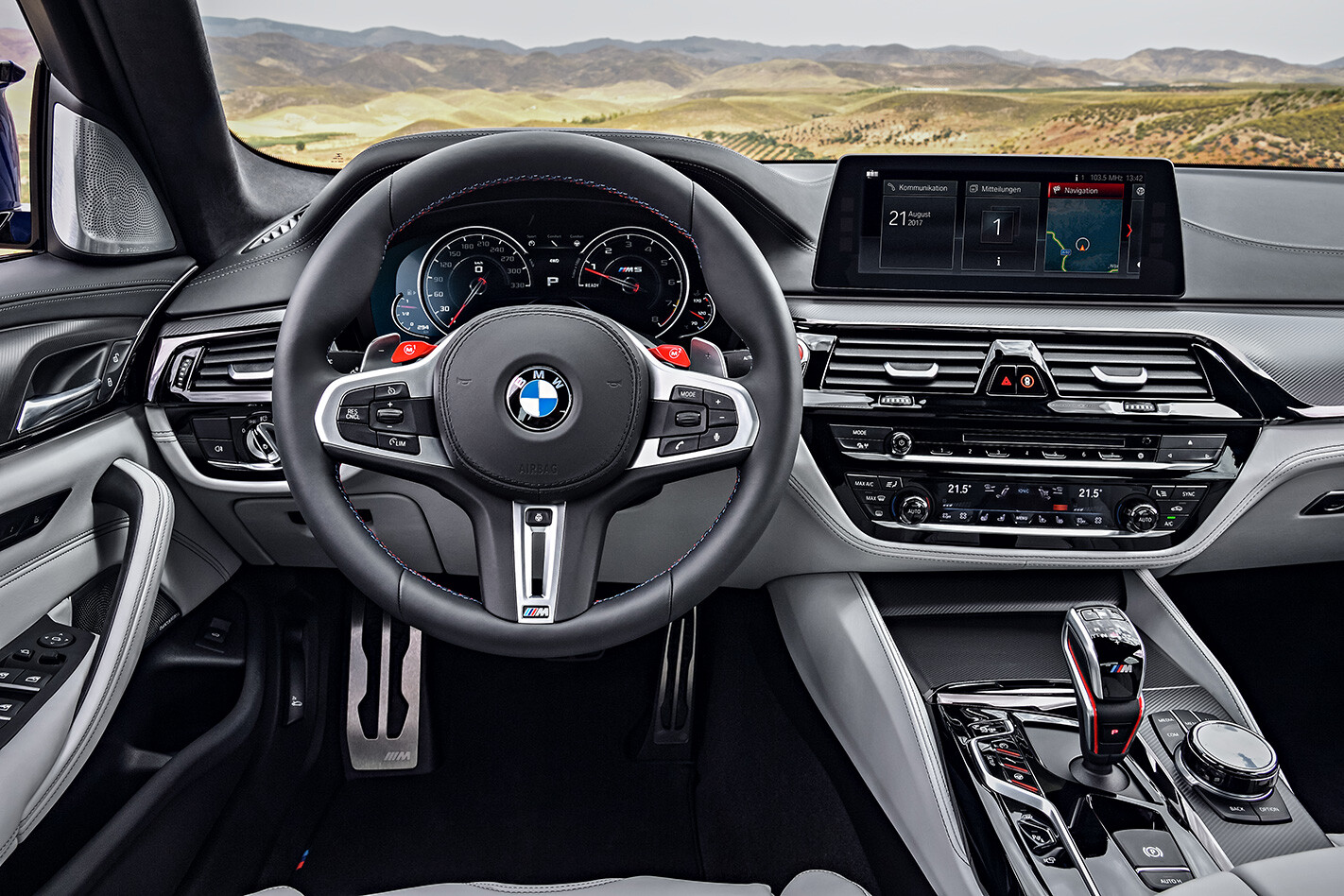 The M1 and M2 buttons, which allow drivers to save their favourite combination of settings for the all-wheel drive system, DSC, engine, transmission, steering, suspension and head-up display have been moved to the top of the spoke and painted bright red for easy identification.

Australian pricing is some way from being confirmed but we don’t expect it to stray too far from the current M5’s $230,900 when it arrives in the first quarter of 2018.

MOTOR will bring you a first drive of the F90 M5 from its international launch in late November.