KIA Australia will introduce a four-door sedan in 2017 aimed at chasing Holden and Ford sales when local automotive manufacturing comes to an end.

With a price tag expected to top $50,000, it will also be the company’s most expensive product to date, as reported by Wheels last month.

Codenamed ‘CK’, the sedan will be rear-wheel drive, like the VF Commodore and FGX Falcon, but will be slightly smaller than the locally-built sedans. The CK will use the same platform – and most likely  technology such as engines – as the forthcoming Genesis G70 sedan, which was unveiled at the 2016 New York Motor show as a direct rival for the 3 Series, Mercedes C-Class and Audi A4. In fact, Kia will beat Hyundai’s premium arm to the market, with the new sedan likely to reach Australian showrooms ahead of the G70’s arrival.

As the flagship, the CK will sit above the Kia Optima, which saw an all-new model introduced in late 2015, and will stretch beyond the most expensive Optima GT model, which starts at $43,990. That would push the price of the new sedan to $50,000 or more – unprecedented for a Kia sedan. Currently, the Kia Carnival Platinum CRDi carries the largest price-tag in the Korean maker’s range, at $60,990. 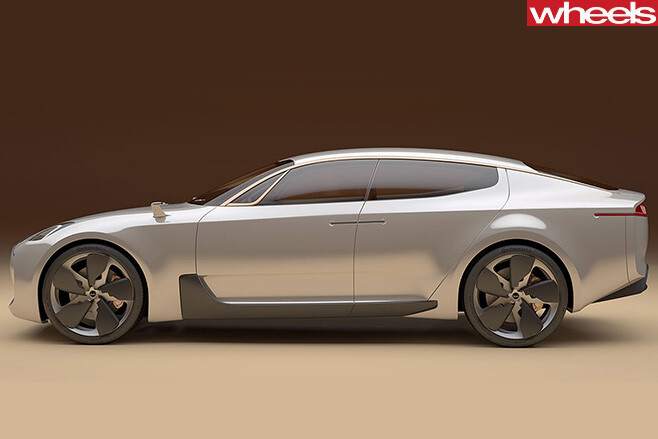 Despite new-car buyers generally perceiving SUVs and people movers – like the Carnival – as offering more metal for the money, Damien Meredith, the CEO of Kia Motors Australia, says that there is no badge snobbery towards the Kia. “Developing a vehicle like this will certainly give it that halo effect for our entire line-up, if and when it comes,” Meredith told Wheels, unwilling to confirm the car’s arrival here following media reports earlier this week. “We certainly need something like that.”

While the Genesis model will focus on luxury, the Kia version will be a more athletic model, he suggests. “For us in Australia, the best effect would be sports prestige,” he said.

Meredith also pointed to the CK’s arrival as potentially filling a niche left by the closure of the Holden and Ford factories, which will draw the curtain on rear-wheel drive, six-cylinder sedans built Down Under. While the Ford Falcon name won’t continue, the next Holden Commodore will be fully-imported and likely front-wheel drive for the first time.

That makes the CK, as a rear-wheel drive offering, a potential alternative for larger car buyers, suggests Meredith. “From a timing point of view, if the car does come as it’s supposed to come in that latter part of [2017], that works in with the unfortunate closure of local manufacturing. So it gives us opportunity in that regard.”

Meredith was careful to emphasise that there is no joy in the local operations of Holden, Ford and Toyota closing. “It’s a shame that manufacturing is closing,” he stressed. “It’s just good fortune for us if it [the CK Sedan] does arrive at that time.”