DUAL-CAB utes loom as the next battlefield in performance vehicles as manufacturers capitalise on increased demand for something above the load-lugger norm.

Already, local sales of upmarket utes such as the Ford Ranger Wildtrak, Toyota Hilux SR5 and Volkswagen Amarok Ultimate account for 40 percent of a market segment that now snares almost one in six sales. Buyers are clearly hungry for more sporting, visually aggressive pick-ups, especially with the imminent demise of the Falcon and Commodore-based utes.

The prospect of paying $60K for a dressed-up work ute hasn’t frightened buyers, and carmakers are keen to cater with more visual fruit and – in some cases – upgraded performance.

Leading the hi-po ute onslaught will be HSV, a brand best known for 400kW-plus Commodores.

“We have an interest in this area, and have been watching the segment develop in recent years,” HSV boss Tim Jackson told Wheels.

Jackson said any Holden Colorado-based ute would need to live up to the HSV promise: “The primary caveat on any program from HSV is the execution we pursue would need to meet the expectations of the brand: performance, bold styling and a strong technology story.” 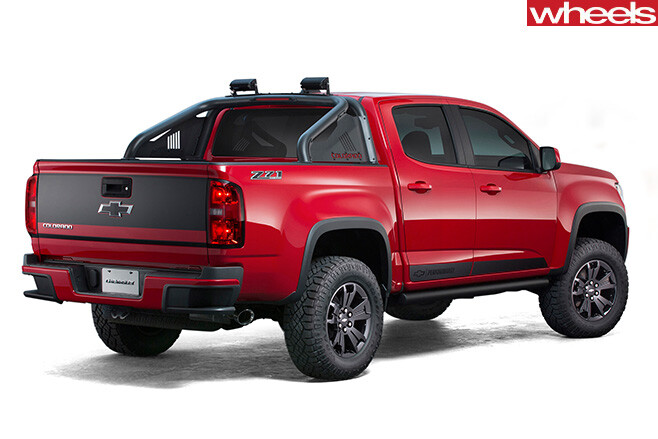 Key to HSV’s performance discussions are whether to fettle the 2.8-litre four-cylinder turbo-diesel fitted to Australian Colorados or use the Commodore 3.6-litre V6 that is used in the Chevrolet version in the US.

“The execution also has to meet the on-road and off-road needs of the customer. Therefore the versatility of the powertrain and chassis become real focal points,” Jackson said, hinting that the thirstier petrol engine may be best for HSV buyers.

“At some point you need to decide on which attributes your vehicle will compete with most strongly, and be comfortable you will deliver better than the competition,” he said.

Ford also has big hopes for Ranger. It has trademarked ‘Ranger Raptor’ (pictured top) in readiness for the flagship ute. As with the F150 Raptor sold in the US, the Ranger version will get power upgrades and extensive bodywork changes – at a price. Expect to pay upwards of $80K.

Raptor details are scant. It’s not known whether Ford will use the 3.2-litre five-cylinder diesel or one of the latest petrols, such as the 242kW 2.7-litre turbo in the F150.

It’s also likely to be a product of the all-new Ranger, due about 2019. 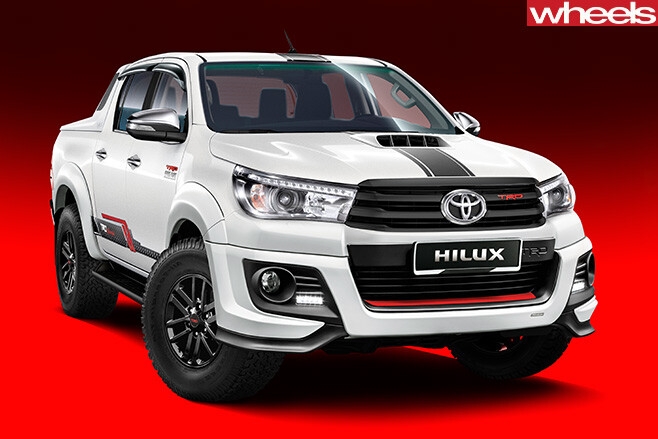 Industry leader Toyota is also planning to bolster its Hilux range. The SR5 model that currently tops the range is in hot demand and execs have all but confirmed another model is in development.

“There’s clearly scope for something like that,” said Toyota sales and marketing chief Tony Cramb, adding it would focus on styling and likely use the standard 2.8-litre four-cylinder diesel.

Hilux chief engineer Masahiko Maeda is cautious about higher outputs: “If customers require such kind of high performance with high-price vehicles, we will start to study, but based on my experience with the previous-generation Hilux, I don’t think so.”

Cramb noted that “TRD has a good name here in Australia” and could be used “if we were to do something like that”. However, Toyota insiders tell us a Hilux TRD (pictured above) is unlikely before 2018.

Holden is keen to expand Colorado when the update arrives in August and is working on a new flagship likely to reuse the Z71 moniker applied to a limited-edition model last year. “It’s a growing segment of the market and models like our Z71 proved popular, so there’s certainly an appetite for those kinds of vehicles,” said Holden spokesman Sean Poppitt. 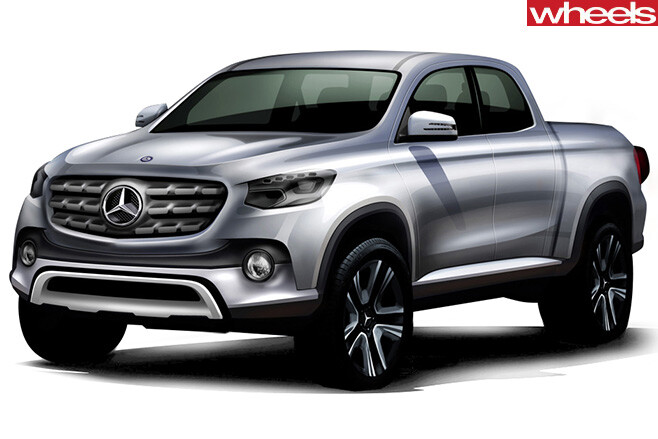 Then there is Mercedes-Benz’s upcoming ute (pictured above), which has Australia front and centre in the planning.

Due in 2018, Merc will offer four-cylinder versions of the Nissan Navara-based Mercedes-Benz GLT as well as a V6 diesel with outputs of around 200kW and 600Nm, making it one of the most potent utes available.

Benz is also considering an AMG version, though not a V8. AMG boss Tobias Moers told Wheels the brand was exploring the potential for an AMG ute, but that it wouldn’t be “the full Monty”.

“Is there going to be an AMG-line, which will have unique bumpers and wheels? Maybe,” said Moers. “But there’ll be no 4.0-litre twin-turbo V8 model, so it won’t be a proper AMG car.” 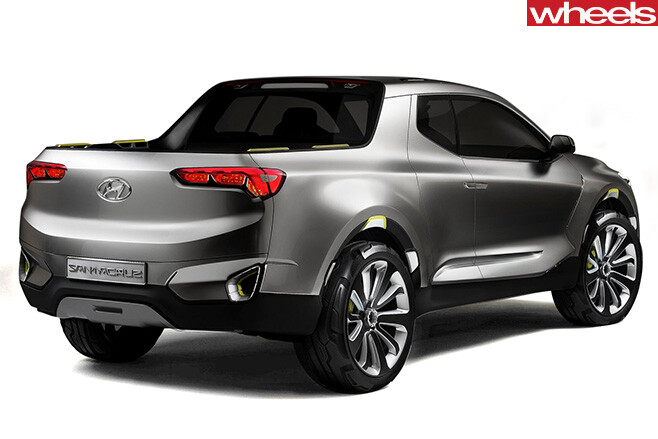 A performance ute wildcard could come from Hyundai with the production version of the Santa Cruz. While right-hand-drive production is unlikely before 2020, the car-based chassis makes it the closest thing to Falcon and Commodore utes dynamically. An N version from Hyundai’s newly formed performance division would certainly work in the US market for which the ute is primarily designed. 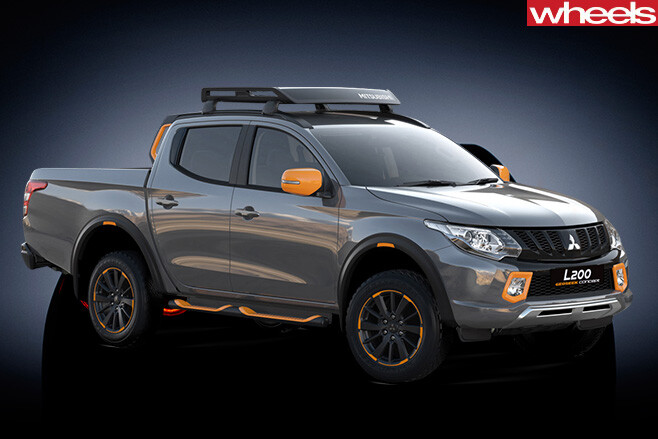 Not wanting to miss out on the boom at the top of the ute market, Mitsubishi showed its hand for a flagship Triton with the Geoseek concept at the Geneva motor show in early March. It featured splashes of orange, a black grille, black wheelarch extensions, stylised silver underbody protection, LED fog lights and roof racks. Mitsubishi Australia says the Geoseek is only a design concept for now and that the brand will monitor feedback. 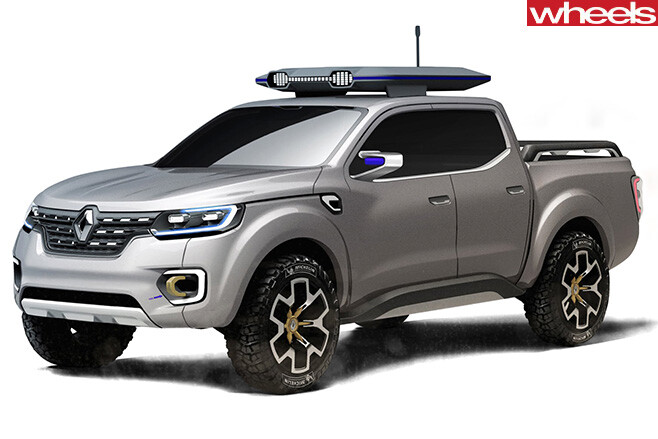 Renault looms as a wildcard in the performance ute race. The Alaskan concept revealed last year in Paris showed a clear desire to explore the sportier side of the ute segment. With 21-inch wheels and bold design features previewing an Alaskan production car to be unveiled this year, the French brand looks set to shake up a segment once reserved for workhorses. Whether there will be a Renault Sport version is too early to say, although executives are keeping an eye on the growth of the market, saying “it is not out of the question”.

Sales figures* reveal that four utes made the Australian top 10 list in January. Sales of 4x2 and 4x4 utes accounted for 15.1 percent of the market.