TODAY is an important day for Peugeot/Citroen and its spin-off DS brand in Australia. It’s the first day for new managing director Kai Bruesewitz.

German-born Bruesewitz arrives at a time when the French brands are undergoing a renaissance of sorts, with Paris-based PSA posting a second annual profit in 2015 after losing €1.04 billion ($A1.54 billion) in 2013. Its success is on the back of a host of new, highly competitive products such as the Peugeot 308, which won 2014 European Car of the Year and was a Wheels COTY 2014 finalist – with more promising vehicles on the way.

Bruesewitz, who moved to Australia from Germany four years ago and has worked for BMW and Mini, says PSA is on the dawn of a new era. “I think both brands, Citroen and Peugeot, have huge potential. Peugeot was roughly at double the volume 10 years ago, then probably lost a bit of mojo,” he said, speaking to Wheels at the launch of the 2016 Citroen Cactus.

“Now we are in the process of getting the mojo back for Peugeot and for Citroen, with the right products – which we have to some extent – but I think there is additional great product coming to get back to where both brands belong.” 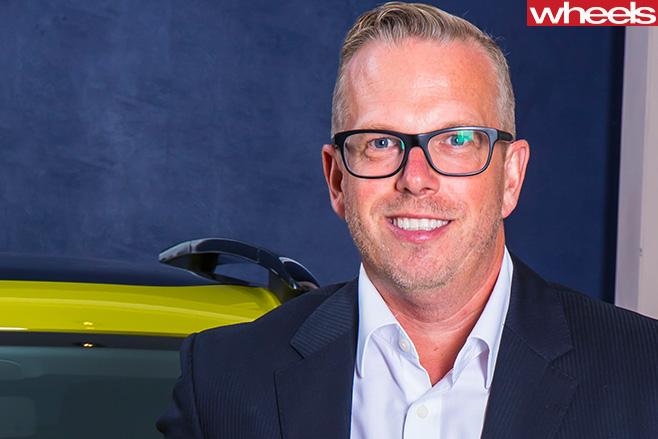 While Bruesewitz wasn’t willing to talk about upcoming products, such as the all-new Volkswagen Golf-rivalling Citroen C3 rumoured for the Paris show later this year, he is pleased with the stronger ties between Sime Darby, the importer of PSA brands to Australia, and Paris HQ. Yet he says that there’s no need for a paradigm shift under his leadership.

“A revolution? That would be arrogant and disrespectful of all the hard work that has been done,” he said. “However, there may not have always been an awareness of the competitiveness and challenges of the Australian market with the manufacturer being in Europe.

“And we all know that Australia is one of, if not the most competitive market. There needs to be the right support and the right backing, and also the right product offering in order to be successful.”

The support has come under global chief executive, ex-Renault-Nissan Carlos Tavares, who defected to PSA in 2014 and has helped the company get back into the black.

“France understands the conditions of this market – there is a new joint collaboration on which we’re building as the importer of all three brands [Peugeot, Citroen and DS] here in Australia,” said Bruesewitz. “And the manufacturer, PSA, is then of course expecting the respective results,” he said.

The 2015 sales results for PSA’s brands in Australia were hardly stellar. Peugeot’s 4000 sales were down on 2014’s 4394, while Citroen sold a mere 1106, falling from 1307. Making matters worse is that Renault set an Australian sales record of 11,525 cars to post a 15.1 percent increase, easily outperforming the market.

Can we directly compare Renault to its French rival? Bruesewitz says not yet. “We’re coming from different bases … Renault probably four or five years ago, they were in the same situation as we are now.”

In 2010, Renault sold only 1907 cars against Peugeot’s 5649, making its current success even more impressive. “They’ve put the right measures in place to get where they are now, and they’ve done a tremendous job. I think it’s fair to say that if we can replicate that journey, then we would be very happy.”

PSA will announce its long-term global strategy on April 5.