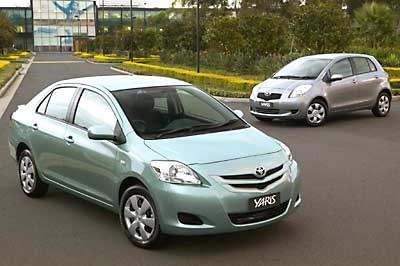 Toyota Australia has confirmed that it's recalling more than 45,000 Yaris sedans and hatchbacks to rectify a potentially dangerous seat belt pretensioner glitch.

More than 45,000 Australian Toyota Yaris owners are involved in an international recall of the model announced in Japan.

Toyota Australia says 45,360 cars here are involved in the recall. It says that number represents Yaris hatchbacks and sedans sold here between the October, 2005 local launch of the car and early April, 2007 - not April, 2008, as reported elsewhere.

A Toyota Australia spokesman said today the recall was precautionary. He said it involved replacing a sound insulating pad which is part of the seat belt pre-tensioning system. The pad could catch alight in a heavy frontal crash, he said.

Toyota US spokesman Brian R. Lyons told the Associated Press that in such a crash, the gas expelled by the pre-tensioner could cause the foam pad to ignite, leading to a fire.

Toyota Australia said Yaris owners affected by the recall would be notified by mail to take their car to their Toyota dealer, where the pads would be replaced free of charge. The job would take about an hour, he said.