THE first batch of the new 2016 Jaguar XF to land in Australia will be missing the brand’s latest infotainment tech and engines.

But the British maker says it is confident their absence won’t lead buyers to postpone purchasing the second-generation XF until the new features arrive.

The new XF will have a new 10.2-inch touchscreen, labelled InControl Touch Pro – but only in cars built from December this year.

That means that the first batch of cars to arrive in Australia will make do with the smaller 8.0-inch screen and its lower-spec InControl Touch infotainment system, with buyers left with no option to upgrade. 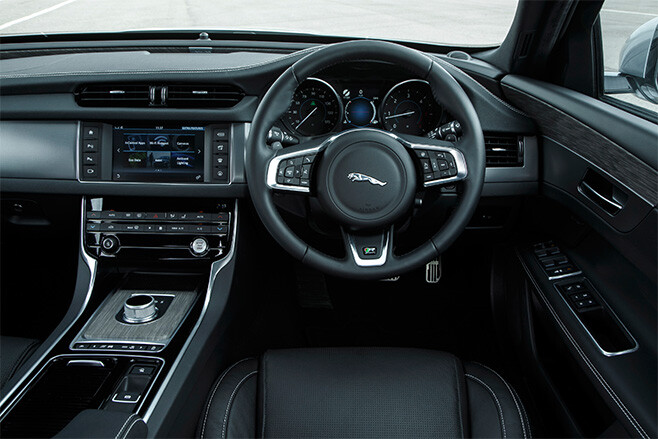 InControl Touch Pro enables features including sat-nav display in the XF’s new digital instrument cluster, as well as remote unlocking and pre-conditioning of the new sedan via smartphone.

The better equipped XFs will arrive from the second quarter of 2016.

“What we want to do is make sure that we finesse the system and calibrate it to the right level,” says Peter Virk, Jaguar’s head of development of the InTouch systems.

“Obviously we’ve announced the next generation system on the MY16 XJ [due here mid 2016], and this is an update of that, because the InTouch Pro in the XJ is an eight-inch screen.”

When asked why the Pro version was not readily available for the new-generation XF, Virk said there had been no delay.

“No [it’s not late], it’s the plan – to have a staged roll-out. What we want to do is get our technology out as quick as we can, but we have to refine it.” Similarly, the head of powertrain on the XF, John Pepperell, said that the new petrol Ingenium engines, which are yet to be officially given a launch date, were not overdue.

“We have carried over the 2.0-litre petrol and the supercharged AJ126 six, but we don’t consider them as old engines, as they’re still very relevant state-of-the-art modern petrol engines,” he said.

“For us as a company, it was a priority to replace the 2.2-litre diesel, the DW12 diesel. It’s served us well, it was a good workhorse, but I think workhorse is probably the word for it. So that was the priority to get the diesel in there first, and there is a petrol engine in the pipeline.”

Jaguar Australia said buyers would not hold back for the new infotainment or the new petrol engines.

“The XF is such a big step up from the existing XF,” he said. “And our dealers are going to have a lot more traffic thanks to the XE and this car.”