Motorsport wrap: Price sees V8 Supercars in future; Busch makes it two in a row at Texas; Marquez again the master at Austin

Price has jumped into a Stadium Super Truck since winning the motorcycle class of the 2016 Dakar Rally in January, and has thoughts of racing in the V8 Supercars category locally in the future. 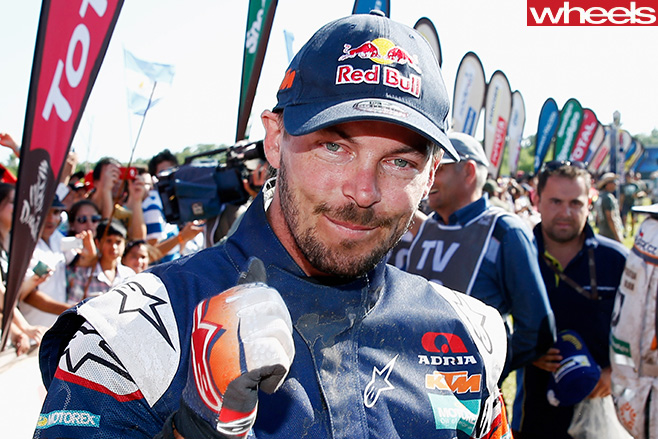 “I’d love that, for sure,” he told Wheels’ sister mag, Auto Action. “And, actually, it sounds like Red Bull, who’ve really jumped on board and supported me pretty hard the last few years, might just get us into a V8 to have a try and see what it’s like.”

In fact Price has already had a taste of V8s action, having lapped as a passenger at the Clipsal 500 weekend with Triple Eight star Shane van Gisbergen.

“When I went with Giz, he was letting me rip the gears down the main straight. It was really cool to see what these cars can do and I would love to try one for myself,” he said. 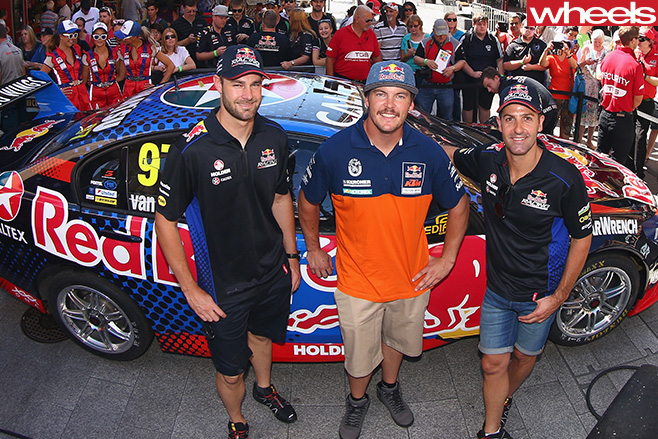 If Price does get his chance to pilot a V8 Supercar, they will have to figure out a way to get his massive cojones into the car.

They might have plenty of time. Price also told Auto Action he was hoping to switch to Dakar cars after another few years on bikes.

NASCAR: Rowdy makes it two in a row in Texas 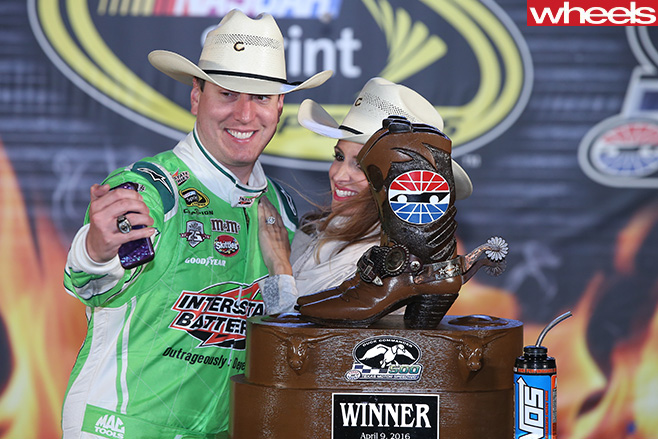 For the second week in a row ‘Rowdy’ clean-swept the weekend’s racing in NASCAR, this time taking the honours at Texas Motors Speedway.

A critical pit stop call by crew chief Adam Stevens was vital for Busch to secure his 36th career Sprint Cup victory, on a night when he had neither the fastest car nor the most laps led.

Fan-favourite Dale Earnhardt Jr followed Busch across the line with a nearly four second deficit to the victor to claim second.

The start of the event was delayed by rain, meaning the final laps of racing happened well after midnight local time.

With just 40-laps remaining, 13 cars were forced to retire when a multi-car wreck was started by Austin Dillon.

The carnage was unusual for Texas Motor Speedway’s 1.5-mile layout.

The Good ‘Ol Boys are back at it again next weekend at Bristol. 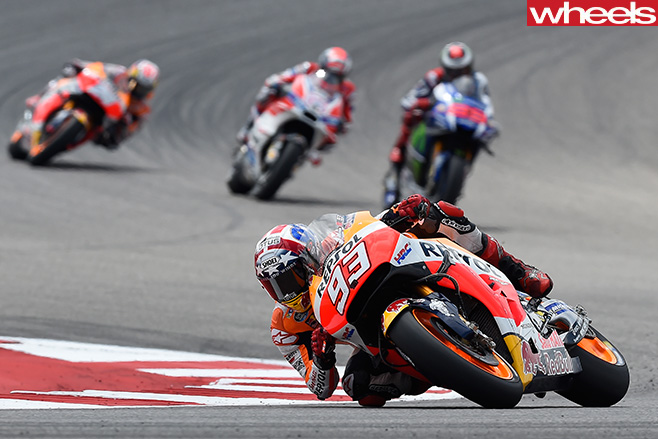 YOU DON’T mess with Marc Marquez on American Soil. That is the takeaway lesson from the MotoGP Grand Prix of the Americas at the spectacular Austin track.

The diminutive Spaniard dominated the weekend’s running, topping practice and qualifying, before controlling what was a rather bland race (spare some crashes) from the front of the field.

The dominant victory continues the 23-year-old’s feat of being undefeated on American soil while astride MotoGP machinery.

Best of the rest was Jorge Lorenzo, who could barely manage to keep his countryman in sight during the race. 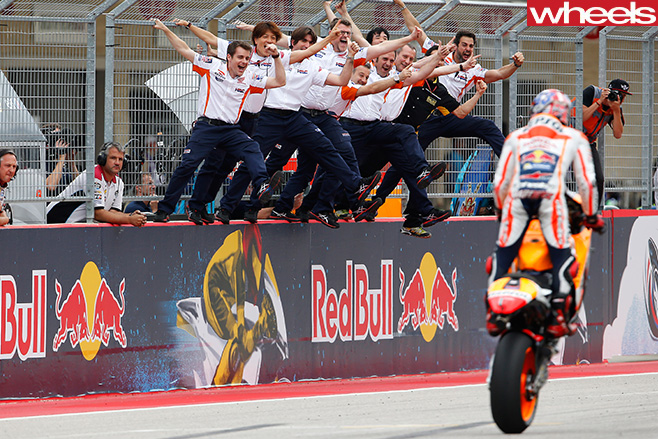 Several key players crashed out of the running while performing well early in the event. First it was nine-time world champion Valentino Rossi, who threw his M1 Yamaha into the gravel at turn 2 just three laps in.

At that stage it was Andrea Dovizioso and Dani Pedrosa who shadowed the leading pair of Marquez and Lorenzo. With the two title protagonists skipping away, Pedrosa attempted to make sure it was an all-Spanish podium.

With a significant straight-line disadvantage to the romping Ducati, Pedrosa’s only hope was a late braking move. And late Pedrosa did brake, but his Honda bucked wildly, and he was sent careening into Dovizioso, who was taken out of his second grand prix in a row from no fault of his own. 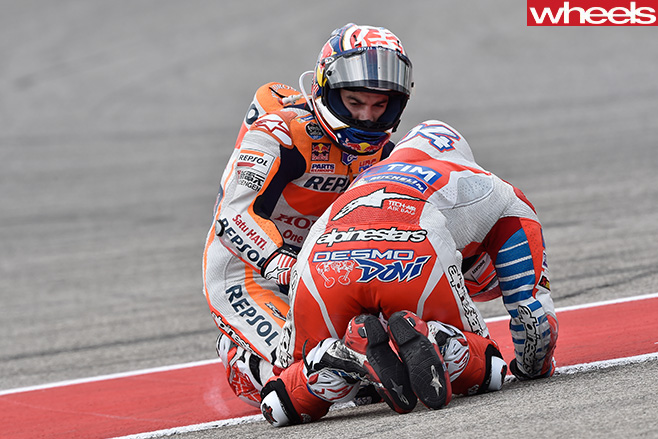 To his credit, Pedrosa rushed to the Italian’s side to check he was okay, and later visited his pit garage to apologise in person. Proper sportsmanship.

This left Andrea Iannone to inherit the final podium position, which he claimed unchallenged.

The Suzuki pair of Maverick Vinales and Aleix Espargaro finished fourth and fifth, after one of the few proper stoushes of the race. It is the first time two Suzukis have finished in the top five of a MotoGP race since 2007.

Australian Jack Miller was absent from the race after injuring his foot in a spectacular practice crash. Miller was saved from further injuring himself in the rapid high-side thanks to the deployment of airbags in his leathers.

The two-wheeled circus heads to Jerez, Spain to race in front of one of the craziest crowds of the year on April 22-24. 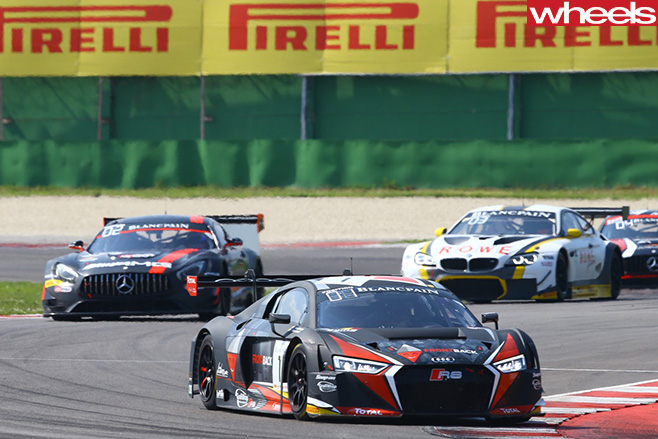 AUDI GT3 gun Laurens Vanthoor has notched another victory for the German manufacturer.

Racing alongside Frederic Vervisch, the pair drove faultlessly to give the new Audi R8 LMS its first ever Blancpain Sprint Series victory.

The duo was made to work for the win, with rain showers hitting the Misano track on Saturday and hampering their qualifying efforts, forcing them to race to the front.

The Belgian Audi Club Team WRT drivers held an advantage of just over a second by race end, with the HTP Motorsport Mercedes AMG GT3 of Maxi Buhk and Dominik Baumann second.

REIGNING SuperGT champions Tsugio Matsuda and Ronnie Quintarelli started their title defence in the best way possible, winning the opening round of the year.

The pair piloted their Nissan GT-R GT500 car in such a dominant fashion; they were able to turn a nine-second lead by the end of the pitstop cycle to more than 15 seconds by race end at the . Okayama International Circuit southwest of Tokyo.

Ryo Hirakawa in a Lexus RC F held off a hard charging GT500 rookie Katsumasa Chiyo in the final 10 laps to claim second.

Aussie fans will know Chiyo as the little bloke who puts V8 Supercars drivers to shame at Mount Panorama in the Bathurst 12 Hour. 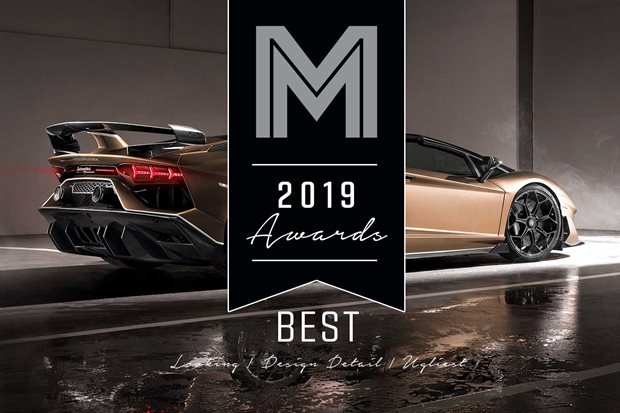