Nissan massages its wondrous GT-R with newfound comfort and refinement that do nothing to diminish its amazing performance. But has age wearied the Japanese supercar warrior?

Nissan massages its wondrous GT-R with newfound comfort and refinement that do nothing to diminish its amazing performance. But has age wearied the Japanese supercar warrior?

WHAT IS IT
With a sub-3.0sec 0-100km/h sprint time, the eight-year-old V35 GT-R is a Porsche 911 Turbo-troubling upstart from Japan, offering a 3.8-litre twin-turbo V6, all-wheel drive, and genuine room, comfort and refinement.

WHY WE'RE TESTING IT
Over the past eight years or so, many observers have reckoned that better ride comfort and refinement would boost the Nissan GT-R’s appeal, particularly as it already has the sort of performance to embarrass Lamborghini – never mind Porsche. Now their prayers seem to have been answered, thanks to a series of suspension and other mechanical upgrades that promise to put the grand touring back into the Nissan GT-R. 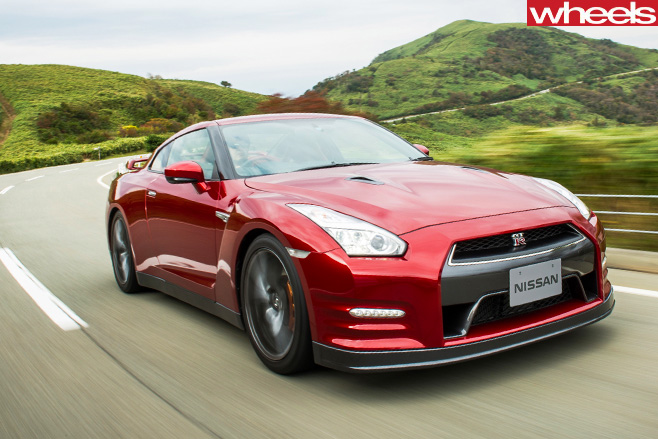 THE WHEELS VERDICT
Nissan has successfully evolved the already incredible GT-R into a more rounded and appealing everyday proposition, thanks in no small part to a series of suspension and other mechanical upgrades that take the hard edge off the V35’s ride quality. Throw in explosive performance, a quieter and more refined cabin, and sublime handling, and Japan’s only supercar (for now) remains a unique and relatively bargain-priced alternative to machinery from BMW, Porsche and even Ferrari and Lamborghini.

THE WHEELS REVIEW
IN AN era of instant refresh, there is something reassuring about a car that’s allowed to breathe with age. Nissan’s V35 GT-R is now a sprightly eight years old and Japan’s sole supercar continues to defiantly march to the soaring sounds of its own twin-turbo V6 baritone. 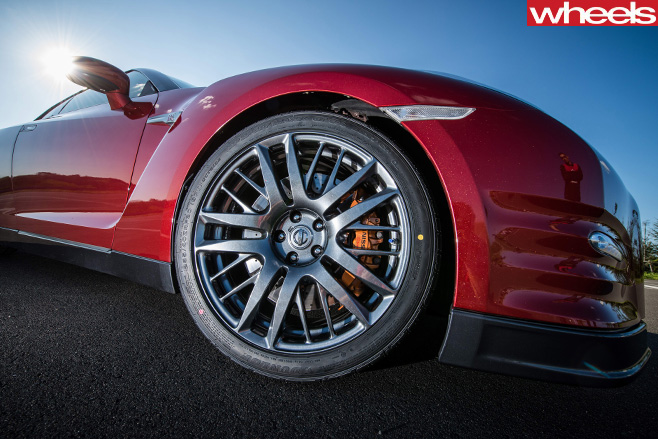 Building on last year’s facelift (brilliantly luminescent LEDs, swishier cabin materials, and retuned suspension, steering and brakes), further fettling of the dampers and tyres have substantially improved the ride without affecting the supernatural handling. Whether in Comfort or Normal modes, a newfound smoothness is immediately evident. The bobbing and crashing over bumps now only happens in Race mode.

Additionally, the brakes are now more progressive, the tactile steering no longer vibrates at idle, more noise insulation abounds, and the infamous transaxle and driveshaft shunting is cut, though not eliminated.

However, the console knobs are Navara-grade, the column-mounted (rather than wheel-mounted) paddle shifters are awkward to use when arms are twirling through tight turns, the speedo is out, the cruise control sucks and the tinny Bluetooth is infuriatingly low-fi. 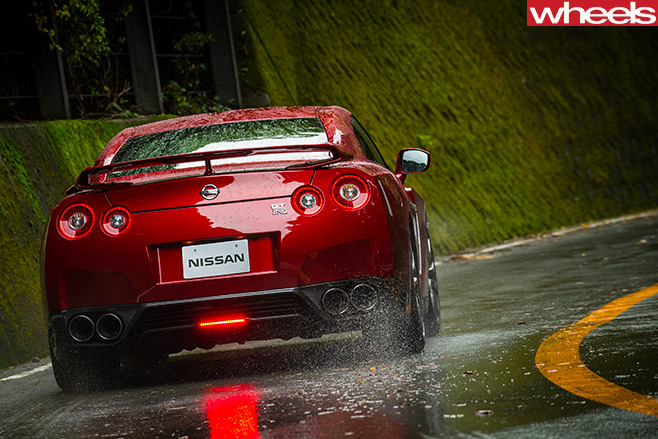 The Japanese ambience is an intrinsic part of GT-R folklore, but the initially daunting PlayStation-inspired central screen and its slew of driver function readouts (the brake pedal pressure gauge is a favourite) speak of the supercar’s colossal performance.

The GT-R glides through corners with grin-inducing glee, accompanied by enormous grip, but be prepared for relentless coarse-chip bitumen drone.

Incredibly, our 13.1L/100km average over some 1000km at the wheel matched the trip computer’s result exactly.

The MY15 V35 is a more liveable supercar, its evolved civility evoking something akin to a Porsche 928/911 Turbo lovechild. With 46 years of Skyline GT-R heritage behind it, age is mellowing Godzilla gracefully. 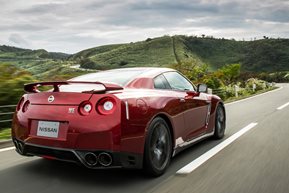