Sebastian Vettel has won his second Monaco Grand Prix in controversial circumstances with many believing that Kimi Raikkonen was robbed of victory by his Ferrari team’s pit stop strategy.

Though subtle in its execution, it was a strategy that ultimately helped Vettel maximise his world championship points lead over Mercedes’ Lewis Hamilton, who had a troubled weekend. Vettel’s advantage is now 25 points.

Raikkonen’s face and body language on the podium silently conveyed his bitter disappoint to the crowd and TV audience over the way the race unfolded after he led for the first half. Starting from pole, Raikkonen opened a comfortable gap over Vettel, Mercedes’ Valtteri Bottas, and the Red Bulls of Max Verstappen and Daniel Ricciardo.

Verstappen and Bottas were the first of the leading bunch to make their obligatory tyre stop. Then Ferrari called Raikkonen to the pits even though he enjoyed the sweet advantage of track position on a circuit where passing is awkward at best.

Crucially, this gave Vettel and Ricciardo five laps in clear air, the pair reeling off a succession of lightning-quick times.

Vettel was then pitted by Ferrari, rejoining just ahead of Raikkonen, who had been impeded by lapped cars, and the rejuvenated Ricciardo, now ahead of Bottas and Verstappen. 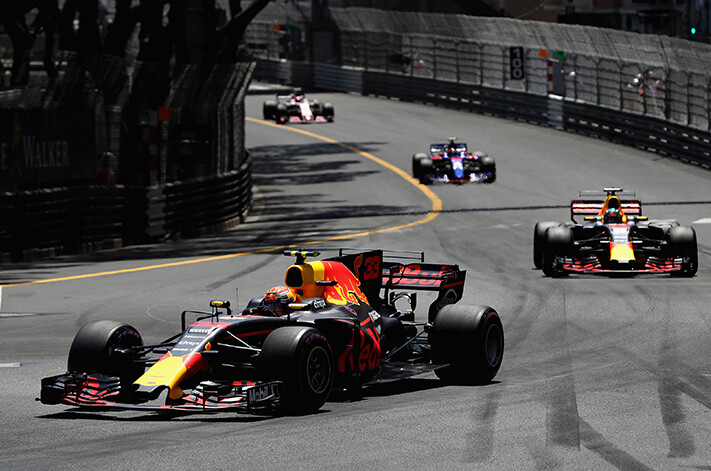 Never a great conversationalist, Raikkonen went all quiet on the radio as he digested the dramatic change in fortunes.  Verstappen, by contrast, lit up the airwaves with some blue language when he found himself behind his team-mate.

Further back, Hamilton was making some steady ground from his 13th starting spot, moving to sixth before making a pit stop, which dropped him to seventh.

Vettel looked out of reach, as the sting had left Raikkonen’s attack.  Lapping quickly enough, Ricciardo, in third, seemed safe from Bottas. It was measuring up as a quiet run to the finish.

Not quite.  Comeback driver Jenson Button’s McLaren got into the side of Sauber’s Pascal Wehrlein, tipping it on its side into a barrier and bringing out the safety car, and bunching the field.

The restart was nearly Ricciardo’s undoing, the Australian sliding wide in the first corner, clipping the steep barriers with his outside rear wheel but somehow surviving without losing a place to Bottas. Raikkonen’s displeasure at the outcome was in deep contrast  to Vettel’s unrestrained delight. “From the team point of view, there was no plan of any team orders or anything,” the German said. “When Kimi stopped I was just going flat out as fast as I could. I was surprised when I came out ahead. It worked well for me to stay out longer. We’re racing, we get on well but I can understand that Kimi’s not entirely happy today.”

Hamilton, who collected valuable points from seventh, was insistent that Ferrari is now putting its efforts behind Vettel.  “For the leading car it’s very hard for him to get jumped by the second car unless the team decide to favour the other car – so that is very clear.”

Ricciardo, an angry young man after qualifying fifth, was pleased with his drive.

“I’m much happier today. I can’t obviously complain how it worked out and I have to thank the team. It was cool to show some pace today and we had that clear track. I didn’t think the tyres had that much more but I just got into that rhythm, was able to punch out some good times. I knew the pace was right, my engineer was encouraging me on the radio saying: “Pace is really good. Keep going, keep going!” 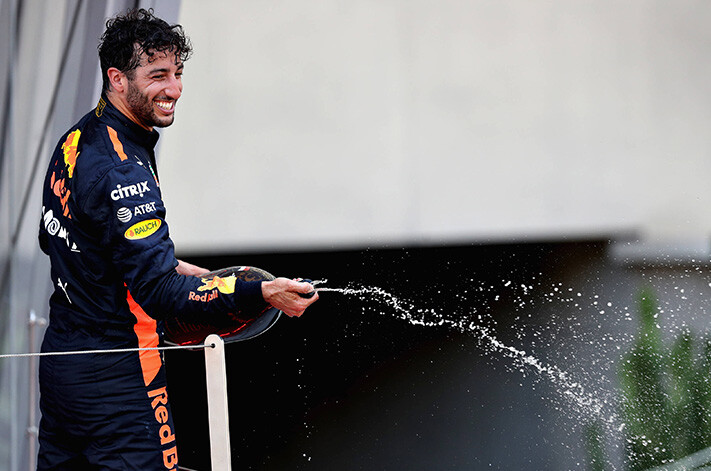 Qualifying for Monaco, especially in recent years, is always critical to the ultimate outcome, the majority of races being won from pole.

Not last year, or this year though.

On Saturday, Raikkonen turned aside nine years of qualifying nothingness, producing a corker of a lap which landed him his first pole since France in 2008.

He reacted with his usual unrestrained delight. A keen observer reported that Kimi ‘almost smiled’.

Ferrari blocked out the front row, with Vettel close but not quite quick enough, edging Bottas back to third.

Hamilton’s Mercedes, for some inexplicable reason, behaving evilly, failed to emerge from the second phase of qualifying, Q2, shattered that set up problems kept him from taking a good crack at the pointy end.

Ricciardo had looked quick through the prelims before a brake problem ended his final practice session.  Even so, the West Aussie was confident he could mount a serious attack on pole, until his team released him into traffic, compromising his very exact warm-up procedure which meant fifth quickest, behind Verstappen, was all he could manage.

With that, his grin evaporated and he gave his Red Bull team a thorough serve.

Twenty four hours later, the smile was back. Almost as big as Vettel’s.