Motorsport wrap: First ever win for a Kiwi in the WRC, Van Gisbergen wins at Monza and Rossi dominates – it’s your weekly motorsport wrap

YOUNG New Zealander Hayden Paddon has scored a brilliant maiden WRC victory in one of the roughest, toughest events on the calendar, driving what he called “the stage of my life’ to take the fairy tale win in Rally Argentina.

Paddon and co-driver John Kennard had to survive the swirling fog in the mountains, and gear change issues on the final day but ultimately took a stunning 14.3sec win in their Hyundai i20 from championship leader Sebastien Ogier (VW).

The two leaders were separated by just 2.6sec ahead of the final legendary El Condor speed test, but Paddon stunned the Frenchman to hurtle down the rock-strewn mountain almost 12sec faster and secure a remarkable win. 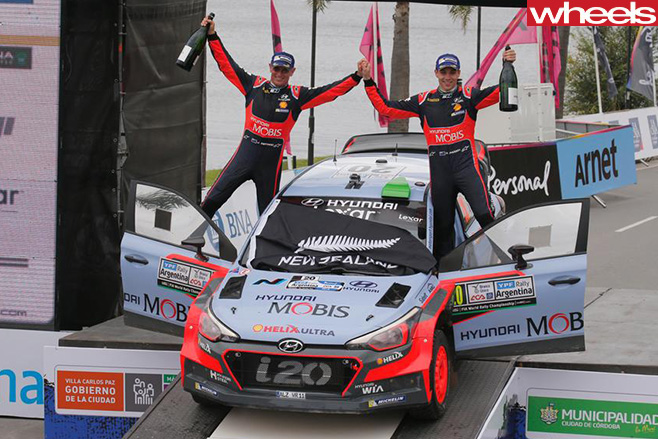 He became the first New Zealand driver to win a WRC round in the championship’s 43-year history and crushed Volkswagen’s ambitions of securing an unprecedented 13 consecutive victories.

“I can’t believe it, I really didn’t think I stood a chance before the last stage after losing time to Ogier this morning,” said Paddon, who celebrated his 29th birthday the day before the start. “I gave that last stage everything I had. Tight and twisty roads like El Condor aren’t my strength but I drove the stage of my life.”

The triumph was the third overall victory for the Korean manufacturer in the WRC, and first for the New Generation Hyundai i20.

Paddon was always in the picture in Argentina and took the lead on Saturday when VW’s Jari-Matti Latvala rolled out spectacularly, blaming a suspension breakage.

Seeking to become the first Kiwi to win a WRC round, Paddon started the last day of the tough event with a 29.8sec advantage over championship leader Sebastien Ogier. 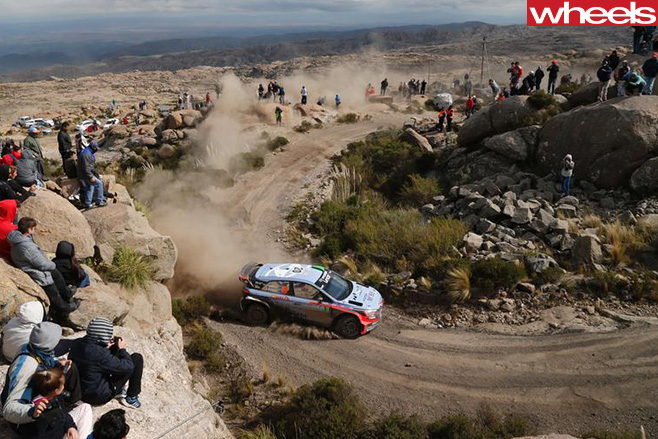 On Saturday evening, Ogier declared to anyone who would listen that he was aiming merely to consolidate second place in the rally.  Translation:  “I will try everything to beat this Kiwi upstart.”

After Ogier clawed back large slabs of time on the final morning, alarmingly reducing the deficit to a mere 2.6 seconds, Paddon went out on the final El Condor Power Stage thinking he couldn’t win.  "Sebastien had won that stage several times and so we expected he'd probably do it again. Two seconds wasn't going to be enough."

Meanwhile, Volkswagen has provided an insight into the faster, gruntier and more spectacular next generation of the Polo R WRC from 2017. Next year’s Polo R WRC will generate about 280kW or roughly 45kW more than the current car.

Lighter, wider, and with more aerodynamic freedom, the changes are set to be dramatic, visually and aurally, with hints of the legendary Group B cars of the 1980s. 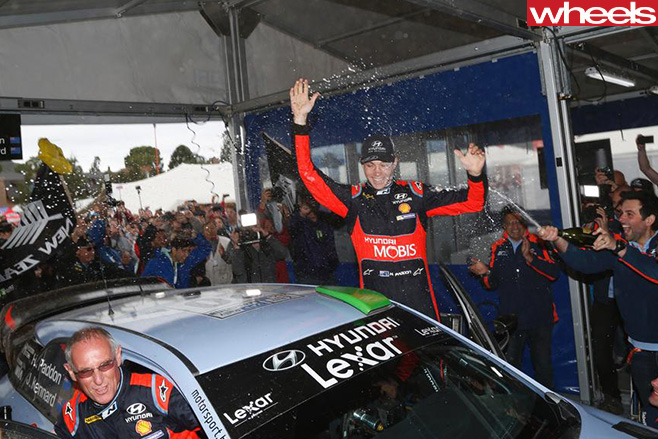 Development of the third generation of the Polo R WRC started back in mid-2015, when the International Automobile Federation (FIA) released the new regulations for the highest class of rallying in the world.

About 50 millimetres wider and 25 kilograms lighter, the most visually striking changes are the larger rear wing and broader front spoiler.

Away from the limelight, and with Chris Meeke at the wheel, VW’s arch rival Citroën Racing has already completed initial gravel road testing of the car that will chase the WRC from next season.

Under the bonnet, the 1.6-litre direct injection turbo engine is now fitted with a 36mm booster flange, like the Citroën C-Elysée WTCCs. The four-wheel drive system now comes with a central differential that improves traction. 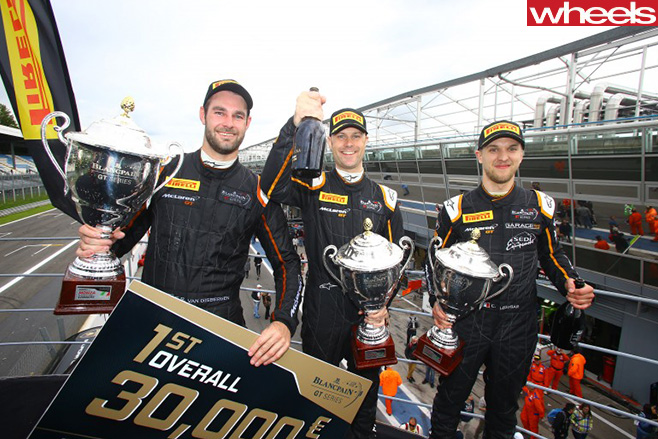 Shane van Gisbergen has come out on top after an epic fight with Maxi Buhk to decide the three-hour Monza round of the 2016 Blancpain GT Series – by a tight 0.3sec.

It was a compelling battle between van Gisbergen driving the Garage 59 McLaren and pole-man Buhk aboard the HTP Motorsport Mercedes-AMG.

With a massive entry of 57 GT3 cars, traffic played an important role in the outcome of the race, and with 30 minutes to run, SVG was badly baulked by a large group of cars fighting for top-15 positions.   Buhk immediately seized the change to make a lunge on the McLaren, poking his Mercedes under the rear wing of the leader 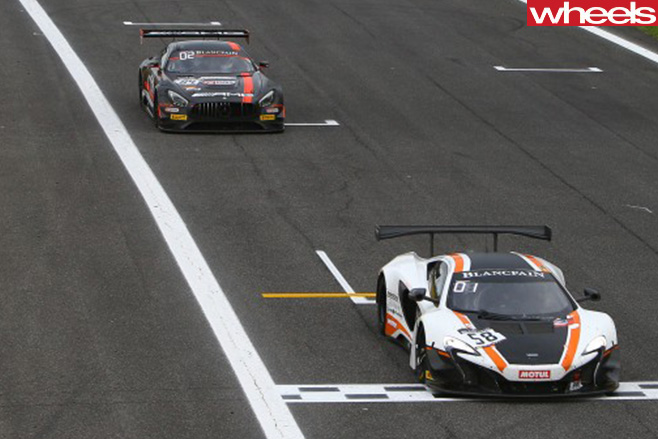 GT racing of the highest level followed, as the duelling pair fought for every inch of Italian tarmac, with Buhk getting alongside the McLaren on a couple of occasions.

But the Kiwi driver kept his cool and crossed the line first, to the joy of the recently-created Garage 59 team.

Behind the scrapping duo at the front, Bentley Boys Andy Soucek, Wolfgang Reip and Maxime Soulet produced a steady race to a podium finish. 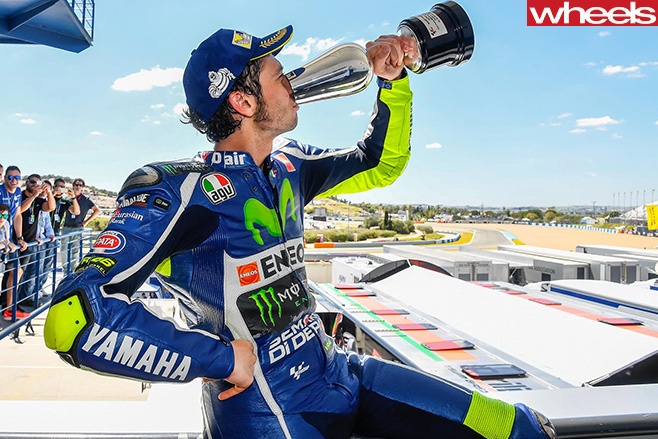 How sweet it must be, especially after the controversy that marred the world MotoGP championship last year, for Valentino Rossi to destroy arch rivals Jorge Lorenzo and Marc Marquez in front of 100,000  fans at Jerez.

Most had come to see the two local heroes fight for the win.

Instead, they were stunned as Rossi, now 37, banished his qualifying demons to take a superb pole position and then raced away to score a dominant win in the Spanish Grand prix.

Rossi clearly wasn’t distracted by the news in the days before that his Yamaha team-mate Lorenzo will be a Ducati rider in 2016 and 2017, and that Honda’s Marquez was also approached to switch to the Italian team. 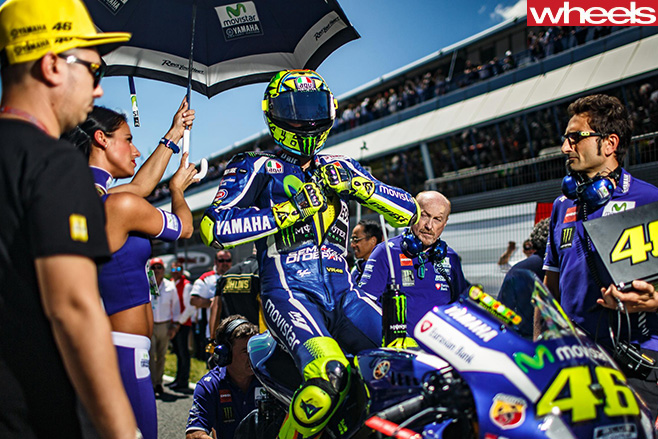 He made a great start to head Lorenzo into the first turn, preventing the reigning world champion from making his usual lightning run-away-and-hide caper.

Lorenzo briefly hit the front on lap two, but Rossi assertively reclaimed the front running and was thereafter never headed.

With clear track ahead and a handy margin behind him, Rossi put the hammer down and checked out.

The Italian lowered his pace a little in the final stages of the race to conserve his tyres, but finished his lonely ride by taking the chequered flag 2.386s ahead of Lorenzo with a handy gap back to championship leader Marquez.

It was Rossi’s 113th career victory. 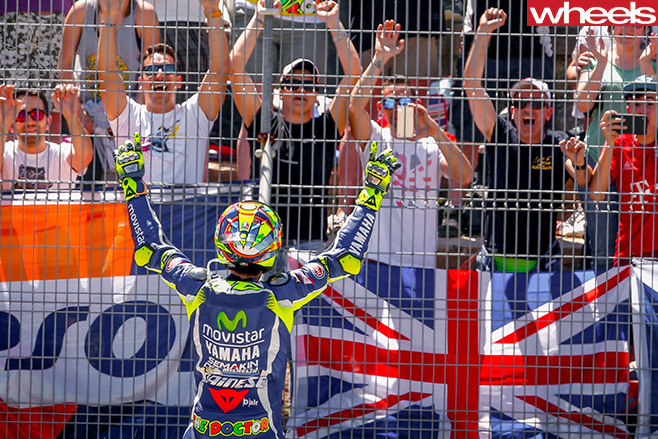 Australia’s Will Power has finished fourth in the Grand Prix of Alabama won by Frenchman Simon Pagenaud, who led most of the race and survived late contact with Graham Rahal.

Pagenaud’s win from pole on the permanent road course came on the back of winning the previous week in Long Beach, and extended his strong start to the season.

The Team Penske driver – Power’s team-mate - has now finished second, second, first and first to create a handy 48 point lead over Scott Dixon in the standings. 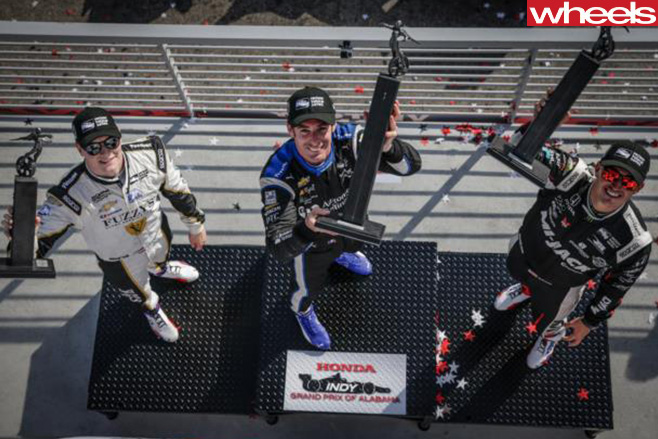 Dixon spun early in the Alabama race after a hit from another car, finishing 10th.

Controversially, the contact with Rahal with eight laps to run came when Pagenaud appeared to move to block Rahal, who made contact with the Frenchman's right rear.

Pagenaud, who also won last week at Long Beach, went into the grass before working his way back to the front.

Rahal recovered quickly to hold off fellow American Josef Newgarden to finish second while Power was fourth after a quiet start to 2016.

Simon Evans and Ben Searcy won the opening round of the 2016 Australian Rally Championship, the Quit Forest Rally, in Western Australia, but only after a massive scare courtesy of up-and-comer Harry Bates and his co-driver John McCarthy.

The four-time Australian rally champion Evans and challenger Bates each won a heat over the weekend, and finished the event with the same points.  But the bonus point awarded to Evans/Searcy for recording the most stage wins was enough to hand them the overall event victory.

Bates, the son of legend Neal drove his dad’s old Toyota S2000 machine on what was his first start in WA and only his fifth ARC start.

He starred on Saturday to take an impressive heat victory.  Aside from testing the previous Wednesday, the second-generation driver had never driven on the slippery ball-bearing roads for which the area is famous.

First on the stages, Evans had the unwelcome task of being the road ‘sweeper’ but he pushed Bates all the way to take second on Saturday.

“The young fellas (Bates/McCarthy) just caught us unawares,” Evans acknowledged after the Saturday competition. “We were pretty happy with our pace, sweeping the roads out the front, and I thought everything was pretty sweet and then someone said ‘Harry’s kicking your butt’ and I was like; damn it.”

The top two finishing results were reversed on Sunday.

Bates admitted to mixed feelings about the weekend, delighted to win on Saturday but disappointed he wasn’t a bit closer to Evans on Sunday.

Justin Dowel/Toni Feaver (Hyundai i20 proto) and Molly Taylor/Bill Hayes, in a near-standard Group N Subaru WRX STi, finished the event on equal points in the race for the final spot on the podium. The tie was broken by calculating the total competitive time for each crew across the entire event, with Dowel/Feaver getting the nod.

Seventy-year-old Ross Dunkerton turned back the clock to take sixth in heat one and ninth in heat two.

Neal Bates and Coral Taylor took top spot in the both heats of the Australian Classic Rally Challenge.