Holden could soon have an answer to the Car of the Year winning Mazda MX-5 and former winners the Toyota 86 and Subaru BRZ.

The Opel GT Concept has been billed as a vision for a future super-light coupe from Vauxhall and Opel.

Described as a “template for future sports cars” the GT Concept from General Motors’ European brands is thought to be barely bigger than the European GM Corsa supermini, and is targeted to weigh under 1000kg.

The Concept - which was built in Australia and photographed with the Melbourne skyline in the background - was built on a bespoke rear-drive platform and uses GM’s new, all-aluminium, 1.0-litre, three-cylinder turbocharged petrol engine. 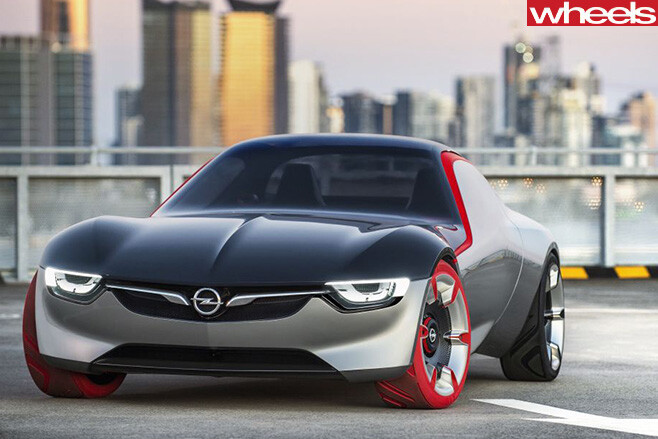 The motor is good for 107kW and 205Nm of torque. It drives the rear wheels through a six-speed sequential gearbox and, theoretically, could push the GT from zero to 100km/h in ‘under 8secs’ and on to a maximum of 216km/h.

The unusual styling is described by GM Europe design chief Mark Adams as purebred, pared down, yet unashamedly avant-garde.

“It is dramatic, sculptural and full of innovations, which is our great tradition that we intend to continue,” Adams said.

“In the mid-60s Vauxhall and Opel created their own interpretations of a light-weight sports car – the XVR and the Experimental GT – both of which were thoroughly modern with dynamic sculptural form.” 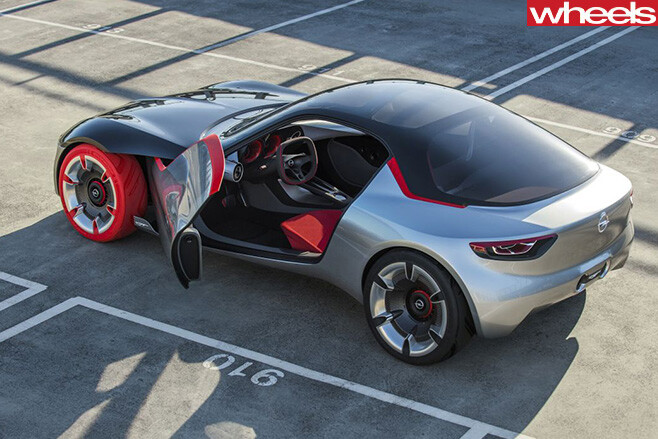 The GT Concept is also intended to pay homage to the 1966 Vauxhall XVR and the 1965 Opel Experimental GT, which GM Europe claims were the first true concept vehicles to appear from the design houses of a European manufacturer.

GM Europe has dug further into its back catalogue, saying that the GT’s “distinctive red tyres – mounted on rims with a ‘roller-skate’ design – are a reference to an iconic Opel motorbike from the 1920s – the Motoclub 500 – which sported red-coloured rubber.”

Beyond the official information, GM Europe sources say that while a bespoke rear-drive platform of the kind proposed here is highly unlikely to see production, this concept will be a serious intel-gathering exercise when it is unveiled to the public at the Geneva auto show in early March. 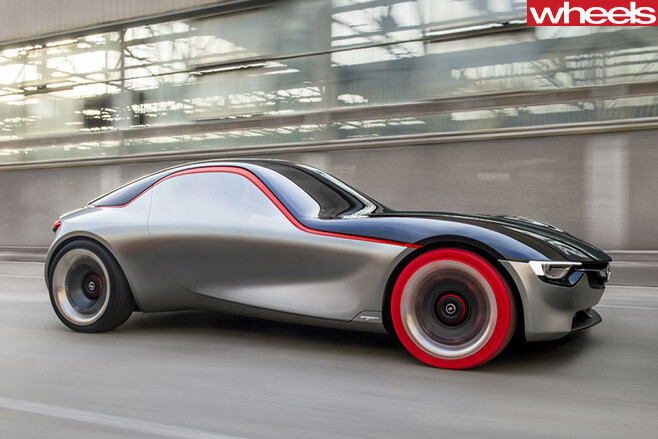 The insider said that the GT Concept was showing the company’s direction of travel.

“Like the new (European) Astra, this car continues with the theme of making a car that is no bigger than it needs to be. One that is pared-down, light and no more complex than necessary.

“People have seen this in reality with the new Astra, which was smaller and lighter than its predecessor. [GM Europe] is going to continue in this direction of travel with future models.” If you were laying a bet on the GT Concept, the most likely form of an eventual showroom appearance is as a highly distinctive, affordable, lightweight coupe based on the next-generation Corsa supermini family.

A Holden spokesman refused to discuss the origins of the one-off concept car.

However, as with other concept cars produced in Australia it had distinctive Melbourne buldings in the background of the handout media photography, a giveaway that the motor show star was likely produced locally.

However, it's understood the Opel GT was designed overseas.