PORSCHE says its new Mission E high performance electric car – shown as a concept at the 2015 Frankfurt motor show and expected on sale about 2018 - will be the fastest on the market.

It could also spawn a high performance electric family, including SUVs and a sports car.

Speaking shortly after the sleek four-door’s motor show reveal at the show, Porsche research and development chief Wolfgang Hatz said it was important to take the electric performance lead. “It will be the [highest performing] electric car,” said Hatz. “We will push the limits.”

The Mission E is powered by two “permanently-excited” electric motors claimed to produce more than 440kW and accelerate the sleek four-door to 100km/h in “under 3.5 seconds”.

“It will be less than 3.5 seconds, we didn’t say how much less,” said Hatz, refusing to give details.

He said the electric motors will use technology gleaned from the brand’s Le Mans-winning 919 hybrid race cars and that the engines would be developed in-house with a yet-to-be-announced external partner.

“Those e-motors we will use on the Mission E will also be strong in-house development together with a partner, which we cannot publish at the moment.” Hatz said the electric motors would give repeatable performance, rather than reducing their performance when under extended load, as can happen with the Tesla.

He also said the Mission E production car would bring new battery and charging technology – including an 800V electrical system similar to that in the 919 race car – that would allow more than 500km of driving and an 80 percent charge within 15 minutes.

Much of its futuristic technology – including OLED displays, gesture control, holograms – was being worked on for production.

Hatz also said the overall design would not stray wildly from the Mission E concept, in much the same way as the 918 Spyder remained faithful to its concept.

Porsche has also built flexibility into its Mission E concept, which is designed to expand – or contract. 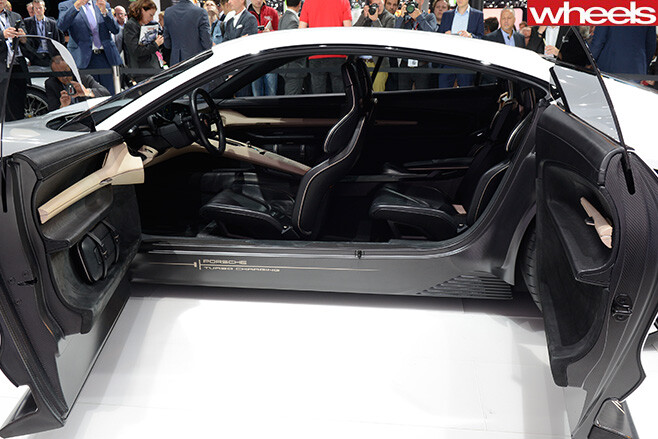 He admitted SUVs or smaller cars would all be possible, but that the focus now was developing the Mission E for production, something expected about 2018.

“First of all we work hard to make the first car a success,” he says of the bold move into electric performance cars, which many see as a way to tackle the success of American newcomer Tesla.

“We decided four-door, four-seater is the first project to start with, and then we see. The first one has to be ‘wow, this is a real Porsche’.”

Hatz would not be drawn on how much the Mission E would cost, but confirmed it would be a profitable project for the car maker known most for its iconic 911 sports car.

“We need a reasonable volume on such a project,” he says. “We cannot afford a project where we lose money.”