IT’S OFFICIAL. The era of the affordable Holden V8 is coming to an end and we had better get used to it.

The sizzling VFII Commodore V8 might be hot off the press, but once it reaches the end of its lifeline in two years time, hopes that maybe Chevrolet would develop another SS to fill the V8, rear-drive void have been dashed.

GM’s President of International Operations, Stefan Jacoby, confirmed at the Frankfurt Motor Show that the Chevrolet SS will die along with the Aussie Commodore in late-2017.

“The world is obviously changing and the eight-cylinder period is coming to an end, and the rear-wheel drive is just difficult to justify on a dedicated single vehicle architecture for Australia,” Jacoby said.

When questioned about what performance Holden fans should expect once the Commodore V8 was gone, Jacoby replied, “They will get exactly what they want, based on a different technology”.

In other words, there may be another relatively large Holden capable of 4.9sec to 100km/h, but it won’t be a V8 and it’s unlikely that it will be as affordable as the current $44K VFII Commodore SS.

“The brand cannot be the same any more because the brand will die. Over the last decade it has lost half of its market share,” Jacoby said.

He was alluding to the imminent introduction of Opel’s new-generation Astra to replace the Aussie-built Cruze in late-2016, followed by what many believe to be Opel’s larger, new-generation Insignia in 2017.

But at the same time, Jacoby unintentionally highlighted the failure of Holden’s existing, and previous, four-cylinder products to arrest the slide in large Commodore sales. 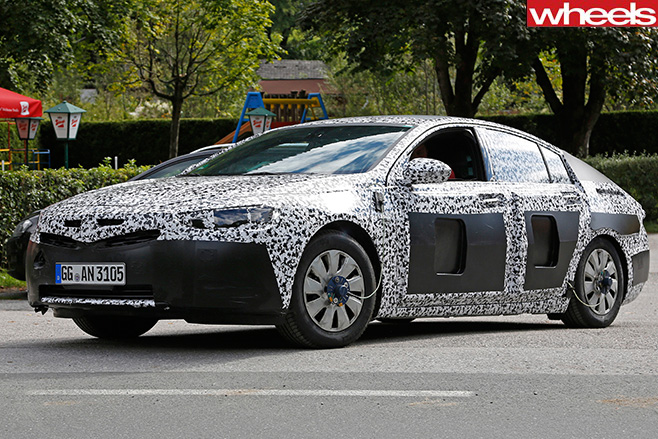 The next-gen Opel Insignia may replace the outgoing Australian-built Commodore.

While Jacoby wouldn’t confirm that the next-gen Insignia (badged as a Commodore) was definitely the replacement for the current rear-drive, Australian-built car, when asked if there may be a gap between the locally made Commodore and the introduction of an imported Commodore, Jacoby replied: “I don’t think so”.

There’s a fair amount of irony in all this, though. While Europe is heavily focused on displacement downsizing, V8 Commodore and Calais sales have remained consistently strong since Holden’s record 2002 sales year – 178,392 units, 21.6 percent market share and overall market leadership.

While those days may never be repeated, with no immediate salvation in the form of a new-generation SUV, it’s entirely up to the new-gen Astra and the Commodore’s replacement to improve on Holden’s current sales performance.

“With products and with a better perception for Holden, and a better customer experience…. we want to be an important brand in Australia, we want to have our fair share in the market, and we want to make most use out of this iconic brand.

“From the heritage point of view, there’s a lot of capabilities in respect of sporty vehicles, and in respect of high-performance powertrains – Commodore and so on – which will definitely be further utilised.”

But not with a V8 engine. Jacoby wouldn’t confirm that the next hot Commodore would be a turbocharged V6 AWD either, but he did restate GM’s position in maintaining a high-performance offering in Oz.

But it won’t be ‘affordable’.

Seems Joe Petrolhead better like the sound of four- or six-cylinders, because eight is out.

Makes you appreciate just how lucky we are to still have cars like the VFII SS-V Redline, doesn’t it? For now.