VOLKSWAGEN has announced a facelifted Amarok ute that is expected to lob in Australia late this year.

The big news is that the one-tonne German gets a 3.0-litre turbo-diesel V6, which will make it the only diesel V6 in its segment.

A full litre bigger than the current four-cylinder turbo-diesel, the new V6 jumps 44kW and 130Nm in high-output guise to 165kW and 550Nm. That’s at least 50Nm more grunt than the Holden Colorado, Mazda BT-50 and Ford Ranger.

The bigger engine results in the towing capacity increasing by 500kg to 3500kg, which now matches its main rivals. Three drive systems will be offered: rear-wheel drive; selectable 4MOTION all- wheel drive with a six-speed manual transmission; and permanent four-wheel drive via a Torsen diff and an eight-speed automatic.

European-spec V6 Volkswagen Amaroks will come in three power outputs – 120kW, 150kW and 165kW – and it’s likely the same options will be available in Oz.

The range-topping 165kW model gets bigger brakes, while all models feature VW’s Post-Collision Braking System, which automatically brakes the vehicle when the airbag sensors detect that a collision is occurring, to help prevent a secondary impact. 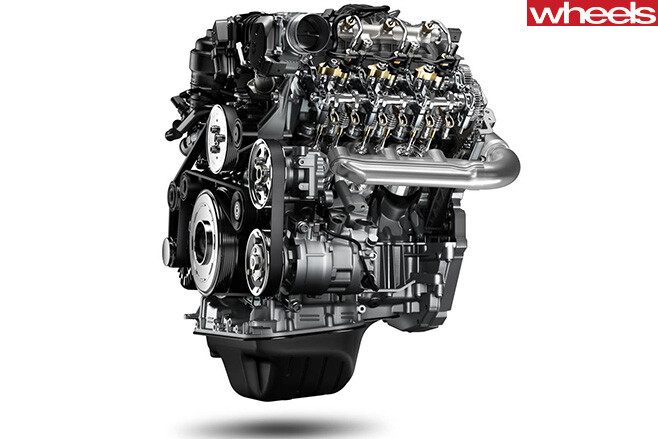 Even though the car features a bigger engine, Volkswagen claims that in top-spec, automatic guise) it matches the current 2.0-litre Amarok TSI340 for fuel consumption, with a combined figure of 7.6L/100km.

Inside, the new Amarok features a fresh dashboard and seats, while the outside is distinguished by new wheels and revised front styling.

Amarok gets speed-dependent steering for the first time.