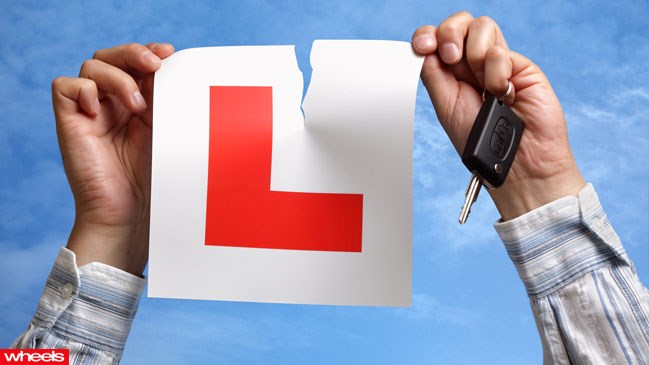 Returning with another gripe, this week Corby takes aim at dim-witted and inconsistent L Plater laws.

Would you teach someone to surf by imposing a rule that they weren't allowed to wade past waist deep? Or turn your youngster into the next Steve Waugh by only bowling at him underarm (and not even sledging him)?

Sure you would, if you were overly cautious to the point of rampant stupidity, much like the mental midgets who set some of our licensing laws.

Every time I take a good length journey during the school holidays I'm reminded of the dark denseness of the L-plate laws in NSW (laws that, bizarrely, disappear briefly if you traverse the ACT).

There are few things as dangerously frustrating as seeing a kind of moving traffic jam of braking and swerving nuffies in front of you, caused by the appearance of an L-plater, who is, through no fault of their own, travelling under the speed limit by as much as 20km/h.

In a tacit admission of the fact that it's actually dangerous for anyone on a freeway to drive significantly slower than the prevailing traffic, the NSW Government recently raised the L-limit from 80km/h to 90km/h.

This is like raising the punishment for drunkenly assaulting someone from a slap on the wrist to a kick up the ass (rather than a couple of days in the stocks, being pelted with off goat's cheese and dog mess, which it should be) - a move in the right direction, but not nearly far enough.

If you're going to teach someone to drive, surely they should be taught to do everything they'll need to do when they become licensed? Like driving at the national speed limit.

How, and when, are they going to learn to merge, and overtake, at 110km/h? And why must they do it when they no longer have a licensed, supposedly intelligent driver sitting next to them?

Instead, we force these poor, acne-riddled, emotionally confused gits to drive in a state of fear, watching traffic come pouring up their backsides and then seeing other motorists making stupid manoeuvres to overtake them, out of frustration.

Does it really help a young person's confidence, to turn them into a moving chicane?

Personally, I don't get angry at them, I just feel terribly sorry for them, and even more so for their parents, who are usually sitting in the passenger seat wondering if there's a worse time of year to be out teaching their beloved children how terrifying and un-fun driving can be.

I did used to get fired up about the stupidity of putting learners on the road in the midst of our highest road-toll seasons, but the fact is, with the enormous number of kilometres they have to get through on their logbooks, the annual holiday trip is about the only chance some people get to make a significant dent in it.

In many cases, the situation doesn't get any better when you get your P plates, because they come with nonsensical limits as well. What these young drivers need is proper education, not this fantasy-island idea that if we make them drive 10km/h slower they won't spin off the road while performing acts of idiocy.

I like the UK system, where newly licensed drivers are told they can wear a P plate if they want to warn other motorists that they're not fully competent yet. But no one does. Obviously.

What it comes down to in Australia, as usual, is the absolute, single-minded, myopic fascination that governments - some state governments at least - have with speed as the one and only cause of road accidents.

And yet in the ACT, common sense seems to reign. L platers in the ACT can drive at whatever the posted limit is, at least until they cross the border. Unfortunately in the Northern Territory, where they seem to be slightly more sensible, Learners are not allowed to exceed 80km/h - even if they're in a posted 130km/h zone (unless they're on an officially sanctioned driving lesson).

What we need, clearly, is a national system for road laws, because too many of the states can't be trusted to get it right, no matter what data they're given. And they can't all agree.

There are many things I dread about my children becoming teenagers - my daughter bringing home boys, my son realising how uncool I am - but teaching them to drive just about makes the top five. I can only pray our laws have reached some semblance of sanity by then.