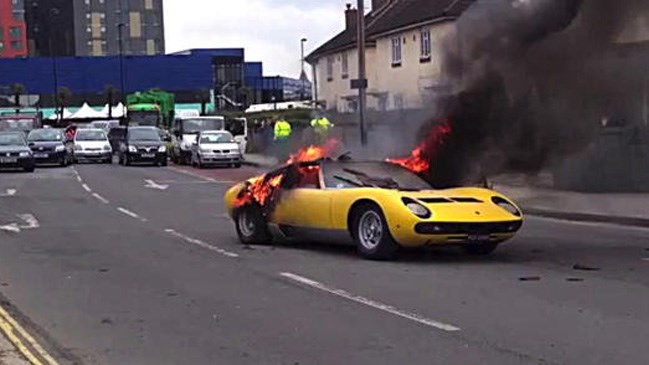 The owner of a Lamborghini Miura P400 SV was forced to watch helplessly as his classic supercar went up in flames on a London street.

The owner of a Lamborghini Miura P400 SV was forced to watch helplessly as his classic supercar went up in flames on a London street.

The owner, reported to be a wealthy London property investor, posted a five-minute-long video of the blaze on YouTube two days ago and it has since notched up more than 100,000 views.

He does not explain how the Lamborghini caught fire — but you can hear his voice in the video explaining that the firefighters are stuck in traffic.

When they do arrive, they promptly extinguish the flames — leaving an unsalvageable, blackened wreck.

The Miura is regarded as the world's first supercar.

Only 150 were built by the Italian automaker between 1966 and 1972 and they are regarded as a highly-desired item for serious collectors.