It’s kind of easy to forget just what a revelation the original Subaru Impreza WRX was when it lobbed here in late 1993. Think about it: there were no Evos, no factory turbocharged Falcons and Green Day hadn’t been invented yet. Instead we had VR Commodores and Celine Dion, so it’s no wonder the Rex was such an instant hit.

Fast forward to 2002, however, and things are different. Besides some stiff competition in the sub-$45K sector of the new-car market, and the shift to the maligned bug-eye look for the 21st century, Rex had gained some footprint and, more disturbingly, some kilos. But for all that, the engine was more
or less untouched.

That surging, lock-up-your-daughters feel of the first WRX was replaced by a milder sensation of power which, while it still delivered, needed to be wrung out of it, rather than just appreciated. The spec sheet tells the whole story and, along with more air to push thanks to its bigger frontal area (though not by much) the bug-eyed version of the Sube weighed in at a full 130kg over the original. And that, Virginia, is where the thing got switched from ‘kill’ to ‘stun’.

The solution was fairly simple, send in the hot-rod STi version and everything should work out nice. Um, yes and no.

What the ’02 version didn’t get was the full-welly 206kW engine that the first STis did. Instead, you got a similar state of tune, but 195kW and 343Nm as the end result. But you did get a six-speed manual gearbox that the WRX had been crying out for, since the thing had been fairly capable of outrunning its top gear in five-speed form. 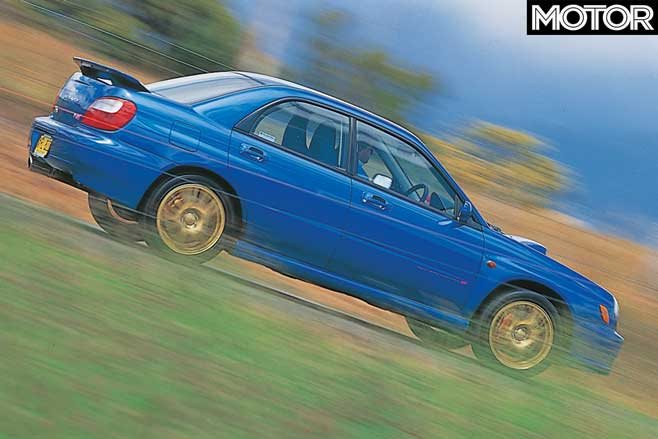 Now, you’d think that with a milder state of tune compared with the original STi, the ’02 version should have been faster than a standard Rex, but still tractable.

Well, you’d have been half right. Yes, the STi could blast down the quarter quicker, but it was only at its best if you were prepared to keep it spinning. Below 4000rpm, there lurked one of the biggest torque black-holes known to motoring man.

On a race-track, this was hardly the end of the world as revs were usually somewhere between 4500 and redline. But on the road, even with the six-speeder closing up the ratios a bit, the STi could be complete pants. The aftermarket reckons it can, with a suitable piggy-back computer, fix the Sahara-spec flat-spot.

Some fiddles to spark, fuel and boost maps and a couple of hours on the dyno, they say, and the STi is a different beast. 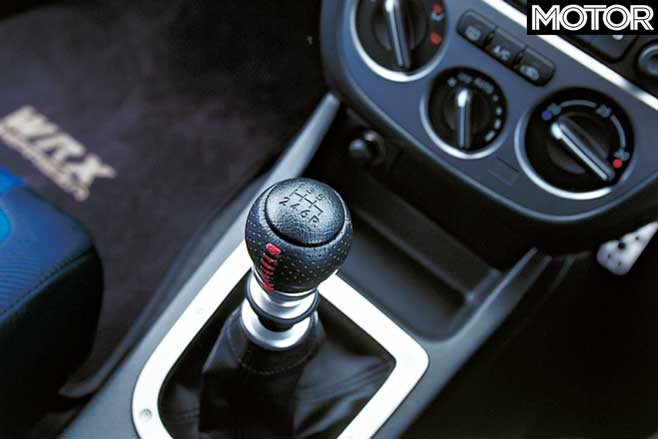 But first there’s a whole bunch of things you need to consider when it comes to WRX ownership. Not the least of those is the car’s appetite for clutches.

Obviously, with all that grip, something’s inevitably gotta give after repeated hard launches and red-light Grands Prix. And for Subaru, the smart thing to do was make the clutch the fuse.

A clutch that shudders on take up or won’t let you pick up reverse quickly without a graunch is a big chance to be on the way out. Any car that’s had a tougher, aftermarket clutch fitted is also a chance to destroy its centre diff or driveshafts in retaliation, so keep it all in mind.

Same goes for a Rex (and this includes the STi) with a seriously upgraded power output. 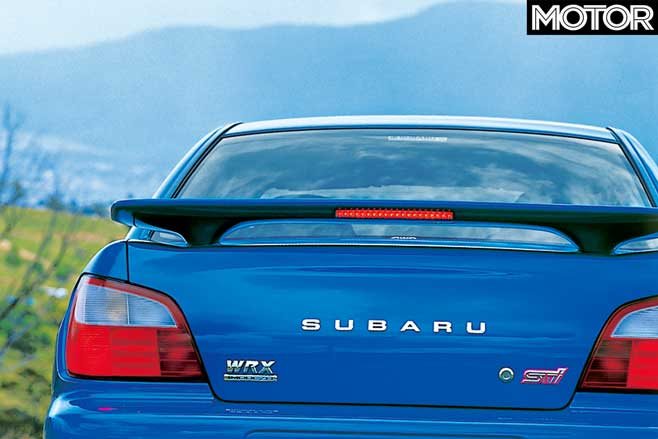 Thanks to modern computer technology, something like a WRX is ridiculously easy to tweak and some people just couldn’t resist winding it up till it went bang.
A big-diameter exhaust is okay (as long as it’s not one of those dopey drainpipe-looking ones that drone on the freeway) but much more than that could be asking for trouble.

A lot of them were fitted with just such an exhaust, an aftermarket blow-off valve, and that was about it.

If the car you’re looking at has those mods, we wouldn’t be worried at all, but more fiddles mean potentially more worries down the track. We’d be really wary of a car with the top-mount intercooler moved to a front-mount, and really, really, suspicious of a car running higher than stock boost. The EJ20 is good, but it’s not dickhead-proof. 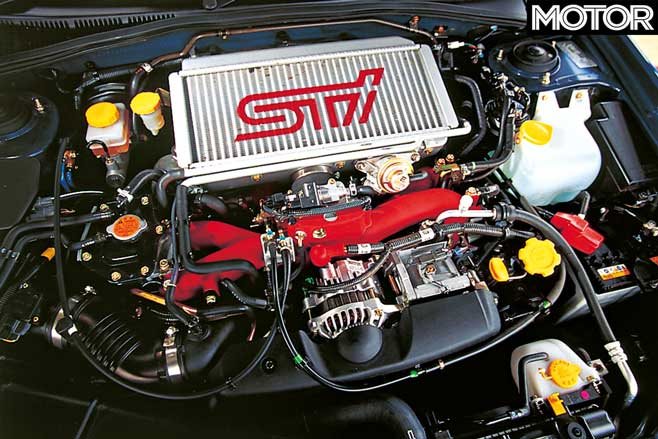 All this talk of clutch destruction brings us neatly to the subject of outright performance. The factory claims 0-100km/h for the ’02 model as 6.2 seconds and the STi has the potential to dip into the fives. Here at MOTOR we’ve recorded some fast times over the years but here’s the rider: you’ll only pull fast, really fast, times out of a WRX by being totally brutal with it.

Mind you, side-stepping the clutch is probably a lot kinder on the driveline that sliding the clutch home, because there’s a real chance that even the small amount of slip you’ll induce will torch the clutch plates.

An STi? Even more likely to have been thrashed, we’d say, if only because changing gear below 4000rpm just wasn’t any fun at all. At least having the body fall apart in a later Rex was a lot less likely. See, the extra track and wheelbase was not the real reason the new car was heavier: nope, that had much more to do with the vastly more solid bodyshell on which it was built. 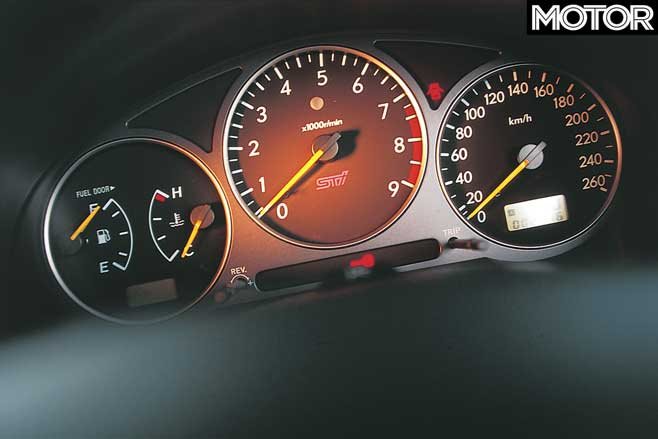 While the early cars could feel pretty loose by the time 70,000km had clicked over on the odometer, the later ones were much more solid. They were also a lot more grown-up inside, too, with better plastics and a classier overall layout.

Meanwhile, like the straight-line performance, by the earliest part of this century, the rest of the world had reeled the Suby in a little. The all-wheel-drive system still gave bigger than average levels of grip, but the Evo was proving that an all-paw handler could be sharper and the 200SX was reminding us of the thrills old-fashioned rear-drive dynamics could provide. 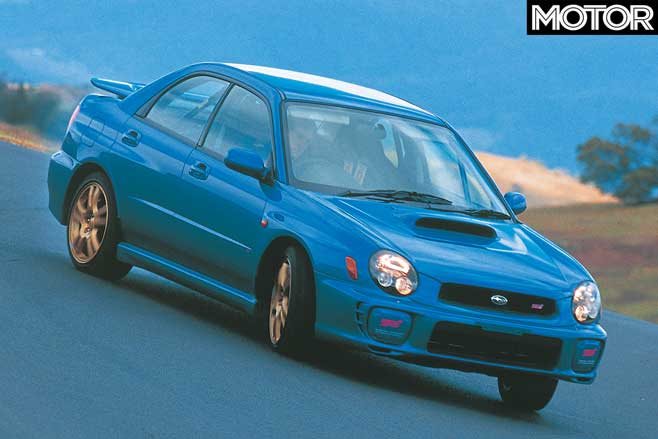 The biggest reminder that the WRX didn’t have things all its own way came when you hit a race-track. Where the Rex had once been unassailable in its price class as a weekend warrior, by 2002, it was, if not actually struggling, at least feeling the pinch.

And if you need proof that it wasn’t all beer and skittles, you need to drive a late-model STi with its active centre diff to really appreciate how much the ‘old’ models understeered. Either that or just stuff it too fast into a decent corner and wave bye-bye as the apex slides on past a good few metres away.

Speaking of which, you’ve also gotta check any Rex closely for crash damage. Thanks to the early WRX quickly becoming the ram-raid or getaway vehicle of choice, the insurance industry soon absolutely loathed the things. 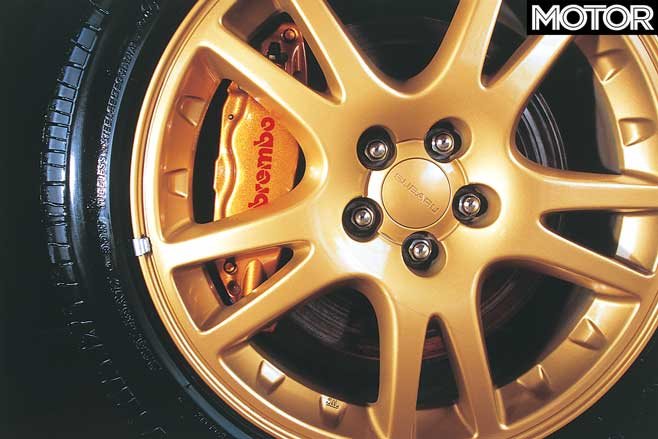 Even if you were a 50-year-old, tee-totalling monk, your Rex’s insurance premium would still make you eyes water more than the monastery’s cold showers. Everybody else really paid the price.

The upshot was that a lot of Rexes were running around without insurance so when the crunch came, as it so often did, many were patched up on the cheap. Watch out for wrinkled metal under the bonnet or the floor of the boot (suggesting it’s gone in backwards) and paint that doesn’t match like it should.

The right Rex will still bring a smile to your dial and, to be honest, those early cars are a real lucky-dip these days. The boggly-eyed versions mightn’t be as cool, but thanks to the ravages of time and distance, they’re the best buys in 2006.

More blast from the past on classic MOTOR 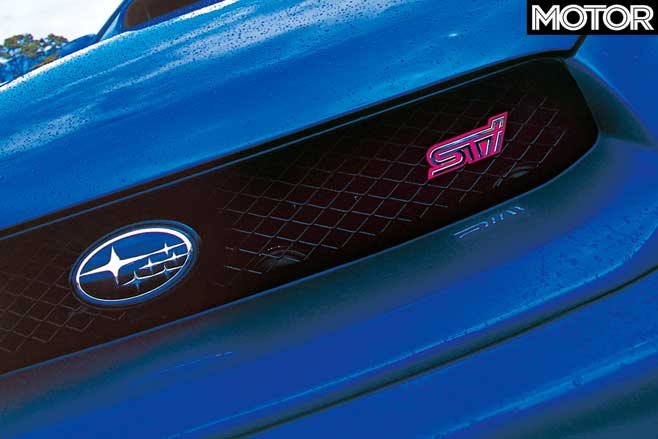 ““The damn thing is immensely capable, pretty damn affordable and just about idiot-proof. Anywhere in the 2800 to 6000rpm range, you’ll be pulling like a 15-year-old. Steering feel and feedback is sensational. Its precision stays with you as cornering loads go ballistic.” .” – John Cadogan, February 2002