The biggest trouble with working out where the Continental GT fits into the car world is just where to start with the damned thing. Look back over the last 50 years and there are just no valid reference points in the Bentley archives.

There have been newer or upgraded Bentleys, of course, but they’ve never been all-new, and they’ve all been mildly fiddled versions of hand-me-down Rolls-Royces. In fact, Germany has picked up a bronze medal in world domination (and Jesse Taylor’s picked a Melbourne Cup winner) since the last all-new Bentley. 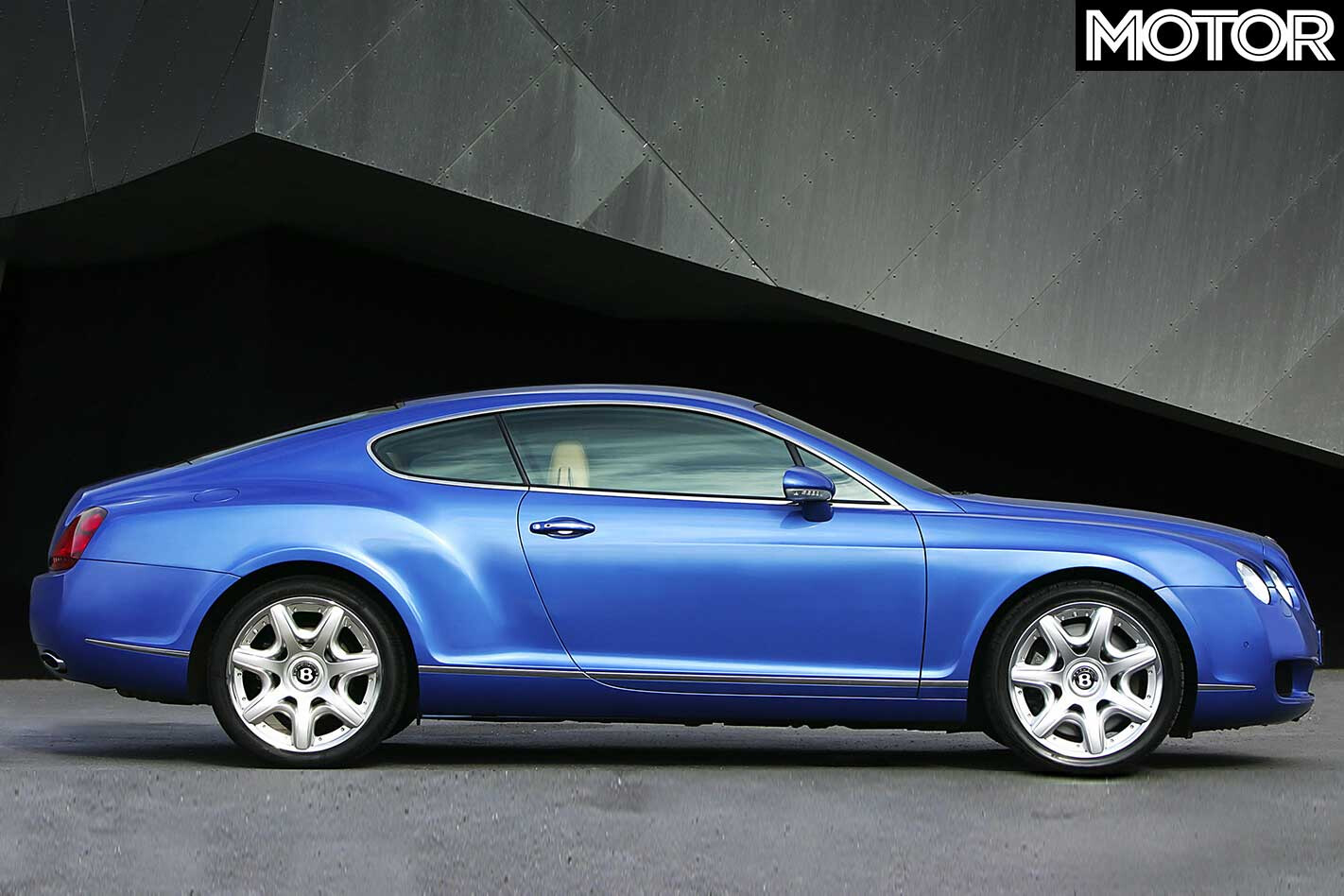 The Rolls-Royce days have gone the way of the British empire. All that’s left are memories, and that’s what the VW Group is banking on. See, plenty of people have good memories of Bentley, because they were so outrageously priced for old, low-tech trundlers that few people ever owned one. Into the mix comes this new Continental GT and, to everybody’s surprise, it’s bloody good.

It’s slightly confusing at first, because the DNA doesn’t fit with any reality from Bentleys past, yet it carries strong overtones of what you think a Bentley should be, provided you didn’t drive the old one. It is just too convincing and complete.

Parent company Volkswagen set out to engineer a Bentley, but, with many a rough old goat burped out wearing that badge, it also set out to build a seriously fast car, a car of unimpeachable design quality and something that set new standards.

For a car to be thrust upon us out of the clear blue sky and excel on merit and engineering in exactly those areas where its brand used to be smoke and mirrors, well, it’s left us a bit gobsmacked, frankly.

Not a single corner (or kilogram, but we’ll get to that) has been cut in the pursuit of the lofty heights of the brand’s image. In short, the Continental GT is a very, very impressive car. It bloody well oughtta be, I can hear you say, for $380,000, but, trust us, plenty of machinery up to and beyond that figure wouldn’t merit a Boxster engineer’s second glance.

The Continental does. Most people find its styling striking. The unkind reckon the back to be derivative and dull. Nobody, but nobody, is unimpressed.

The doors even open with a soft thud. Armour plating for the speccy models feels unnecessary. It’s just a rock. Slam the doors shut and the body won’t even ripple on the air suspension.

Of course, this isn’t just an all-new Bentley. It owes much to its VW parent, including the luxury-dud Phaeton’s superb steel monocoque chassis. Then there’s the engine. It’s a thumper in Phaeton-spec atmo form, but under the Bentley’s bonnet it’s an absolute monster.

Intercooled, with a pair of turbochargers, the 6.0-litre W12 crunches out 411kW and its 650Nm are available from 1600rpm. It feels that awesome, too, with a melodious (though slightly offbeat) warble, not a single unwanted tremor and a seamless well of sheer, unadulterated grunt.

That grunt is needed, as there’s a bit of beef here to shift. That diamond-hard feeling of solidity doesn’t come cheaply, and the Continental GT is a frightening 2385kg. That’s up there with hard-core off-roaders and, plenty of people will say, not appropriate for a mid-sized sports tourer.

The remarkable thing about the Continental isn’t that it’s this heavy, but that it disguises this beef so well on the road. It doesn’t feel as fat as engineering logic would insist and, in fact, it feels extremely taut in the chassis. And, while it’s not as spectacularly gizmo-loaded as some Japanese or even Australian luxo pretenders, it concentrates on getting the sumptuous basics just so.

The cabin is a beautiful thing, in every respect. Its seats are a combination of mid-corner grippiness and a level of sheer indulgence that’s as rare as a modest American athlete. There are traditional Bentley hallmarks, like the organ-stop vent controls (which are soooo cool) and knurled alloy finishes aplenty.

There’s genuine wood, traditional round vents and even reasonable headroom. And that’s just the back seat, which boasts good legroom for six-footers and proper seat shape, at least for two people.

But it’s the Bentley’s street cred that’ll see it a success, and it’s got the grip and grunt to earn that.

Underneath the skin and the Phaeton chassis lurks the all-wheel drive system out of the Audi A8, so it’s one of the better ones going around. There’s a six-speed ZF tiptronic gearbox at the back of the mighty W12, and its shift action is barely perceptible when there’s anything less than full throttle, reassuringly rapid when the pedal’s nailed through the thick carpet. It’s also got paddles, a la Touareg.

It isn’t, though, the best thing about the car. The ’box can actually be a pain, with its combination of full auto and then sequential modes. Flick a paddle for a downshift and the Conti will often, on part throttle, upshift one or even two gears for you, just when you don’t want it to. But with this much torque, it could get away with being direct drive, for all the difference anybody would be able to tell.

There’s a period up to about 40km/h where the Continental GT doesn’t feel that quick or special, but when its rate of acceleration remains at that initial, hard-thrusting surge all the way to the best part of 200km/h, it’s hard not to be impressed.

The brakes are also pretty astonishing. They never, ever feel like they’re struggling with what are immense joule counts, and they’ve even got a fair bit of pedal feel. At 400mm in diameter, the front rotors are the largest offered in production trim anywhere in the world. And they need to be.

They don’t even mind if you rip into them all the way into the apex of a corner. In some cases they seem to prefer it, and it seems to be the way to get more speed out of the big sucker – by gradually convincing it to turn ever tighter into the apex rather than one sudden snap of the tiller.

Steering feel, too, is convincing, especially for a car with driven front wheels and this much power. In fact, the whole chassis helps. The feel from the air springs is a generation on from other manufacturers’ jouncy, slightly off-sync efforts. This feels solid, corners flat and makes a billiard table out of Sydney’s worst roads. Mid-corner bumps never, ever throw it off line and it doesn’t give a hint of steering kickback.

With its myriad traction and stability control systems ditched, the chassis balance tends to be one of slight understeer, though it’s possible to work the tail into a couple of degrees of fuss-free oversteer on turn-in. Enjoy it while you can, though, because the big brain will get it sussed early, punch the drive to the front and return you to the stance it prefers.

You initially wonder whether $380k isn’t stretching reality a bit. It is an awful lot of money. Then you think back to the last Bentley. At $600k, that was a serious reality stretch. But this is Bentley back to reality. Back to where it’s never been.

How not to buy a company

Vickers wanted out of its Rolls-Royce and Bentley car making operations in 1998 and, when bidding closed, VW had offered £430 million for Rolls-Royce Motor Cars Ltd, BMW only £340 million. Then it got silly. Really silly.

Rolls-Royce Motor Cars didn’t own the Rolls-Royce name. It used it under licence from Rolls-Royce Plc (the aero engine group), so VW had bought itself a very outdated factory and the Bentley badge. Then it stumped up another £120 mill for Cosworth, which Vickers also owned.

BMW then picked up the Rolls-Royce badge for a pittance. It had an aero engine joint venture with RR dating back to 1990 and had been developing new RR and Bentley engines since ’94. So VW now builds Bentleys, BMW builds Rollers.