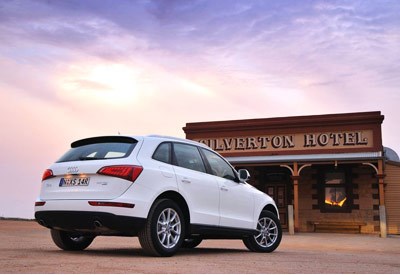 Hot on the bumper of the arrival here of Volvo's impressive XC60 mid-sized soft roader, Audi's five-seater Q5 seems destined to further shake up the premium SUV sector which until recently was monopolised by the BMW X3.

The Q5 is a vital part of Audi's bold plan to take a larger slice of the luxury market; has been running third place behind BMW and Mercedes-Benz for some years although it did top the Three-Pointed Star in January-February...

The Q5 is the second of three Q off roaders in which Audi is placing a lot of faith. The huge Q7 launched in 2006 has already managed to find a solid niche at the high end.And still to follow is the Q3 four-wheel drive, which is of compact size.

Audi is a brand on the charge. Last year, it busted through the one million global sales barrier for the first time. Here, it sold around 9400 vehicles last year so the forecast Australian sales target of 1000 Q5s in 2009 is not to be sneezed at.

Set for introduction this year are more new products including the new S4 and R8 V10. With slick road holding, a choice of four excellent engines and a smart interior, the good looking Q5 will certainly put a dent in the sales of the X3.

Audi insists the Q5 is prettier, lighter, faster and more economical than its competitors. We look forward to the inevitable multi-car comparo where these claims will be put to the test...

A slew of options is available that could take a loaded version close to $100K!

All variants get the new seven-speed Stronic twin-clutch robotised manual transmission, mounted longitudinally for the first time in the Q5. It offers the versatility of fully automatic mode or the ability to change gears through the gear shift function or optional wheel-mounted paddles, which we didn't feel inclined to use much.

Interestingly, the Q5 has ESP (stability control) with roof-rack recognition. When the removable rails are fitted, the ESP automatically senses and adjusts the stability control to allow for the possibility of roof load of up to 100 kg; weight that could obviously shift the centre of gravity.

Wheelsmag.com.au tested two Q5 versions on- and off road in the Snowy country at launch - the wonderfully flexible 3.0TDI V6, and the slightly better balanced though not as torquey 2.0 TFSI.

We ended up enjoying both engines but being more impressed with the TDI due to its effortless pulling power climbing twisting mountain roads. It has176kW on tap between 4000rpm and 4400rpm and an enormous 500Nm of torque available from 1500rpm through to 3000rpm.

Noise isolation is so good that the driver needs to look at the tacho and its low red line to confirm that it is indeed the diesel engine up front. Of course, typical turbo diesel driving characteristics are evident too, especially that fat low-mid range pulling effort.

A return of 10.4 litres/100km from the 3.0 TDI on the test route was excellent given the challenging nature of the drive, and the exuberance of the drivers.

The cornering poise is close to that of the X3, although the weight of the diesel does mean that understeer can emerge when pushing hard. With a lighter engine over the front wheels, the 2.0-litre TFSI feels a little less inclined to push the front end in the tight stuff.

Optional adaptive dampers give three settings of various degrees of firmness. Ride comfort wasn't an issue on the well maintained Snowy roads, but could be jolty on Sydney's third-world goat tracks.

The 2.0 TFSI doesn't seem as grunty as the V6 TDI (and isn't on paper either), but is a bit of a sweet thing anyway. This engine now combines direct fuel injection and turbocharging technology with the new Audi valvelift system (AVS) which varies valve lift for increased power output and improved fuel economy, officially 8.5l/100km.

While few Q5s are likely to be used off road much, there is a modest capability in the rougher stuff. Ride height is 200mm and the fording depth 500mm.

The permanent quattro all-wheel drive has a default 40-60 split, but in more extreme driving the quattro powertrain can direct up to 65 per cent of the torque to the front wheels, or as much as 85 percent to the rear.

Cargo is a useful 540 litres with the seats in their normal locations. This increases to 1560 litres when all but the two front are tumbled down. Handily, the rear seats move forward 100mm to increase the cargo space. They also recline a little.

The typically Audi quality is evident inside and five adults will get comfortable, The passive safety features include adaptive front 'bags with seat position detection, front side 'bags and thorax/pelvis protection.

We did note that the driver's visibility is compromised by the heavy A-pillar and the oversized outside mirrors.

A standard-fit hill descent assistance system helps negotiate steep slopes, holding the speed constant (at any speed between 7-30kmh). It works in reverse too!

The ESP and ABS use specially-developed maps for off-road driving to ensure maximum traction when required. But the retardation is nevertheless not great on loose gravel, even when off-road mode has been selected.

Included too are special compartments for wet or dirty materials, cargo sectioning for safe storage of luggage and equipment, and drink holders which will keep drinks warm or cool.

The Q5 comes with H7 headlamps as standard. The daytime running lights - with long-life bulbs as their light source - are already standard here.

With the Xenon Plus option, there 12 daylight-white light-emitting diodes (LEDs) arranged above each "wing" - daytime running lights. The Xenon Plus headlamps can also be combined with the adaptive light cornering system.

Other driver assistance systems such as Audi Side Assist and Lane Assist, Adaptive Cruise Control and Audi Drive Select round out a range of high-tech options.

Multi Media Interface with Audi Music Interface ($6200) and adaptive damping system with Dynamic Drive ($5215) are at the pricey end of the options list. Audi's MMI Navigation Plus system gets a seven-inch colour monitor and a 40MB hard drive, DVD drive, Bluetooth preparation and TV tuner.

Overall, the Q5 is an impressive package on first impressions and we look forward to a more searching evaluation in familiar urban conditions. 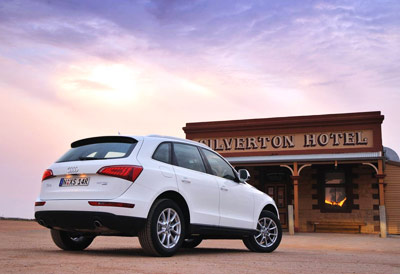 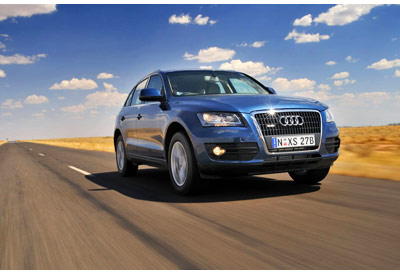 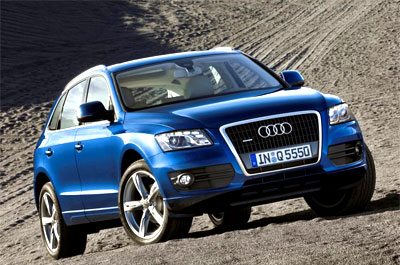