It is more grand tourer than sports sedan, but with the biggest V8 sold in Australia the Chrysler 300 SRT stakes out a patch all its own for image and punch.

It is more grand tourer than sports sedan, but with the biggest V8 sold in Australia the Chrysler 300 SRT stakes out a patch all its own for image and punch.

WHAT IS IT?
The all-conquering, fire and brimstone version of Chrysler’s pimpin’ sedan. It follows the classic rear-wheel drive V8 formula, and it has a 6.4-litre engine – so slap on your “There’s no substitute for cubic inches” t-shirt.

WHY WE’RE DRIVING IT
What the previous SRT didn’t need was more power. So Chrysler has given us just that: an extra 3kW of grunt to make the Russell Crowes of this world spin themselves silly in tyre smoke. More importantly, the old five-speed auto has been replaced by a new eight-speed transmission, so that getting that power down should be even easier. 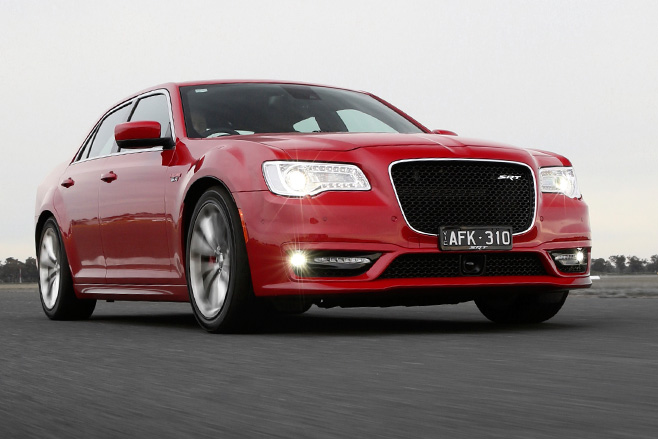 THE WHEELS VERDICT
The Chrysler 300 SRT is a swift grand tourer more than sharp, corner carving sedan. It’s a brute, but it is better mannered than before – a thug who can talk politely to his mother. It’s also a unique proposition, with unmatched style and ethos blended with serious bang for your bucks.

THE WHEELS REVIEW
THE POWERSLIDE at the end of the Temora airstrip wasn’t planned: it just happened. And it felt great – bloody great, in fact. The bloke in his Commodore ute with orange flashing light on top (some sort of authority figure) didn’t look as pleased as I was. That slide in the 300 SRT was controllable, smooth and backed by a raucous soundtrack. 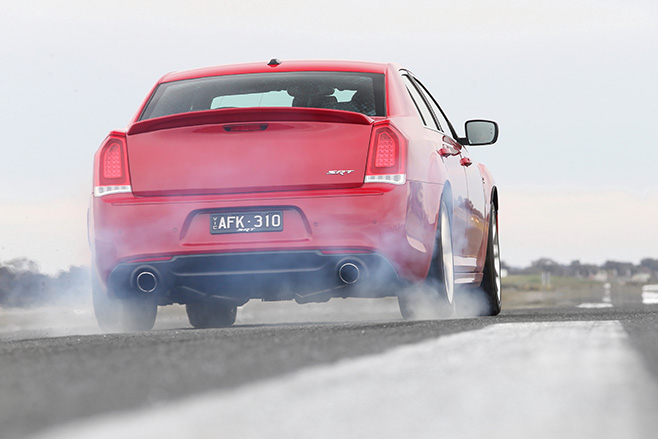 The new 300 SRT (no ‘C’ for some time, and now no longer badged an ‘SRT8’) has been given its own launch following the arrival of the all-new six-cylinder 300 a few months back. Yet this is the one that Australians will buy, as we love performance cars – and as the folks over at Holden and Ford will tell you, especially rear-wheel drive V8s.

Chrysler knows this only too well, and this car is unique to Australia: you cannot buy a 6.4-litre 300 in the ’States. Does that make up for them paying less for our Holden Monaro a decade ago? Answers on a postcard… 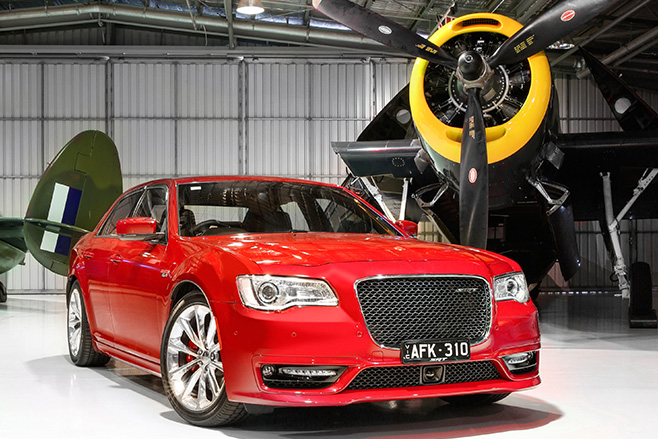 Regardless, there are now two trim levels for the V8-powered 300, both benefitting from an updated exterior – which keeps the classic high-waist and tapering roofline – and upgraded cabin. Chrysler says this is “more than a facelift”.

The previously limited edition 300 SRT Core is now a full-time model, and starts at $59,000. For $69,000, there’s the 300 SRT, which adds forged alloys, leather upholstery, sat-nav and – most importantly – adaptive dampers. Think of the Core as a rival for the Commodore SS and Falcon XR8, and the SRT as the HSV Clubsport combatant.

Both the Core and the SRT have the same powertrain, which means the 300 is the grand-daddy of them all in terms of numbers. Its 6.4-litre V8 is the biggest, has the most torque (637Nm!) and plays second fiddle only to the 430kW HSV GTS for power, with 350kW. That’s 3kW and 6Nm up on the old 300 SRT, thanks to two significant changes. 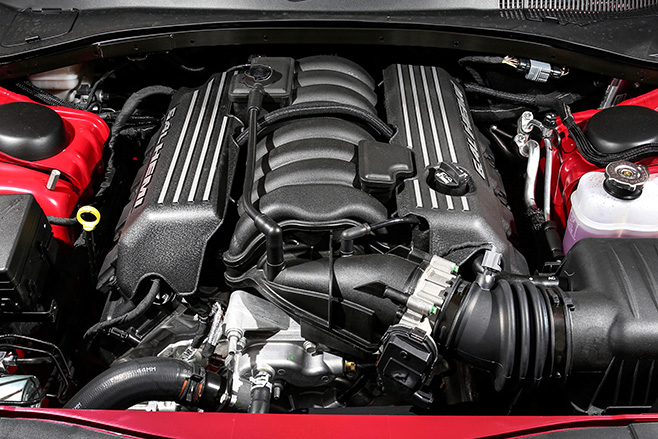 The first is the 300’s new eight-speed automatic, operated by steering-wheel mounted paddles. It’s 1.8kg heavier than the five-speed it has usurped, but that’s countered somewhat by the new electric power steering. Less important is the new centre console with a rotary gear selector, part of a cabin that sees a cheap and nasty dash-top and a foot-operated park-brake remain bugbears.

On a wet airstrip, the 300 recorded a 13.0sec flat standing quarter-mile time, reaching 100km/h in 5.0sec. There’s easily a 12-sec run to be had in the dry, especially with a launch-control system that allows you to set your own revs before feeding the Getrag LSD.

Yet it’s the overall manners of the 300 that have improved. The driving position is a tad high, and the seats are broad yet short under-thigh, but that steering is a vast improvement from the remote feeling of the old car, with much more feel and bite. It’s not a standout, but it allows you to manage the 300 well, even on heavily pot-holed country roads. 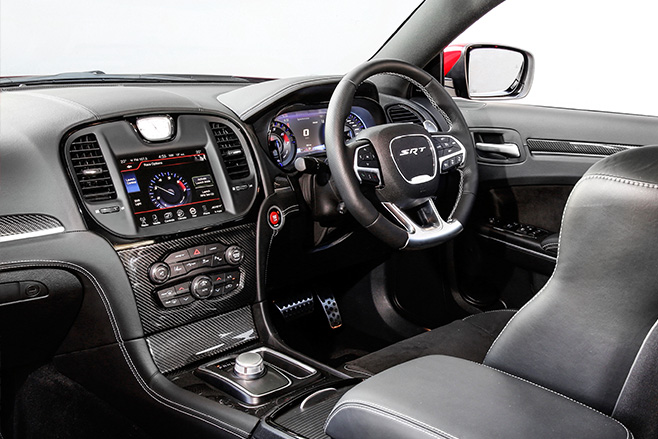 There’s a stunning exhaust note, which is far meatier and more warble-like at idle than a Holden V8’s. It eggs you on to mash the throttle at every opportunity, and spin the 245-wide Goodyear rubber. Yet the weight of the 300 is constantly whispering in your ear and talking to you through the steering and pedals. Thankfully, the four-piston Brembos at each end pull it up easily, and those adaptive dampers prove their worth

Supplied by Bilstein, the adaptive dampers are a serious step-up. On the central 8.4-inch screen, you can customise not only the dampers but also the steering, throttle and transmission – or pick from three modes: Street, Sport and Track. You can do this even in the Core model, but of course it misses out on the adaptive dampers and runs Bilstein monotubes instead.

The modes affect the car noticeably. Track, of course, is the harshest for ride, and you can hold the eight-speed in gear – it won’t up-change on you. Sport will change up for you, with swift but occasionally clunky shifts at 6100rpm, especially compared to the smooth yet still quick shifts in Street mode. The ride is still firm but far from uncomfortable in Street, with no crash-through on large bumps, and even in this softest setting, dive and squat are virtually nil. The result is excellent overall composure. 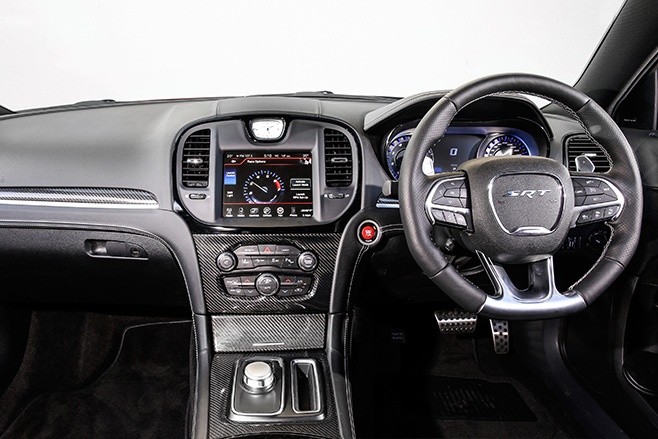 With that thumping great V8, the combo makes for confident, effortless country-road overtakes, and once you’ve settled back to 2000rpm cruising, engine and cabin refinement is impressive.

The 300 SRT is more grand tourer than sports sedan, as its weight subdues its on-paper promise. Yet it has very long legs on country roads thanks to its new transmission, and the steering provides a bite to match its punk/rat-rod style. It will win many over with its unique appeal. It’s not perfect, but there’s nothing quite like the V8-powered 300 for image and punch. 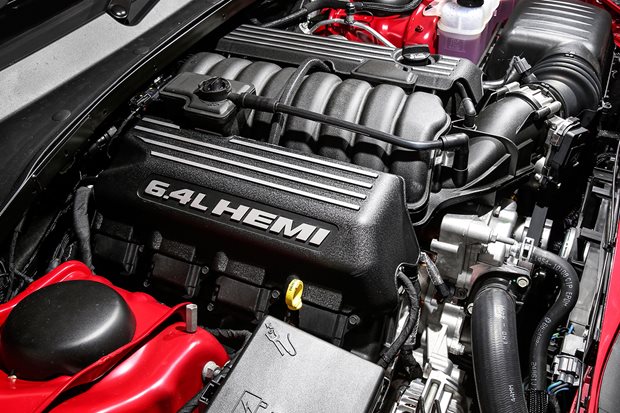 Building cars in Australia is not viable. Apparently. So how can Chrysler justify bringing in a special-order V8 for our market?