WHAT IS IT?
A slightly up-spec European alternative to more mainstream small hatchbacks. A front-drive five-door, it enjoys a devoted following among Francophiles for its ride quality and cruising comfort.

WHY WE’RE TESTING IT
It’s been fitted with a turbocharged version of PSA’s acclaimed 1.2-litre, three-cylinder PureTech engine, mated to a six-speed Aisin transmission. Citroen is so happy with the donk, it’s become the sole powertrain, superseding four-cylinder petrol and diesel. Besides that, there are minor interior and exterior changes.

THE WHEELS VERDICT
We’ve dubbed the Citroen C4 plain vanilla before and it’s still true, although the new powertrain, reduced weight and nicer interior all help bring a little more flavour (and frugality) to the fare. Practicality and long-distance comfort will resonate with converted Citroenisti, but most others will simply wonder: pour quoi?

THE WHEELS REVIEW
IT IS NO LONGER all that obvious to me why people buy French cars. I guess they are cheaper than German cars, while still having some (western) European cachet. But it’s been a long time since we assumed French quality to be much superior to that of mainstream makes, and French cars have had too many sales suicides to continue striving for quirkiness and character. 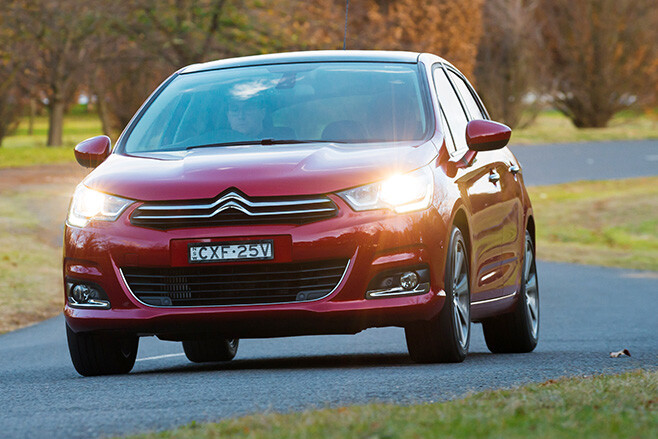 According to those who sell the Citroen C4, its customers are private individuals who put a priority on ride comfort and relatively high equipment levels. This first facelift of the French five-door delivers more of the same, wrapping a world-beating, 1.2-litre turbo triple that’s so good, they’ve ditched the diesel.

The 1.2-litre petrol Puretech three-cylinder engine produces 96kW and 230Nm and, Citroen says, is a staggering 105kg lighter than the four-cylinder petrol it replaces (and 125kg lighter than the diesel). No less significant is the six-speed auto tranny, standard fit across the range, which gives the C4 more gears than ever before.

In hand with engine stop-start, and with kerb weights now trimmed by up to 125kg, the new turbo triple slashes average fuel consumption to a diesel-duelling 4.8 L/100km. Characteristically, it seems, there’s nothing weird or polarising about it: no coarse three-pot growl, no rough edges, no turbo lag, just a really strong and instantly admirable powertrain.

You’d have to be a member of that increasingly rare species the Citroen-spotter to pick the new exterior lighting and seven-inch touchscreen inside. The latter brings sat-nav to both the Seduction (from $29,990) and up-spec Exclusive (from $33,990) versions, which also get automatic dual-zone climate, cornering fog lights and cruise control. Exclusive adds 17-inch alloys, panoramic glass roof, part-leather trim and a bunch more electronic sensors and cameras.

The interior is spacious, airy and pleasant. The materials are nice. The front seats appear small but are wonderfully accommodating. The rear bench is flat, and the glass roof robs headroom. I’m not expecting Jean-Paul Gaultier in there, but if you covered the steering wheel hub you couldn’t pick this from a Kia. 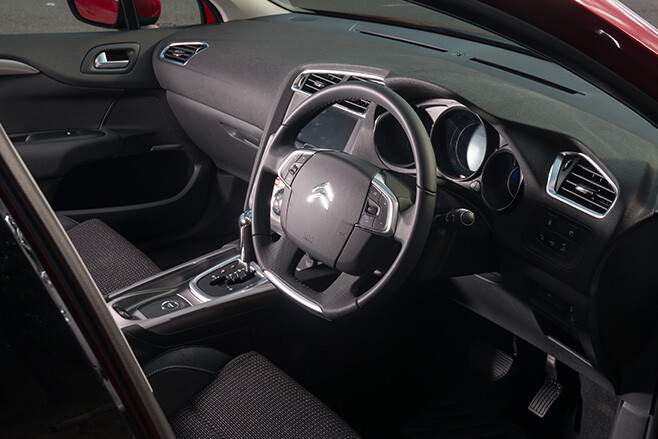 Mind you, there would be no confusion once you were underway. The C4’s suspension is remarkable simply in its competence and composure. It’s just on the taut side of the comfort scale, and potholed dirt roads highlighted the cabin’s excellent isolation. Citroen says the C4 is no hot hatch, but it is a car that makes you want to keep driving. And, I suppose, buying.