WHAT IS IT?
The Accent 1.4 is effectively the replacement for the i20, which has come to the end of its life and won’t be renewed in Australia. Hyundai has fitted the i20’s 1.4-litre engine to the entry-level Accent Active.

WHY WE’RE TESTING IT
We wanted to see if the cheapest Hyundai on the market was all about the price tag or whether it brought something fresh to the hatchback table. 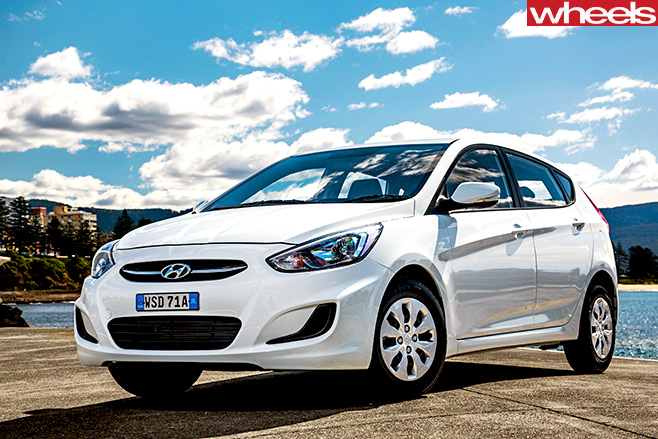 THE WHEELS VERDICT
The Accent has always been about basic, low-cost motoring – and no more so than with the new 1.4-litre engine. It’s a suitably underwhelming device, but partially makes up for it with a CVT tranny that does its best to tap into what little grunt the engine offers. 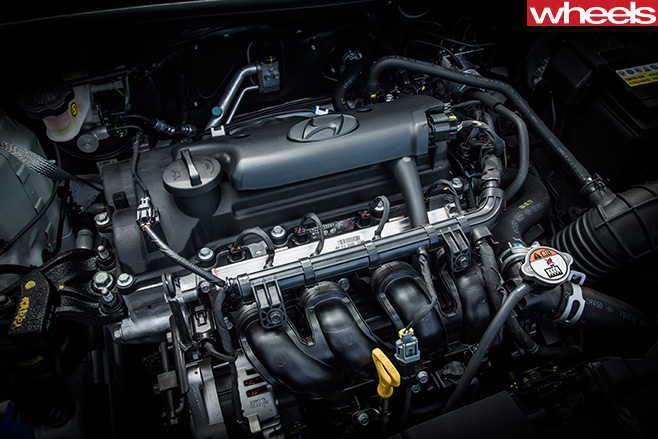 THE WHEELS REVIEW
Cast your eye over the “new” Hyundai Accent and you’d be forgiven for thinking there’s not much new. The sheetmetal is unchanged, as is the interior, while the suspension (MacPherson struts up front and torsion beam rear) continues as is.

Pop the bonnet, though, and there’s more to get excited about. Or not, depending on your point of view. For the price-leading Active model, gone is the direct injection 1.6-litre and in its place a multi-point 1.4. It’s the same engine used until recently in the i20, which the Accent Active effectively replaces at the bottom of the Hyundai range.

Outputs drop from the 1.6’s hearty 103kW and 167Nm (that engine is still available in the Accent SR) to 74kW/133Nm. That’s slightly less than some of the class favourites (Mazda2, Honda Jazz and Holden Barina, for example), yet the Accent isn’t embarrassed. 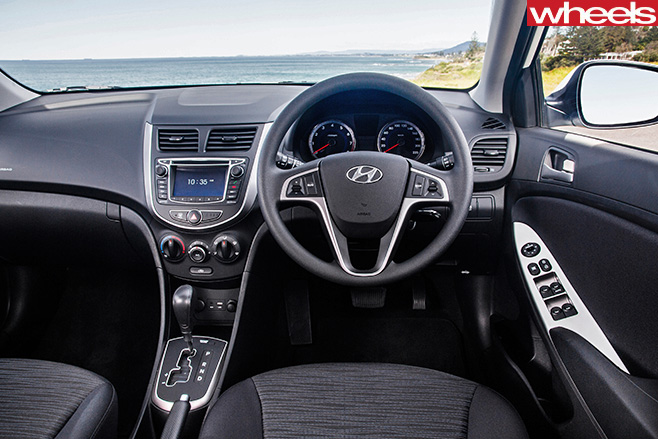 So far, then, there’s not much to get excited about. Except that you will have an extra $2000 in your bank account thanks to the repositioning of the five-door hatch or four-door sedan. While the official ask is $14,990 for the manual and $16,990 for the auto (plus on-road costs), Hyundai is offering the auto at $15,990 driveaway.

Equipment levels are basic and run to a CD player, Bluetooth phone and audio, and power windows.

If you want parking sensors or a reversing camera you’ll have to look aftermarket. And if you’re chasing alloy wheels, it’s a step up to the SR. 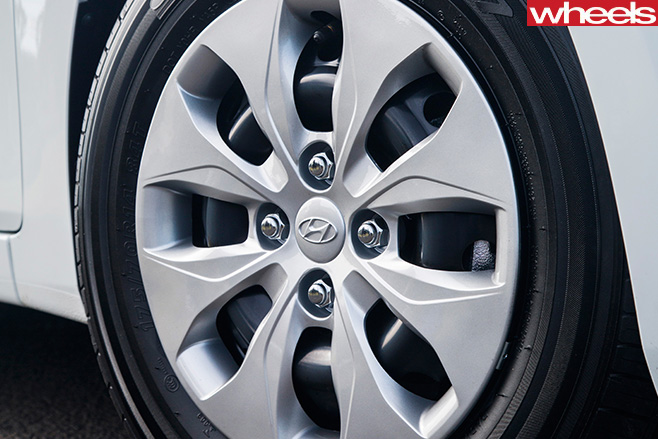 Instead the Active makes do with 14-inch steelies shod with 175/70 Kumho Solus tyres. It doesn’t take much of an arc in the vehicle’s trajectory to release a labrador-like yelp, while the relatively tall profile does little for steering precision. Initial responses are vague, and when it finally lurches into a corner the front end is doing most of the heavy lifting.

Despite the modest outputs, the CVT helps it fight harder than it otherwise would. Instead of the docile feel that can inflict small engines with autos, the Accent’s CVT feels far more willing, reacting faithfully to right-foot movements.

Flooring it usually has the engine revving in the 5000-5500rpm range and the best we saw was 5800rpm, which is still shy of when the power peak is developed. Hence you’re unlikely to ever tap into the full 74kW, a figure produced at 6000rpm. 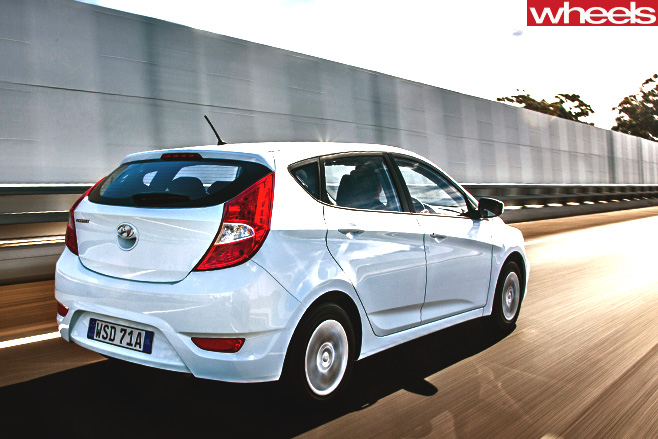 And you’re likely to have your right hoof pinned to the firewall regularly, especially once hills enter the equation. Keeping it bubbling along at 100km/h requires encouragement in the form of revs, too. It’s not a swift machine.

Still, there’s a refreshing – and unexpected – willingness to the way the 1.4 and CVT pair up.

Life has been pretty busy at the bottom end of the Hyundai showroom. As well as the i20 hatch there was the Accent hatch, Accent sedan and i30 (as well as its Elantra sedan cousin). And while Hyundai was keen to flog a new i20 locally, a production shift from India to Turkey meant exchange rates didn’t compute. The smaller i10 from the same factory was also deemed too expensive in a market segment where $1000 can mean the difference between success and failure. So Hyundai chose a repositioned Accent to kick off its range.

Click here to read the full range review of the Hyundai Accent. 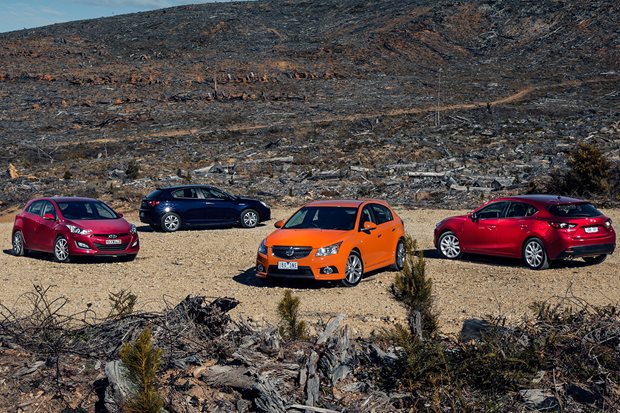 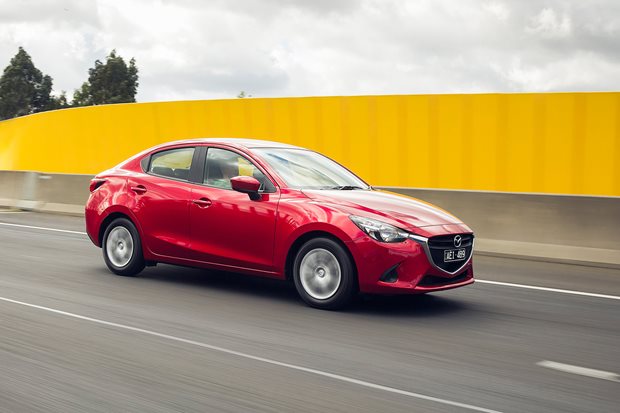 Mazda is having another crack at the languishing light sedan class, and the Mazda 2 Sedan brings more kit for its hatchback sibling as well 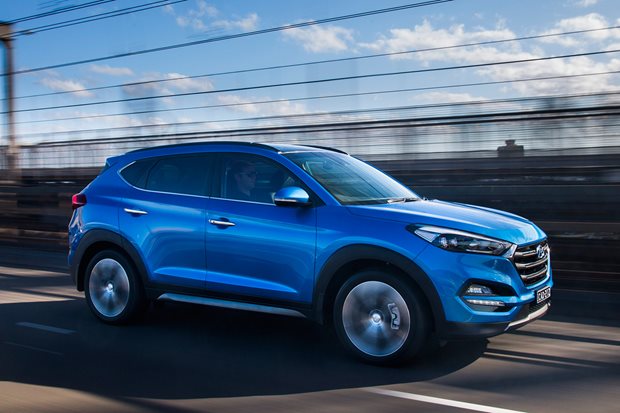