Forget grunt, it's about grip with the new Lexus GS F medium performance sedan that uses an old recipe to find new and exciting flavours of fun.

WHAT IS IT?
The Lexus GS F is the performance flagship of the GS premium medium-sized sedan range. It's about the same size as a BMW 5 Series and Mercedes E-class, yet can’t match the power or performance of their respective flagships. It's more a rival for the Audi S6.

WHY WE'RE TESTING IT
It's a new addition to the Lexus range, and the fourth to get the F treatment, which is Lexus's take on Audi S, BMW M and Mercedes AMG. It uses the same 5.0-litre V8 engine as the smaller RC F coupe, but in a more practical sedan body.

MAIN RIVALS
Audi S6, BMW M3 or BMW M5, Jaguar XF S, Mercedes-AMG C63 or E63 − depending on whether you're trying to match on price or size.

THE WHEELS REVIEW
Forget power. Grip is the new god.

Well, Lexus would say that, wouldn't they? After all, the company's new medium-size performance sedan − the GS F, launching in Australia in February with an expected $155K price tag − has ‘only’ 351kW and 530Nm with which to tackle the might of BMW's 423kW M5 and Mercedes-AMG's 430kW E63, both of which use twin-turbocharging to amp their V8s. 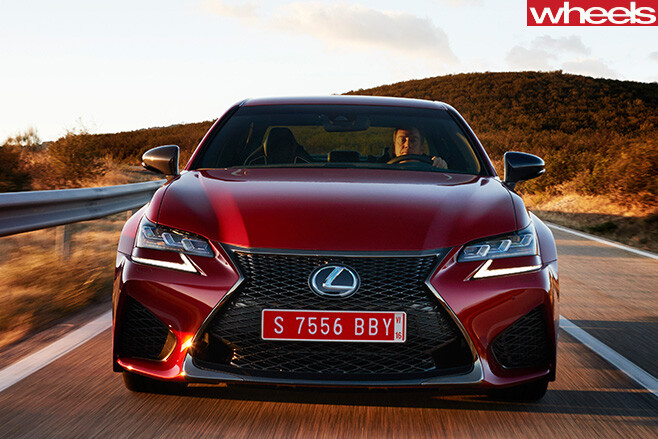 So, in a bar-room numbers war between owners down the posh end of town, the Lexus can only lose (unless you're talking price, because the GS F's tag is way closer to the $157K C63 than the $250K E63). So of course Lexus played the grip-over-grunt line.

Except… Lexus didn't say grip is god. Nor is Lexus deluded into thinking this 'underpowered' rear-drive performance sedan is a true rival for those E-class and 5 Series German heavyweights. That's a misconception others will leap to, and to their detriment.

Lexus, to its credit, is pushing a simple − and appealing − line: judge the GS F for what it has and what it does.

And by god it does everything well. Extremely well.

The Lexus GS F is a sweet balance of sporting flavours, where no one ingredient overpowers the others.

It's the kind of sports sedan that loves driving, and not a little like an Aussie HSV or FPV (remember them?) with more polish.

At its core sits the same 5.0-litre naturally aspirated V8 engine that powers the RC F coupe. The two powerplants are identical, except for a few additional engine weights to dynamically balance this thundering heart. 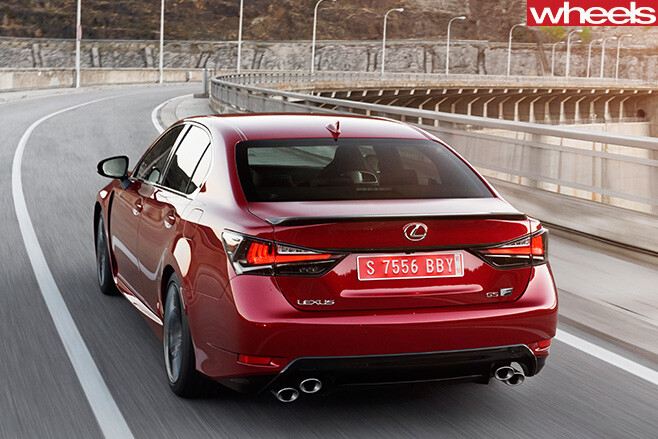 It's a fantastic engine that hits hard and screams harder, all the way to its 7300rpm cutout. Sure, it can’t match modern turbocharged engines for low-rev torque, which means you'll be banging on the eight-speed auto's paddles more often to keep revs high, but involvement feeds excitement. And it's searingly quick, as a 0-100km/h time of 4.6 seconds highlights.

The sound of this engine on max attack is intoxicating. Lexus engineers spent considerable time ensuring the exhaust note delivered what enthusiastic drivers want in a soundtrack. There's a bit of aural trickery involved, too, via something Lexus calls Acceleration Sound Control (ASC), which harnesses the front speakers to emphasise intake and engine sounds, while the rear speakers are called on to add some baritone boost to the exhaust note. There's a button inside to turn this off or on; not sure it makes enough of a difference to justify the extra weight of the dedicated sound system.

Our day-long drive included some hot laps of the Jarama race track near Madrid, and it's here where the grip from the GS F's chassis and its Michelin Pilot Super Sport tyres (255/35 R19 front, 275/35R19 rears) first impressed. The GS F runs wishbones front and a multilink rear like lesser GS sedans, but on much firmer settings. The chassis gets a few judiciously placed strengtheners to improve dynamics. The result is an incredibly sharp yet stable − and flat − platform for spirited driving. It's a one-mode suspension tune, and doesn't have active dampers to adjust the ride to suit the mood. It is firm, and it is reactive to road surfaces, which may not play well at times in Australia.

The GS F's electric steering feeds inputs quickly and fluently to the front end. It pivots into corners with poise, and it sends a constant stream of feedback to the driver from the road.

Get on the power too early, and the front end will want to push wide. Then the GS F's trick torque vectoring diff - standard for Australia - apportions drive to the outside rear to help 'steer' the car around and out of the corner. Coming into corners, it can do similar tricks on trailing throttle under brakes, keeping the car stable right to the apex then helping you hustle on exit.

The best part is the torque vectoring diff doesn't require any conscious involvement from the driver, nor are its transitions felt. It beavers away feverishly to ensure the driver gets all the benefits without any bother.

Lexus is not the only car brand capable of such wizardry, but I've not driven a car where its influence has been so cohesive and effective. On the road, the GS F continues to impress, but that's less about mid-corner grip and more about how all of the GS F's elements gel so neatly together. Unlike similar-sized performance sedans from M and AMG, the engine does not dominate all other components of the Lexus's dynamic prowess. All elements are balanced, in harmony. It's not unlike the Toyota 86's mantra, except this time with a
5.0-litre V8 at its core.

So, while some may choose to see a big V8 with no turbochargers or superchargers in a premium rear-drive sports sedan as an outdated dinosaur, that's not fair at all. This is a thoroughly modern interpretation of an old favourite, and deserves respect for that if nothing else.

Lexus Australia's sales ambitions are not huge − 40-50 a year − so the GS F won't add significantly to the bottom line. But it does give Lexus's growing reputation for building spirited and engaging performance cars a massive boost. And rightly so.