It has taken a while, but Lexus has finally joined mid-sized luxury leaders with a 2.0-litre turbo engine for its top-selling IS range.

WHAT IS IT?
The latest update for the IS, Lexus's most affordable rear-drive model and a car that is still the brand's top seller. The Lexus IS200t is the biggest news in this refresh, adopting the new 2.0-litre four-cylinder turbo engine that's weaving its way through the Japanese luxury brand's line-up.

WHY WE’RE TESTING IT
While the luxury world continues to go SUV mad, the mid-sized sedan category is the heartland that key Lexus rivals such as Mercedes-Benz and BMW invest so much in. Lexus' answer, the IS, has always been great value, and now it has a new 2.0-litre engine with turbocharger tech. Can it match its European rivals for punch and efficiency?

THE WHEELS VERDICT
A classy addition to an accomplished model, with better performance and fuel efficiency. THE WHEELS REVIEW
FEW CARS have experimented with as many engine configurations in such a short lifespan as the entry-level version of Lexus’ top seller, the IS. The original IS200 mimicked the dominant BMW 3-Series of the day with an inline six-cylinder layout, before shifting to a V6 configuration for the IS250.

Now the IS200t has brought Lexus into line with burgeoning mid-sized competition with a 2.0-litre four-pot turbo. Lexus Australia chief Sean Hanley says: “It just took Lexus a long time to make sure we got it right.”

The 200t is the usual turbo deal: more power and torque, the latter produced lower in the rev range, and with an 18 percent fuel economy improvement to boot, thanks in part to auto stop-start. The IS is now fighting it out with class heavy hitters at 7.5 litres per 100km.

The raw numbers have the power up to 180kW and torque at a stout 350Nm. Throw an extra couple of ratios into the auto – for eight in total – and that translates to a 0-100km/h claim of 7.0 seconds, more than a second better than the 250.

It plonks the 200t closer to the outputs and claims of the Mercedes-Benz C250 and BMW 330i, the latter recently updated. The IS200t is porkier than the BMW 3-Series and Mercedes-Benz C-Class, and weight has increased with this latest update – predominantly due to the eight-speed auto.

The new engine has a generous dollop of low-rev muscle that makes for more relaxed light-throttle motoring, albeit with some darting between ratios when reapplying power. With excellent refinement and the ability to access that full 350Nm from 1650rpm, much everyday acceleration can be tackled low in the rev range.

Sink the right foot and it maintains its newfound enthusiasm up to its shift point, which varies between 5800rpm and 6000rpm. It feels like there’s more revs left in it but the computer intervenes, even when in manual mode and the sportiest Sport+ mapping.

Speaking of which, forget the doughy Eco mode that insists on taller gears to the detriment of driving enjoyment; Sport is more enticing.

Chassis tweaks are minimal and come down to a stiffer body and a Yamaha-developed “performance damper”, which absorbs engine vibrations and allows the suspension to work uninterrupted.

Variable dampers on the F-Sport and Sports Luxury allow for minor adjustment to the ride, with the Sport setting reducing unwanted movement. The IS200t’s chassis is capable and well controlled. Grip from the 18-inch Dunlop tyres is good, but it’s an understeerer when pushed. 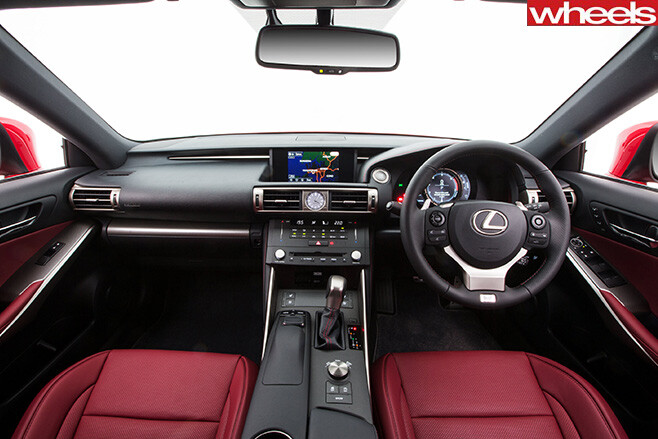 Other IS traits remain. The interior is more modern than traditional. In the F Sport there’s no wood, for example, but the faux carbon fibre, soft leather (it’s the cow-made stuff) and rubber-like touch to some knobs and finishes raises the luxury level. Throw in some stitching around the cowling and the occasional blast of textured plastic and it’s an upmarket space.

Gripes include the foot-operated park brake that occasionally takes a dig at your left shin, and the tight rear leg room. The Luxury misses out on a digital speedo but little else, with equipment levels a highlight.

Indeed it’s value that’s still the standout of the IS range, with the new engine bringing it closer to its luxury opposition.

Click here to read the full range review of the Lexus IS.