That attention has been lavished on the new Lexus RX is clear from the styling, but the popular large SUV needs to make more than a visual statement if it is to match the BMW X5 and Volvo XC90.

WHAT IS IT?
The fourth generation of the most popular car in the Lexus line up, the RX SUV.

WHY ARE WE DRIVING IT?
Because it sells like hot cakes. Lexus has sold more than 2.1 million RXs worldwide since it launched the model in 1998, but the RX is facing stiffer competition from new, seriously impressive rivals like the Audi Q7 and Volvo XC90. 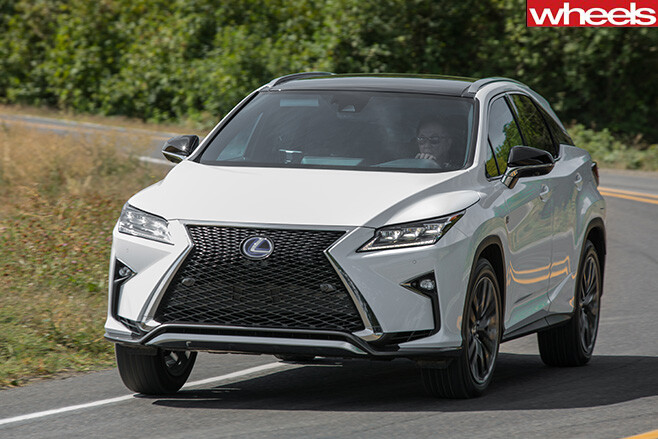 VERDICT
A brilliant interior and edgy design is let down by carry-over drivetrains and average dynamics. Effervescent 2.0-litre turbo four in 200t is the pick, but annoyingly, Australia isn’t getting it in F Sport trim.

THE WHEELS REVIEW
BLAME (or thank) Akio Toyoda. He’s responsible for the mad scattering of lines, creases and angles stamped so proudly into the body shell of this new Lexus RX. But not in the way you might expect. As this fourth-gen RX neared the very end of five years’ development, Akio dropped a bomb on the chief engineer.

The chief engineer shook his head sadly, the way you might when remembering a dead loved one, when asked how much his team needed to change.

One month later the new design was finished, its lines sharper, its styling bolder, its details more aggressive. Akio was happy. But this RX has to be more than a visual statement. It needs to have the engineering depth and technical nous to trump fresh rivals, such as the Volvo XC90, that have set new benchmarks for quality and dynamics.

On the surface, things look positive. This new model is 120mm longer, 10mm wider and has had its wheelbase stretched by 50mm, which translates into 25mm more space for front and rear passengers. There’s a lower hip point and increased headroom. And there is a suite of standard safety gear labelled Safety System+, which combines pre-collision and lane departure warning systems, automatic high beam, and active cruise control. Lexus says all of its cars will include Safety System+ as standard by 2017.

Three engine choices will be available at launch in November: a 2.0-litre turbo petrol in the front-drive 200t, and a tweaked, more powerful version of Lexus’s venerable 3.5-litre V6 in the all-drive RX350. The atmo V6 is also mated to an electric motor in the 450h. The V6 now sports direct injection, and in the 218kW/360Nm RX 350 it uses a new eight-speed auto (the 450 retains its CVT tranny). Lexus reckons the 350 will be the volume seller, and while the V6 is smooth, the calibration of the new ’box is less convincing and delivers jerky shifts under part throttle.

The clear dynamic standout is the six-speed auto, entry-level 200t. The new 2.0-litre turbo is eager and zingy. It isn’t only more refined and efficient than the brawnier V6, but also trumps the 450h for smoothness. No RX is what you’d call inspiring to drive, thanks to light and lifeless steering, but F Sport models feel the most tied down. Body roll is well controlled and while it will understeer if pushed, the handling is predictable and adjustable.

The trade off is a firmer, choppier ride but this is preferable to the sloppy body control and head toss so prevalent in variants without the fancy sway bar tech.

Annoyingly the 200t F Sport isn’t coming to Australia. Lexus Oz is taking the 200t only in base Luxury form, which is a glaring oversight given the 350 and 450h will be offered in all three equipment grades: Luxury, F Sport and Luxury Sport.

Another faux pas is the absence of a fuel-saving stop/start system in the RX 350, particularly given it’s a standard feature on the 200t. Lexus had no answer when quizzed on why the 350 missed out. Where the RX excels, though, is its interior. The RX cabin is one of Lexus’s best, with an airy, effective design dominated by a massive, 12.3-inch floating central screen in higher-spec variants. It’s also beautifully made and suitably quiet, although there is some tyre roar on coarse chip surfaces.

But like the rest of the car, the interior is a masterstroke of convention. There’s no ground-breaking tech or fresh ideas. And while the RX pushes boundaries with its bold and aggressive exterior styling, it falls flat where it matters most: how it drives. It leaves you thinking Lexus could have done more, and means the RX is only a small step forward at a time when its competitors are taking leaps and bounds.