A thumping turbo V8 at the heart of the Mercedes-AMG C63 S aims to make life difficult for the BMW M4, Audi RS4 and Lexus RC F

THE all-new Mercedes AMG C63 AMG is here – and we’ve thrashed it around Australia’s most famous race track.

WHAT IS IT?
The fastest C Class money can buy. Mercedes-Benz isn’t bringing the less powerful C63 to Australia, instead going only with the more powerful S. And for those tempted by practicality, there’s a wagon version too.

WHY WE'RE TESTING IT
For the Australian launch of the Mercedes AMG C63 S we were invited to Bathurst to give it a proper blast around Mount Panorama.

THE WHEELS VERDICT
The C63 formula is unchanged but it’s better than ever in this latest model. And it relishes a decent blast around Mount Panorama.

PLUS: Fantastic V8 – both in sound and performance; vaguely practical
MINUS: Engine ultimately outdoes the tyres; steel brakes overcome by Bathurst stops 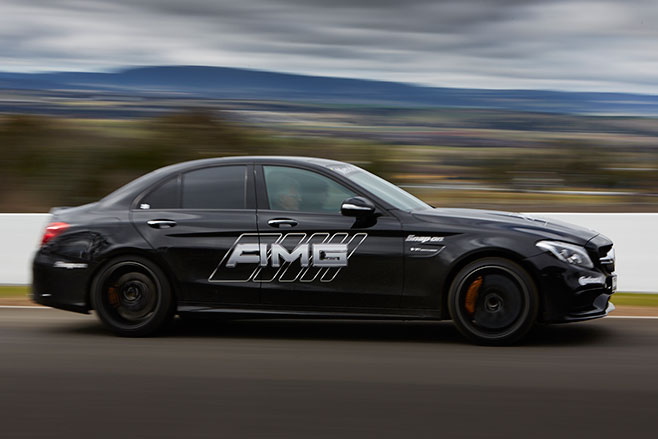 THE WHEELS REVIEW
TICKLING 220km/h cresting the hill while climbing Mountain Straight at Australia’s most famous race track is something to get the heart started on a chilly Bathurst day.

Anything pulling that sort of pace has to be brisk – seriously brisk. In this case it’s the Mercedes-AMG C63 S, the car that aims to make life difficult for the BMW M4 and Audi RS4. And anything from Alfa Romeo, Jaguar and others that’s somewhere around the corner.

The latest generation C uses the same 4.0-litre twin-turbo V8 from the hero of the range, the $295,000 AMG GT S. The sump is wet instead of dry as it is on Benz’s two-door hero, but the C63 S is nonetheless a weapon befitting one of the world’s most iconic tracks.

With 700Nm the feisty C63 triggers the traction control as it gets light over the blind crest that on a 60km/h lap of the track during any other day barely feels like a rise.

After its brief electronically-induced pause the V8 is back and roaring throatily as it rushes towards Griffins Bend for the climb up Australia’s most challenging track.

Solid carbon ceramic stoppers bite hard and the car hunkers down for the fast right-hander that has loads of grip if you get the line right; too far left and the falling camber can suck you towards the ever-present ripple strips and into one of the many unforgiving walls of Mount Panorama. On line and the rise of the track and gentle camber team with the nicely sticky Michelins to slink you safely around. 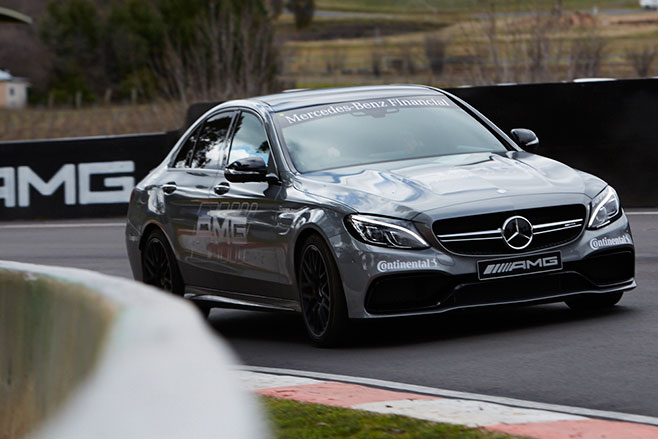 We’re running with the traction control on, but in its most aggressive Race mode. It’s clearly limiting punch as the rear fights for traction for the run up the mountain. But it’s clean in its action, quickly unleashing those full 700Nm as things have straightened up.

Pitching hard into the tight left-hander at The Cutting takes extra concentration as the light steering of the C63 quickly points the nose towards the apex.

Then it’s the final crest of the mountain before flowing the C through the string of left-handers that characterise Mount Panorama’s peak.

It’s quicker than any four-door deserves to be, and impressively agile – something that comes into play through the steep descent through The Esses and the Dipper.

The 19-inch tyres protest regularly with a distinctive high-pitched squeal. But for road-going hoops they’re standing up impressively to the punishment.

Fire in to those tighter bends too quickly and the nose will understeer slightly. But there’s loads of grip before that. Similarly, if you’re too eager on the accelerator out of the somewhere like The Chase it can test the traction at the nose. 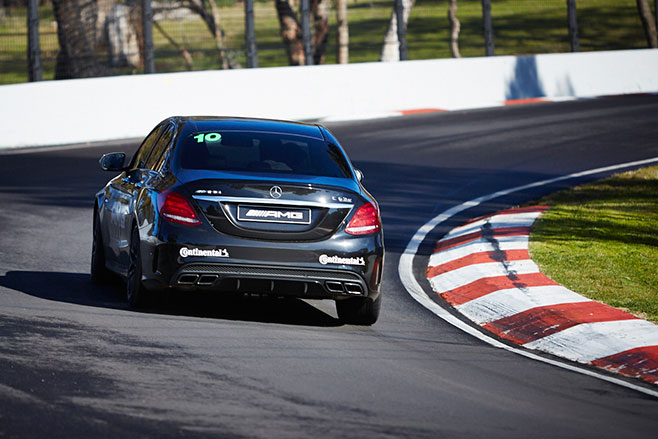 The rear is surprisingly well tied down, albeit ready to wag and wheelspin without electronic assistance. There’s no shortage of grunt, something the throaty sedan relishes along Bathurst’s many long stretches.

And while you can feel the weight with some leaning on quick direction changes – there’s 1655kg to hurl around – the C63 S never feels flustered. It’s slick and composed – and impressively quick.

Some more weight to the steering – particularly through fast corners – would add to the already high levels of composure, but it’s minor stuff for what is a hugely competent and fast four-door. 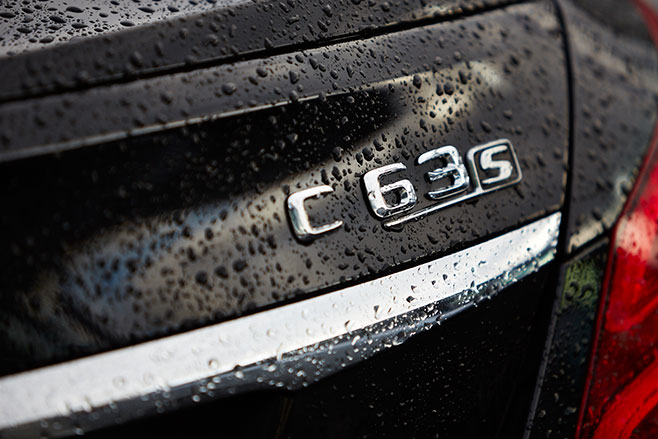