The 2016 Audi R8 V10 Plus moves the game forward with an all-new chassis, more power, and sophistication everywhere.

WHY WE'RE TESTING IT
The 2016 model represents the first full generation change for the Audi R8. Effectively all-new, it leaves behind any Lamborghini legacy and aims to be a better car for both the road and the racetrack. Oh, it’s also the fastest production Audi. Ever. 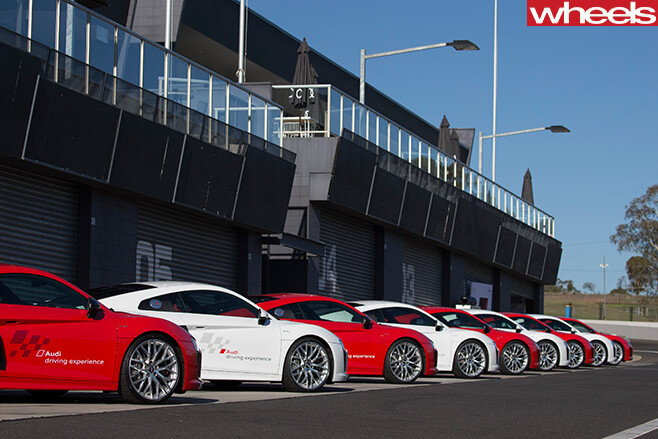 THE WHEELS REVIEW
It was right about when I noticed the speedo climbing past 265km/h over the crest on Conrod Straight that I reflected, briefly, on the wisdom of launching a new road car on a motor racing circuit.

Especially this circuit, which had hosted the Bathurst 12 Hour for GT cars just a day earlier.

Normally, race circuits humble even very good road cars. But the new R8 V10 Plus was clearly in its element.

That speedo reading I saw – with possibly another 10-15km/h to add before Caltex Chase – makes the R8 road car as quick on Conrod as its R8 LMS racing equivalent – perhaps quicker. (The race car’s speed-penalising aero more than compensates everywhere else).

For the moment, there are two versions of the new-generation R8 road car, starting with the regular V10. It carries over the previous 5.2-litre V10 engine, albeit with higher outputs of 397kW/547Nm (up 11kW/17Nm).

All R8s feature a seven-speed S-Tronic and – unless you’re lining up for a LMS racer – quattro all-wheel drive.

Then there’s the V10 Plus, expected to add about $30K to the base car’s estimated $370K (prices are announced mid-February). The Plus chuffs out 449kW and 560Nm and with a 40kg lighter kerb weight (1555kg) covers 0-100km/h in 3.2 seconds, three-tenths quicker than the stocker. The Plus’ power gains come solely via software, the weight through features like forged 20-inch wheels and carbon-ceramic brakes. 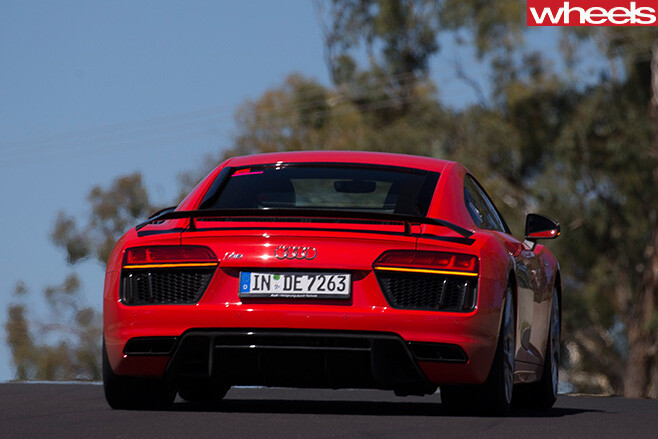 The new R8 is tougher to the core, its structure now comprising carbon-fibre and aluminium sections, cleverly joined via what amount to self-tapping, self-welding screws. The structure, shared with Lamborghini’s similarly skeletoned (and Plus-engined) Huracan, is claimed to be 40 per cent stiffer.

Romolo Liebchen has nothing to do with Audi’s road cars. Except that, as head of Audi Sport’s customer racing division, he had a hand in this R8 almost from the beginning.

Liebchen explained that the first-generation R8 (2007) was all but completed by the time Audi Sport initiated its customer program. “You remember the movie, I Robot? The rear of that car [Audi RSQ concept] was the preferred design. But it created too much rear lift for racing, so we were able to influence that.” The new car, fractionally longer on an identical wheelbase, has had a lot more motorsport attention to its chassis, suspension and aerodynamics. The rear guards, for example, now contribute up to 40kg of downforce, while the rear wing adds another 60kg downforce.

The biggest hardship inside is having to adjust the steering column manually. The cockpit is supremely comfortable, with the purposeful feel of a GTi more than a snooty supercar.

With the chassis electronics set in Dynamic (one of four modes), the glorious, roaring V10 gives a gorilla-sized shove. The low-three standing quarter club is a fairly tight one, but few other members are so unfussed about it.

The racetrack doesn’t hobble this car’s capabilities; it highlights them. The R8 is so obviously sharper, more intuitive and more stable than before. The steering has become comfortably quick without a hint of nervousness. Turn-in confidence and overall grip are amazing, yet when heat build-up knocks the edge off the grip after five hard laps, it only underlines the predictable responses of the chassis, with gentle understeer into the Cutting and the Dipper, and subtle signals from the tail in the downhill direction changes of the Esses. 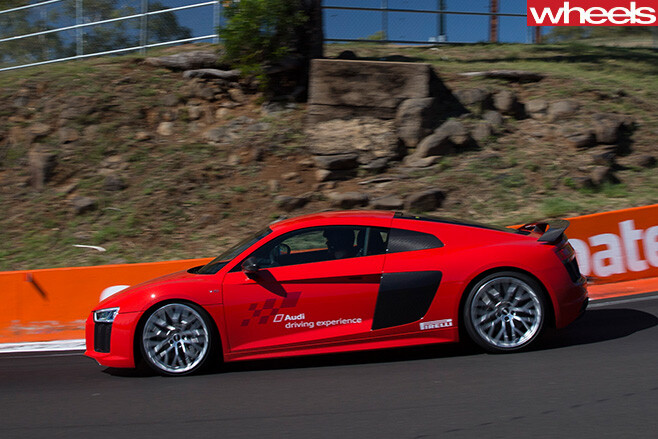 The acceleration out of Forrests’s Elbow onto Conrod still fails to convey the actual speed you’re doing. It goes light over the crest, just enough that you feel it tensing its toes deep down in its argyle socks. Then its sucked-down stability into the Chase, and the massive, clawing braking power into the left-hander, makes you push harder the next lap.

I can’t right now think of another car that was this easy to drive this fast. Certainly, the aero-steroided R8 GT3 LMS isn’t.

The R8 V10 Plus will do everything expected of a hard-edged supercar, without risk of regular laceration from those hard edges. And it seems to offer the docility and road-going comfort of a GT, without the need for a bladder-stop and a lie-down after a few hard laps on a racetrack.