For 2016, BMW has upped equipment levels and dropped the price of all of its 4 Series models – the F32 Coupe, F33 Convertible, and the F36 Gran Coupe. Additionally, an all-new family of petrol engines with more of everything lob in.

WHAT IS IT?
The BMW 4 Series is really a current (F30) 3 Series with different body styles – a distinction that allows the Bavarians to promote them as being a little more exclusive. For 2016, the mechanical updates that came with last year’s 3 Series facelift have only now just reached the 4 Series.

WHY WE'RE TESTING IT
ALTHOUGH this is an updated 4 Series, things aren’t quite what they seem. This is nowhere near the level of change that the very closely related 3 Series sedan and wagon received for the 2015 facelift. But as it involves all-new petrol engines – more specifically BMW’s box-fresh modular range of B48 and B58 in-line four-cylinder and six-cylinder units respectively – then the MY16 4 Series update is definitely worth checking out. 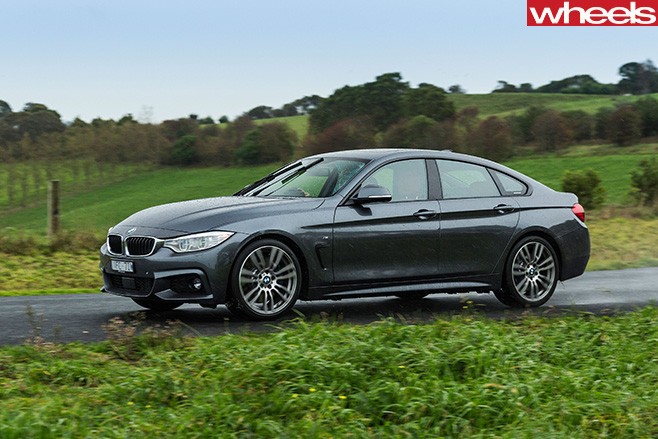 THE WHEELS VERDICT
THE BMW 4 Series range of coupes (F32), convertibles (F33), and hatchbacks (F36 Gran Coupe) will soon be the oldest on sale now that Audi has officially unveiled the second-gen A5, so the Bavarians’ attempt to keep buyer interest with lower prices, higher spec levels, and even more efficient and/or powerful engines sharpens their appeal in small but significant ways. Applying to all non-M car petrol variants, the powertrains in particular are reasons enough to choose these over the latest C-Class coupe or equivalent, and there are no duds in the range at all. Just be aware that a more significant change is coming during 2017 in the form of a facelift. So it’s best to treat these as the MY16-only 4 Series updates. THE WHEELS REVIEW
THROWING out the more than perfectly serviceable range of four and six-cylinder petrol engines in the 4 Series range of coupes (F32), convertibles (F33), and liftbacks (F36 Gran Coupe) in order to improve them is like asking Superman to, you know, not use his superpowers to fight evil.

Both are central to what makes each exceptional.

But that’s what BMW has done in order to stop an exodus to the newer Mercedes-Benz C-Class Coupe and Lexus RC (as well as next year’s all-new Audi A5 Mk2); binning the (hardly) old 2.0-litre four-cylinder turbo in the 420i and 428i, as well as the 3.0-litre in-line six-pot turbo in the 435i, for a brand new family of modular direct-injection turbo engines that bring small but significant gains in efficiency, economy, emissions, and – in some cases – performance. All fall in line with the F30 3 Series LCI Life Cycle Impulse facelift of 2015, though the 4 Series models will undergo a more significant makeover sometime next year. So this is a stopgap change for 2016 only.

To let everybody know you’re driving the MY16 4s, the upgrades bring new badges on some versions (420i excepted), with the 428i giving way to a 430i, while the 435i is now known as the 440i. In typical German fashion, neither of these larger alphanumerical badges correspond their engines’ actual capacity, as the former has 1998cc while the latter is a 2998cc item. They’re known as the B48 and B58 family respectively. A brief spin in a new 420i Gran Coupe revealed a sweet little performer that is eager to please as long as you select the right drive mode (sport) and are willing to exercise your right-foot muscles. Not exactly a classic-sounding BMW engine, the smallest-output version is still spirited enough to earn its maker’s badge.

More impressive is the 430i Coupe’s uprated 2.0-litre, which really turns the heat up with a hefty forward shove, combined with a more tantalising shriek as the engine visits the red line. Both four-pot turbos feel about the same as before, which is great news as there was nothing wrong with either.

Yet it is the all-new 3.0-litre straight-six shooter that best fits the BMW image, both for rapid off-the-line acceleration and effortless overtaking response. Throw in an alluring exhaust note, and it is easy to see why the 440i (again in Coupe mode as sampled) is the one to save up for. Speaking of which, the final good news about the 4 Series upgrade is a downshift in prices, to the tune of $2200 in the 420i (from $68,900 for both the Coupe and Gran Coupe), and stretching to around $10,000 in the 440i cars (now from $99,900). BMW reckons that the actual value difference multiplies, since there is between $6000 and $13,000 of extra kit fitted to the MY16 models. Most important is the standardisation of adaptive dampers across the range, taking the pummelling edge off vehicles wearing larger-diameter wheels and tyres. While not as supple or cushy as the best in class (that’d probably be the Jaguar XE currently), their comfort advantage is undeniable.

Other previously optional items to be found in the base 420i includes a head-up display, Lane Departure Warning  and a surround/top view reversing camera set-up, while the expected bestseller 430i versions (from $79,900 for the Coupe) up the ante with those plus an M Sport Package: swishier leather interiors, and keyless entry/start. Choosing the 440i now means that front seat heaters, automatic high beam, adaptive cruise control, and automatic parking will be fitted. Note that the continuing 420d with a 2.0-litre turbo-diesel remains the same as before, except that the extra spec and lower prices also apply.

Clearly, then, BMW is keen to keep the 4 Series relevant. It claims that about 57 percent of buyers are new to the brand,  and has translated to about 4000 fresh customers out of the total 6847 sales since the range debuted in Coupe guise in 2013 and Convertible/Gran Coupe formats a year after that.

Of course, it may be fighting a losing battle since most consumers for this style of vehicle are fashion conscious, and the 4’s increasingly derivative and rapidly dating dashboard won’t do the BMW any favours – especially when people see how attractive the upcoming A5’s fascia looks.

Other than that, though, the 4 Series remains one of our favourite BMWs. Whether they’re necessary or not, the engine revamp hasn’t upset the great driving experiences, while nobody can complain about lower entry prices and higher equipment levels.