According to all accounts, there are no Ford Falcon XR6 Sprints left. Here’s what you’re missing out on.

The limited-edition $54,990 Falcon Sprint XR6 may not be the fan favourite (the V8 wins the popularity contest) but maybe real Ford drivers will want the XR6.  It’s lighter, ultimately faster on a track, and cheaper. 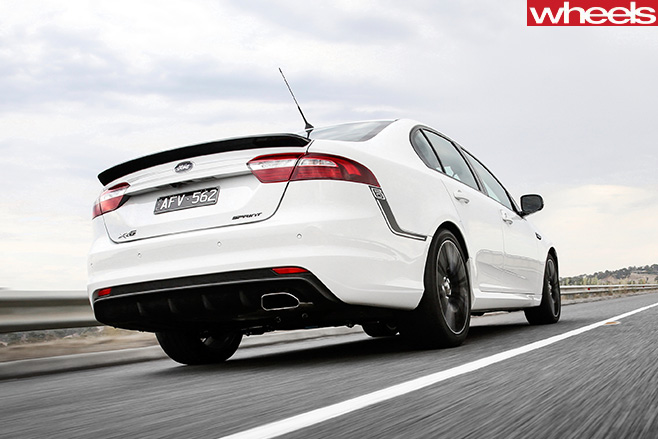 WHAT IS IT?
The 4.0-litre Ford Falcon Sprint XR6 is obviously and undeniably part family car, but like its sibling XR8 Sprint, has been tweaked and massaged by a bunch of unreconstructed enthusiasts among the Blue Oval back-room boffins. From the dusty Ford Performance Vehicles parts bin they grabbed turbocharger and injectors and added a big intercooler. Presto! More power and torque. Then they added big Brembo brakes, fat Pirelli rubber, rear spoiler…

WHY WE'RE TESTING IT
There’s mega interest in these last two Falcons-with-attitude. The Broadmeadows mob has shown a real determination to send the Falcon XR badge off into highway heaven with a significant bang.  How much is rhetoric and do the impressive power and torque numbers translate into a real-world blast of the senses? More importantly, ultimately is it a fine motor car? 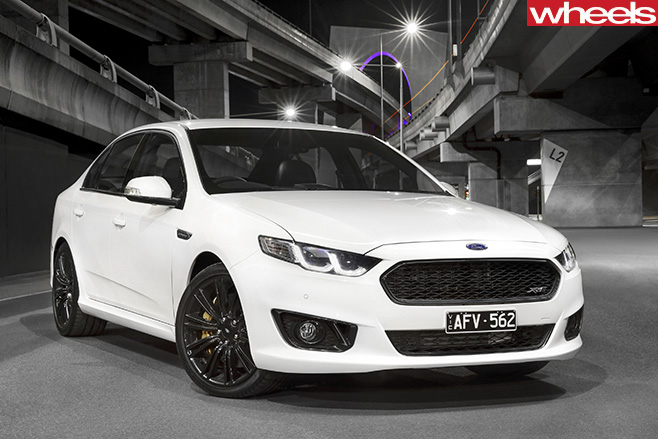 MAIN RIVALS
Chrysler 300 SRT8 Core represents serious Yankee 6.4-litre V8 muscle and gangsta attitude for $65,000, with 350kW and 637Nm to keep the rear tyres turning and burning. Now with a slick eight-speed transmission replacing the old five-speed clunker. Ford Falcon XR8 Sprint is from the same nest but sibling rivalry looms large.  Which one to choose…? The 345kW V8 has the numbers to impress your mates, and is your mechanical Rocky Marciano, while the 325kW turbo six is the mechanical embodiment of Muhammad Ali, brutal but with finesse. Ford Mustang 2.3 EcoBoost Turbo has the eye appeal and mystique to get potential Falcon Sprint buyers vacillating.  It’s $10K cheaper than the local hero and the four-potter conjures up 233kW…making it 92kW shy of the Sprint XR6. Holden Commodore SS-V Redline with new LS3 6.2-litre V8 roars like a Lion king should, and is the most driver-focussed top-spec hot rod in the zoo.  Holden is making sure the local product is not going out quietly, not with 345kW and 575Nm of useable performance. Priced at $56,690. 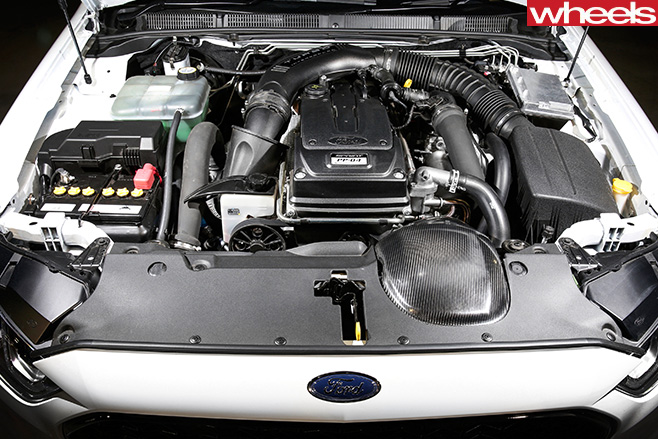 THE WHEELS VERDICT
This is the most worthy and potent final salute from Ford Australia’s engineers and designers and a telling reminder of the talents of Australia’s ride-and-handling specialists.  Go for it. Grab yourself a piece of Blue Oval Oz history.  Oh, sorry…too late.  You’ve missed out on the chance to own this Ford Australia collectible, and a whole lot of fun driver’s car with it.

THE WHEELS REVIEW
IT’S an undeniably sad time, this look at the last new (and a thankfully wild) iteration of the locally made Ford Falcon breed.  The Falcon disappears on Bathurst 1000 eve in October after a rich history dating back to 1960. 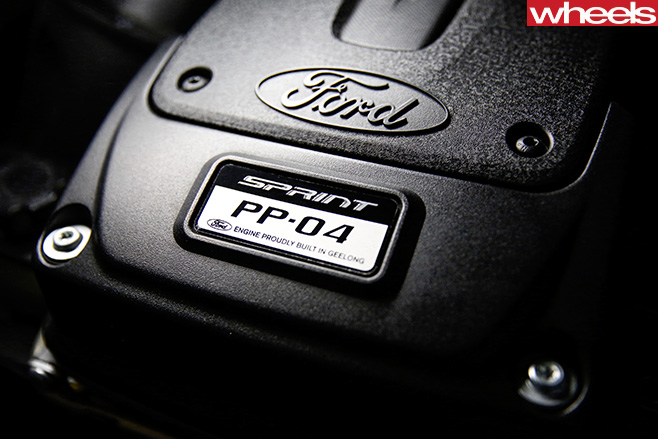 But how good it is that Ford has tried really hard to make the farewell model one to remember.

In-line sixes and bent eights were the staple of Ford Australia local manufacturing and big in the motoring lives of many of us, so fitting it is that the Blue Oval has worked at creating standout examples of each in the form of the Falcon XR6 Sprint and XR8 Sprint.

It started with the blokes and ladies from a small product engineering team thrashing out their achievable wish lists, with help and inspiration from the recently redundant Ford Performance Vehicles parts bin.

The passionate engineering team set out to produce among the most powerful V8 and turbo engines ever from the 5.0-litre Miami and 4.0-litre Barra.

There was also the understanding that having a mountain of grunt is futile if the car can’t put it on the deck. The overarching challenge was to create a ride and handling tune around the new Pirelli rubber with the objective of engine, chassis, tyres and suspension working together cohesively.

There’s a lot of urge to control. 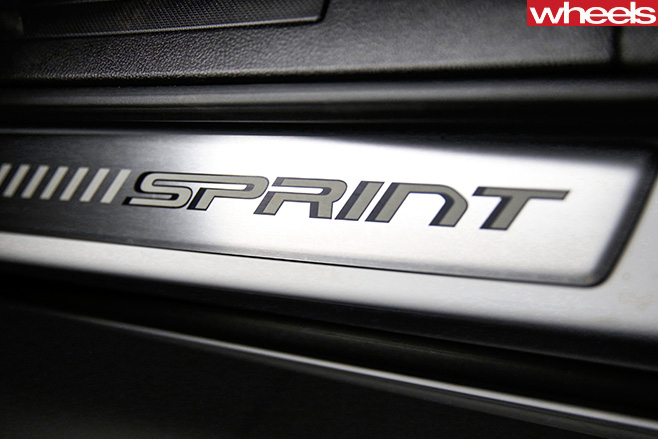 Choosing between the V8 and turbo six is tough.  The feeling is the XR6 Sprint would be a mite faster on a track although on the road, there’s no great difference dynamically on the highway.  A brief drive of the manual XR8 confirmed to us that the auto variant would be way more liveable, especially in metro motoring.

With the launch control process, there’s a disconcerting fleeting hesitation and then the Pirellis bite and gallop while the turbo I6 gets rather frenzied.  With the subdued exhaust finally bellowing, and crackling on over-run, it’s a jet-fighter surge towards the horizon…

The V8 and six will nail the 0-400 metres in somewhere between 4.5 and 4.8 seconds.  “Somewhere” is best we can suggest. The Ford guys don’t want to be pinned to a number, and we struggled to find a flat, straight piece of road on the drive program to get valid times.

The Ford team is complimentary about the role of the chosen 35-series, 19-inch Pirelli rubber in making the rollicking Sprint pair so manageable under heavy acceleration. The 245 fronts and 265 rears help tame the wild horses, giving the Sprints the lateral and power-down grip the development team targeted. Yes, the tyres are a noisy on coarse surfaces, but we can pretty much guarantee no owner will mind.

The ride quality of both Sprint XRs is nothing short of dazzling, devoid of any jarring or loss of body control over bumps whilst unflappable in a series of corners. 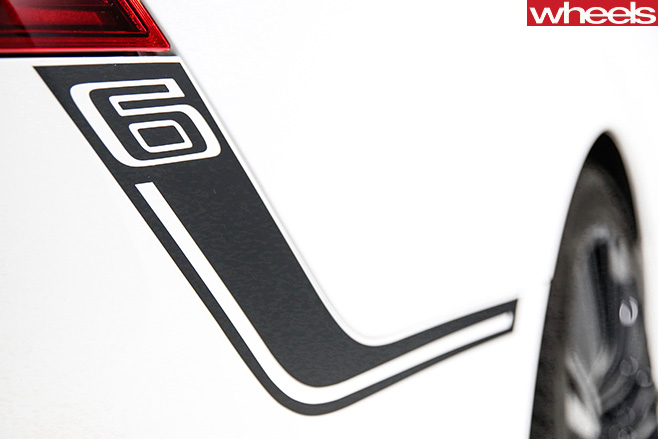 However the ZF six-speed auto is showing its age, and needs paddle shifters and auto blipping on the down changes.  In today’s world, it can’t match the dual-clutch gearboxes, which are both faster and more fuel efficient.

The brake package, inherited from the GT F, is up to any job with vented discs all around (355mm fronts; 330mm rears) with Brembo fixed aluminium callipers (six-pot fronts; four-pot rears) in an semi-gloss gold.  Red callipers are so yesterday…  More importantly, the pedal feel is brilliant and the stopping performance impressive.

The XR6 Sprint weighs in at 1818kg, or 64 kilos less than the auto version of its V8 brother.   The absence of two cylinders saves 23 kilos, while a lighter exhaust helps bring down the mass.  The XR6 Sprint is also the only Ford engine anywhere using a carbon-fibre air intake, paper thin yet so strong and providing valuable space in a crowded engine bay.

The styling of the XR Sprints brings a rare subtlety to the genre.  They’re so pleasantly understated that Ford worried that the heartland CUBs mightn’t go for them. Wrong.  They bowled over the dealers in an indecent stampede.

The XR8 Sprint also has a distinctive black painted roof and black wing mirrors. The six gets a hockey stick decal on its haunches; the eight wears an island outline. 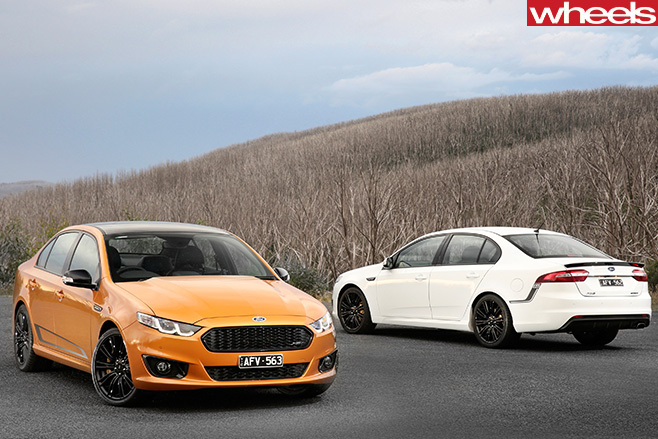 Importantly for collectors of limited editions, each XR bears a numbered build plate on the front of the engines.

Yes, this is an unbridled sports sedan but not without its bespoke touches.

The cabin makes a statement with its dark yet not-quite-sinister charcoal leather seats with suede splashes. The sports seats from the XR but with trim and stitching changes for the Sprint, get some power adjustment. The seats are a little high for ideal relationship with the steering wheel. However, the cushion is nicely shaped for the tush, although the torso is not restrained enough by the seat backs during fast motoring.

Both Sprints get Ford’s interior command centre, meaning excellent and simple connectivity with SYNC2 voice control and the eight-inch colour touch screen we know from other Fords. The audio is AM/FM/digital with a quaint single slot for CD. Dual-zone climate control is standard, too, and lest you forget what you’ve bought, the Sprint logo is scattered liberally around the car.

Now the bad news.  If you want to own an XR6 Sprint, you’re just too darn late.  All were snapped up before the on-sale date.  Same with the XR8 Sprint manual.  Left are just a handful of V8 autos.