WHAT IS IT?
It’s the brand-new Infinti Q30, a high-riding hatch that is the smallest, and also the cheapest, car ever made by Nissan’s premium arm. It’s built on Mercedes-Benz’s MFA small-car platform, so shares much of its running gear and interior switchgear with the Mercedes-Benz A-Class, CLA and GLA. That uniquely styled exterior, though, is pure Infiniti.

WHY ARE WE TESTING IT?
Because it’s arguably Infiniti’s most important model. Priced from $38,900, the Q30 is competing in the hugely competitive premium hatch/crossover segment so aims to steal buyers from proven rivals like the Mercedes-Benz GLA, BMW X1 and even the Volkswagen Golf. It’s a vast market and one that represents a huge sales opportunity. So while this isn’t quite a make-or-break car for Infiniti in Australia, it’s bloody close. 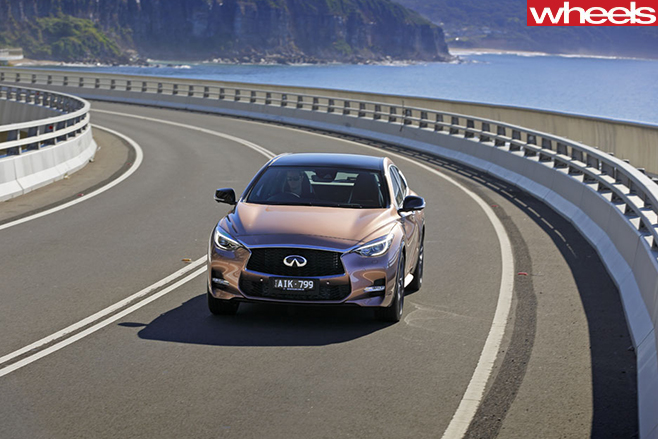 THE WHEELS VERDICT
Good, without being great, the Q30 will undoubtedly become Infiniti’s best-selling model. Obvious strengths include its eye-catching design, decent dynamics and a nicely refined cabin, but the grumbly 2.1-litre diesel, lack of a standard reverse camera in the base and mid grades, and a stilted ride mean it falls short of being class leading. 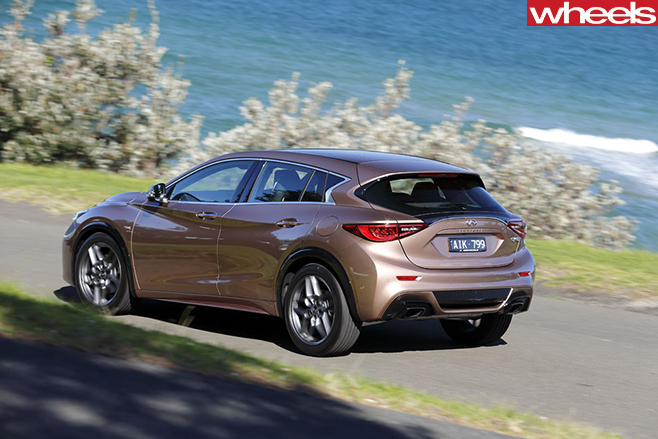 THE WHEELS REVIEW
CARS don’t get much bigger than this one for Infiniti in Australia. Not literally of course – that role is filled by the elephantine Infiniti QX80 SUV – but when it comes to brand awareness, and of having the potential to boost Infiniti’s dismal sales, the Q30 could be something of a game changer.

Officially it’s pitched as a crossover, thanks to that loftier-than-normal ride height, which straddles the divide between conventional hatches and taller small SUVs. Its pricing fits that gap, too. Starting at $38,900 for the entry-level GT and finishing at $56,900 for the diesel-powered Sport Premium, the Q30’s three-tier range will attract buyers shopping everything from the cheaper Audi A3 and BMW 1 Series, to more expensive variants of the Mercedes-Benz GLA and BMW X1. 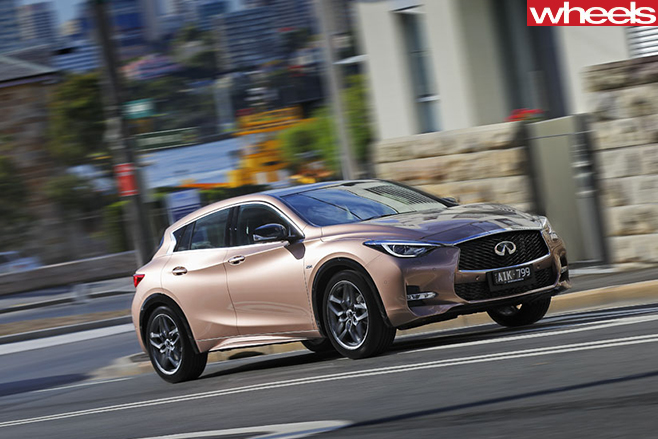 Then there’s the way it looks. Infiniti has worked hard to ensure the Q30 stands out from the pack with exterior styling that dares to be different. It’s edgy, bold and festooned with so many lines, angles and creases that it should look contrived and confused, yet somehow doesn’t.

The dynamics aren’t bad either. Peel away the skin and the Q30 is actually a Mercedes-Benz underneath. It’s built on the same MFA small-car platform as the A-Class, B-Class, GLA and CLA, so shares its engines, seven-speed dual-clutch gearbox and suspension hardware with its German competition.

Its dynamics are sorted, the steering light but nicely judged, and the ride is comfortable and compliant, for the most part at least. 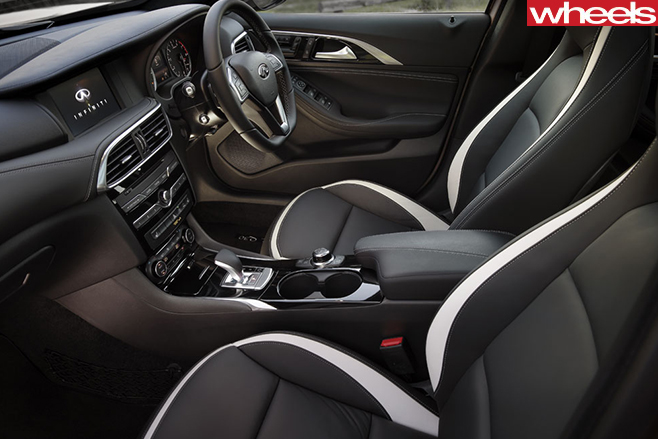 There are two suspension tunes to choose from: a softer set-up in the base GT which rides on 18-inch wheels, or a firmer and 15mm lower tune in the Sport and Sport Premium, which roll on larger 19-inch hoops and also score bigger Brembo brakes. Both tunes feel suitably long-legged at speed, but what lets the Q30 down is its low-speed ride which is pattery and stilted.

Engine wise, the standouts are the two petrol offerings. Base GT variants use a quiet and smooth 115kW/250Nm turbo four, but the stronger engine is the 155kW/350Nm 2.0-litre unit fitted to the Sport and Sport Premium grades.

The weak link is the sole diesel. The oiler commands a $2000 premium over the 2.0-litre petrol, yet is doughy and sluggish in city traffic. It’s 125kW/350Nm outputs feel anaemic too, and don’t encourage ambitious overtaking manoeuvres. 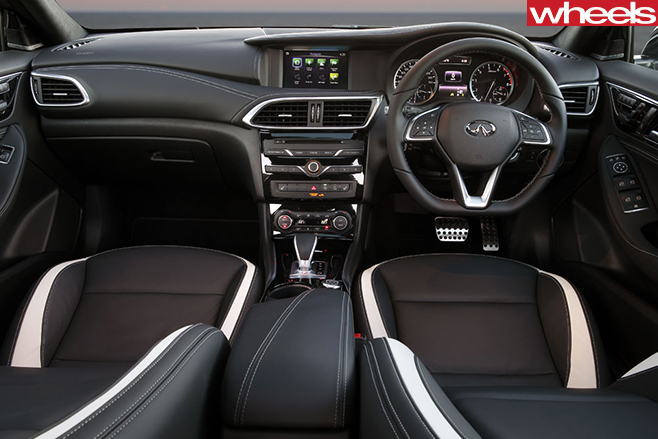 At least the cabin is impressively quiet. Again, the Mercedes influence is obvious in the design, dials and switchgear, but the new front seats fitted to Sport and Sport Premium grades are excellent, and Infiniti’s engineers have worked hard to eliminate unwanted wind and road noise. The materials, and fit and finish, is also top notch. What’s less commendable is the steep equipment walk up through the model range. While every Q30 scores a five-star ANCAP rating, AEB, Bluetooth and voice recognition, only the most expensive grade is fitted with a reverse camera. It’s a glaring oversight given the Q30’s narrow glasshouse and limited rear visibility. There’s no Apple CarPlay or Android Auto connectively either, in any variant.

So while the Q30 has obvious strengths, it’s not perfect. It’s far from a silver bullet for Infiniti’s lagging sales, but does deliver a welcome, and much needed, step in the right direction. 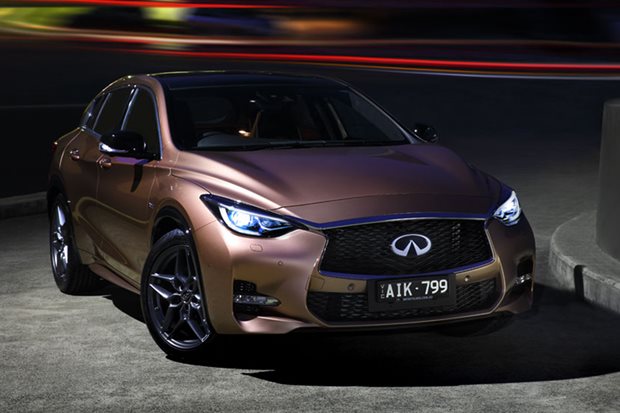 The Q30 is an all-new, five-seat hatch with a hint of crossover due to a higher ride-height. It’s an incredibly important car for Infiniti, as the brand attempts to lift is... 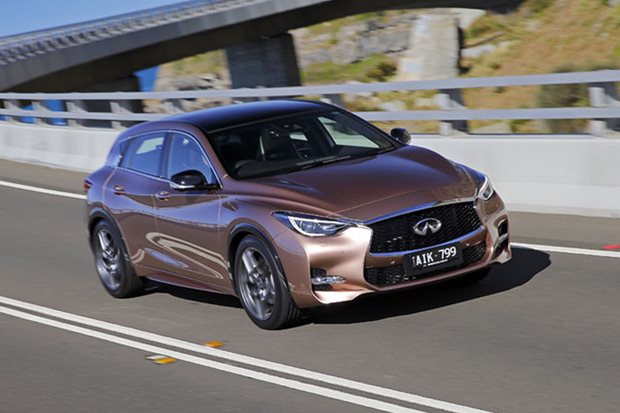 The Infiniti Q30 is an all-new, high-riding hatchback made by the luxury arm of Nissan. It’s Infiniti’s first foray into the highly competitive premium hatchback/crossover... 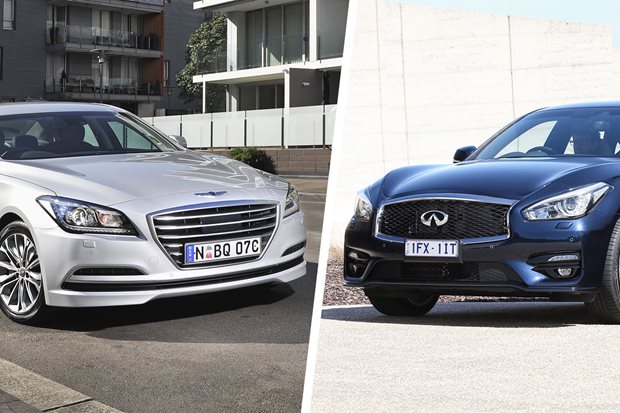 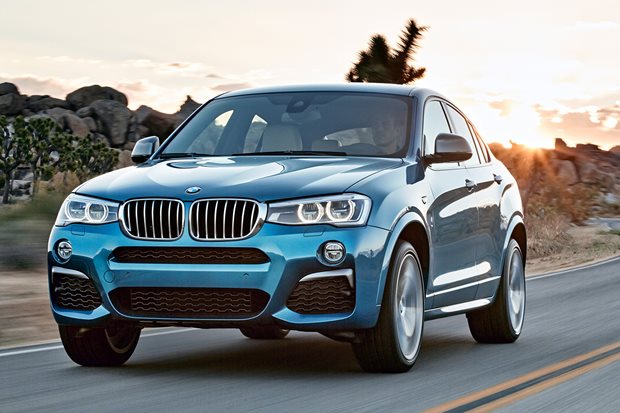