Due here in March, the five-door Picanto hatch will woo young buyers with style and value - as Kia boldly goes where Volkswagen, Fiat and Ford have failed.

WHAT IS IT
Sitting below the established Rio, the Picanto is a European designed and engineered five-door hatch from South Korea, aimed straight at the Holden Spark and Mitsubishi Mirage micro-class heartland.

WHY WE'RE TESTING IT
Kia has lately emerged from the shadows as Hyundai’s cheap and cheerful understudy, with impressive new models such as the Proceed GT and latest-generation Sorento. Over in Europe, the German-developed Picanto has found favour as one of the sub-B segment’s leading lights, and so we’re expecting big things of the sub-$15K five-door baby hatch in Australia too. 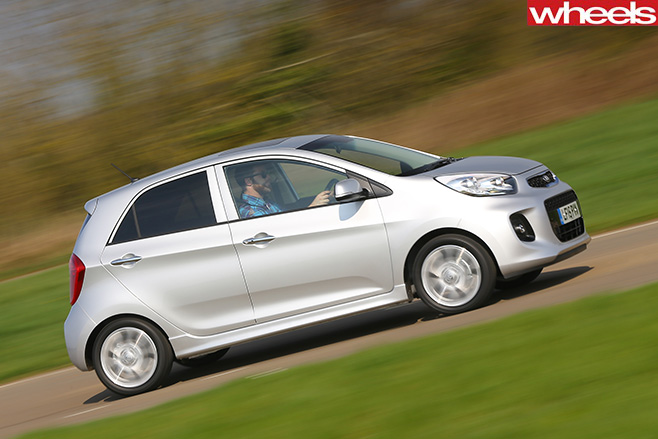 THE WHEELS VERDICT
Kia is in with a real chance at cracking the tough micro class with the good looking Picanto. Far from seeming cheap, the cheerful five-door hatch exceeds expectations with a quality, solid feel inside and out, backed up by relatively strong performance, eager steering, and a decent ride. If the refined 1.25-litre auto’s driveaway pricing does end up being under $15,000, then the South Korean brand might be a real hit in Australia – provided the as-yet undriven auto isn’t a slug and the Picanto overall behaves as well on local roads as it does over British ones.

THE WHEELS REVIEW
VOLKSWAGEN UP. Smart ForTwo. Fiat Panda. Australia is littered with the still-warm carcases of cool city cars that should have set the sub-B segment on fire but instead fizzled out like a first-term PM. 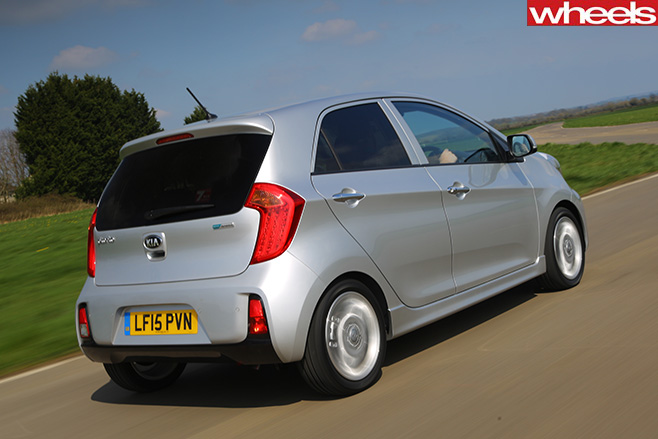 Although the rewards for success are potentially huge (snaring youth loyalty for life, mainly), our big open spaces, small fuel prices, and irresistibly cheap superminis from the next segment above, basically make baby cars redundant Down Under. Speaking of which, the name micro does the class no favours for those with size issues.

Brave Kia, however, has the balls to battle it out against the inexplicably popular Mitsubishi Mirage with the new Picanto, a funky sub-B hatch that slots beneath the Rio. Derived from the Spanish word for hot and spicy, it has helped fire up the South Korean brand in Europe over the past decade or so.

Keeping things simple here, only a single, middle-spec, five-door hatch is heading our way next March, with driveaway pricing that means business at around $13,500 for the manual, and $15,000 in four-speed auto guise (compared to $16K plus on-roads for a base Rio S three-door). And you’re not getting some flimsy and tinny buzz box, either. 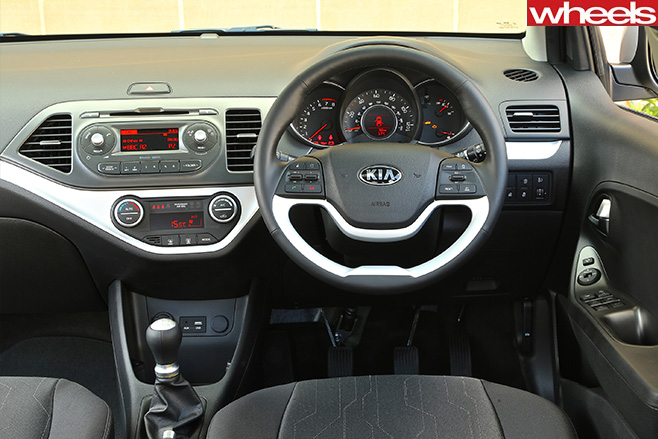 Having already transformed Kia design in larger models, Peter Schreyer has ensured that the second-gen Picanto transcends the pitfalls of many truncated hatches with balanced proportions, a friendly face, and a striking tail-light treatment. It’s a far cry from the apologetic Chicken Little looks of the otherwise appealing Suzuki Celerio.

Likewise, and despite being just a smidge under 3.6m long and 1.6m wide, the five-seater Kia’s lofty 1.5m height and near-2.4m wheelbase liberate enough space for four adults (albeit on rather flat seats up front), though the sub-200L luggage capacity (with a space-saver spare) is an unavoidable city-slicker upshot.

Hardy the cabin plastics may be, but the dashboard’s elegant and easy layout shames many bigger cars, and the driving position, ventilation, vision out, and storage is not compromised by the pert-hatch packaging. Extra marks go to the forward-tipping rear seat cushion allowing an extra-low load area with the backrest folded, the very S-Class-esque two-spoke wheel, effective Bluetooth connectivity, and ultra-clear instrument dials. No wonder the Euros rate this baby so highly. Reach adjustable steering would be nice, however. 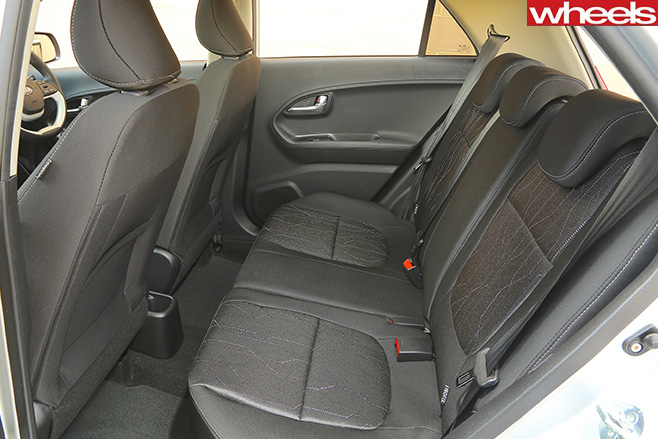 The Picanto should score points with punters with its 1.2-litre four-cylinder petrol engine – a twin-cam variable-valve unit with an extra cylinder over most rivals. Fervent yet sweet, and with only about 900kg to lug about, it pulls willingly off the mark, sings well past the 6500rpm red line, cruises effortlessly at 120km/h (on UK motorways), and promises to return exceptional economy using stop/start tech –though that’s not confirmed as yet for Oz. It’s a far stronger heart than the 51kW/95Nm 1.0-litre triple that was sampled but rejected – even if the (as-yet untested) auto’s official 0-100km/h figure is a snoozy 13.7s.

Kia’s Frankfurt base also sorted out the chassis – purely conventional MacPherson struts up front and a torsion beam rear – with an emphasis on flowing (electric) steering responses, controlled cornering, and a comfy ride. If you’re up for some fun, the Picanto feels pleasingly lively yet grippy. On the flipside, some road noise is evident and the brake pedal is overly touchy. Still, these are minor blemishes in an otherwise agreeably grown-up baby package.

Kia’s plan is a canny one. With no alternatives from big-name players such as Mazda, Toyota, Hyundai, Honda, and Ford, there is every chance that the smartly specced Picanto will meet its 300 monthly sales target, establishing the brand as a sub-B leader – an enviable position to be in when, inevitably, fuel prices soar, pollution taxes hit, and congestion issues worsen.