WHAT IS IT?
An all-new CX-9 that takes Mazda’s latest Kodo design language and drapes it over a seven-seat version of the CX-5’s SkyActiv platform. The current CX-9 pre-dates Mazda’s SkyActiv models that focus on fuel efficiency and dynamics via lightweighting and optimised internal combustion engines.

WHY WE’RE DRIVING IT
This is our first taste of the all-new CX-9. The original went on sale in 2007, and while it’s selling well for the brand, it’s significantly older and becoming increasingly dated against the swathes of much fresher SUVs in its class. Its earlier architecture limits things customers expect, such as driver safety assistance. 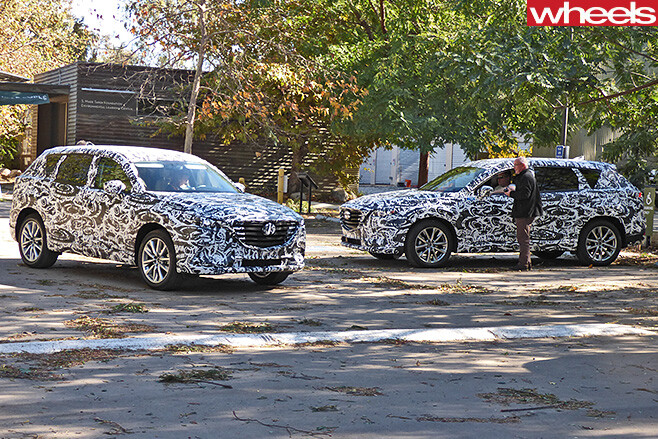 Mazda had pulled the wraps off their new CX-9 at the Los Angeles motor show, but the cars they offered us to drive remained disguised.

THE WHEELS VERDICT
The CX-9 takes Mazdas already strong platform architecture and teams it with an excellent, frugal and capable new engine. It’s more refined, much more efficient and more convincing in prototype form, with strong detailing, fit and finish. It’s a more opulent, accomplished seven-seater than before. 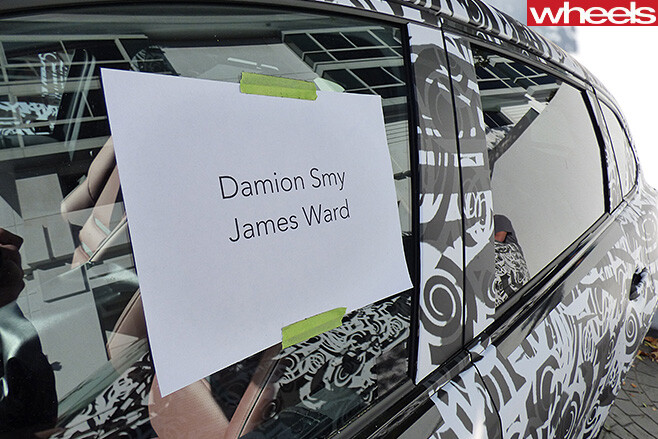 THE WHEELS REVIEW
WHEN Mazda released the CX-9 in December 2007, it surely didn’t think the “9” would also relate to the number of years it would be on sale. Yet the seven-seat flagship SUV is the oldest in its class, despite strong sales, and its replacement cannot come soon enough. So Mazda unleashed journalists in a pre-production prototype drive in Los Angeles – ­about the only place a camouflaged SUV goes barely noticed – with the hopes that the new CX-9 can repeat the success of its current SUV range when it arrives here in July.

The CX-9 arrives on the crest of a Mazda success wave, and is the last of its range to benefit from its ‘SkyActiv’ approach to building cars. That means it rides on the same platform as the CX-5, which is also used on the Mazda 6 and 3 – all vehicles praised for their dynamics and fuel efficiency. With a focus on weight saving, the 9 is now around 130kg lighter, despite the fact that there’s more interior space and the similarly-sized boot. The 55mm increase in wheelbase creates more rear seat room, with loads of head- and leg-room in the second row. The third row – while lacking air-con vents – is large enough for children and the occasional short trip for rowdy adults in need of removal from the local RSL. That extra girth reflects the design philosophy of the CX-9, which was handled by Mazda’s North American design division, as 80 percent of the global supply is forecast to be sold to the Yanks. Following the Kodo design language of the rest of Mazda’s passenger car range, it’s a far more elegant yet confident design, especially compared to the seemingly-rushed update to the previous car’s front-end in late 2012. The more upright trapezoidal grille takes over from that bluff front end, which designer Julien Montousse explains is now “proud” and less submissive.

It also hosts the completely new 2.5-litre turbo-petrol four-cylinder that replaces the 3.7-litre V6. While Mazda has taken an alternate route to most other makers with its four-cylinder engines by avoiding forced induction, the monster torque of the new CX-9 – 420Nm at 2000 rpm – couldn’t be achieved as efficiently with a SkyActiv V6 as it could with a turbo four, all while hitting the fuel efficiency improvement target its engineers were aiming for. That torque alone compares to the V6’s 367Nm at a lofty 4250rpm, even if its 169kW trails the larger engine’s 204kW. Mazda hasn’t disclosed fuel economy figures, but reckons on a 20 percent improvement on the current car’s figure – which, with 11.0L/100km for the front-drive base car, means a potential 8.8L/100km.

On the road, that makes the stickered-up, all-wheel-drive prototype CX-9 smooth, with an audible engine note that never turns coarse, and smooth, strong power delivery. The six-speed automatic behaved well on our short test drive, and the brakes were strong, not bitey, with good pedal feel. The steering, with its large leather-wrap steering wheel, has good weighting and feel from its commanding position, could be a little sharper in its responses. The ride on the Falken-tyre shod 20-inch alloys is comfortable, but can be crashy over larger bumps. The handling, meanwhile, is predictable, with great roadholding and poise. One noticeable step up from the current car is in terms of cabin refinement. It’s noticeably quieter inside the CX-9, bordering on premium in terms of insulating occupants from the grit and grind of your surrounds. The double-layer front windscreen is joined by thicker double-glazed front windows, too, while inside there’s a full-colour head-up display, crisp instrumentation and high quality leather, wood and aluminium detailing.

Mazda Australia is yet to confirm spec levels and pricing for the CX-9, but the range is likely to reflect the current three-model Classic, Luxury and Grand Touring offering, although there is a possibility of a higher-spec flagship. Pricing isn’t expected to deviate from the current car’s $43k kick-off when it lands here next year. Regardless, the CX-9 already has the polish of its stablemates, and that’s ominous for its competitors.

BOOST APPEAL
MAZDA says that it will sell 50,000 CX-9s annually, not many when it has an engine developed especially for it. Surely the 2.5-litre turbo will make an appearance in other models, as it fits in the 3, 6 and CX-5. The latter is the most likely, as the engine already runs 1.2 bar of boost and has limited power growth potential, making it not so good for a hot hatch or performance sedan. It also develops its 420Nm at 2000rpm, but that peak peters off earlier than the old V6, which plateaued at 4250rpm, as engineers found that in the real world, CX-9 drivers rarely breach 4000rpm, and only occasionally tap 3000rpm.