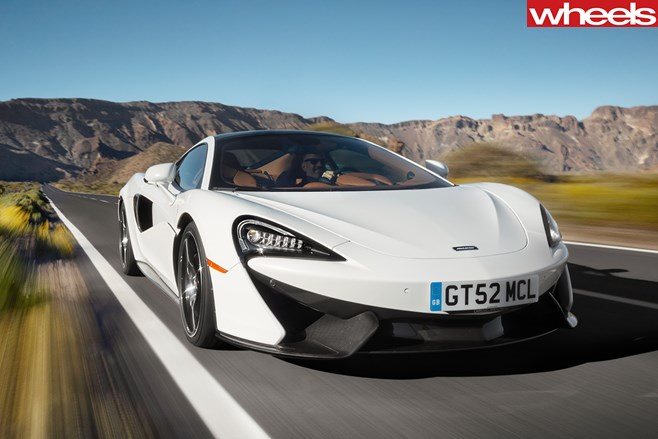 The ‘softer’ version of McLaren’s 419kW entry-level supercar has room for a picnic hamper? Who’s going to buy that?

The ‘softer’ version of McLaren’s 419kW entry-level supercar has room for a picnic hamper? Who’s going to buy that?

WHAT IS IT?
The second variant for the less expensive McLaren Sports Series and sister to the existing Coupe and forthcoming Spider versions. The GT has extra luggage storage area above its mid-mounted V8. It’s also been given retuned suspension to help it deliver on the Grand Touring claim implicit within its name. 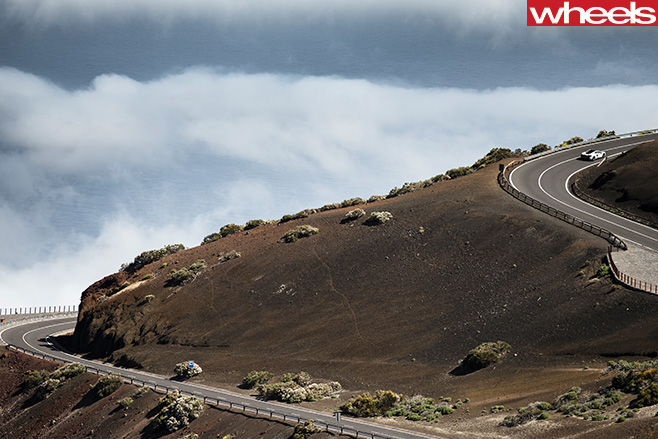 WHY WE’RE TESTING IT?
There’s no chance that we’re going to get bored of driving 400kW sportscars any time soon, even if the 570GT does sit practically at the bottom of the McLaren range. The company says that – despite a twin-turbocharged V8 in the middle of its carbonfibre structure – we should see it as a rival to cars like the Porsche 911 Turbo as well as luxury GTs like the Aston Martin Vantage. Can it manage that, or is it just a Sports Series with a boot? 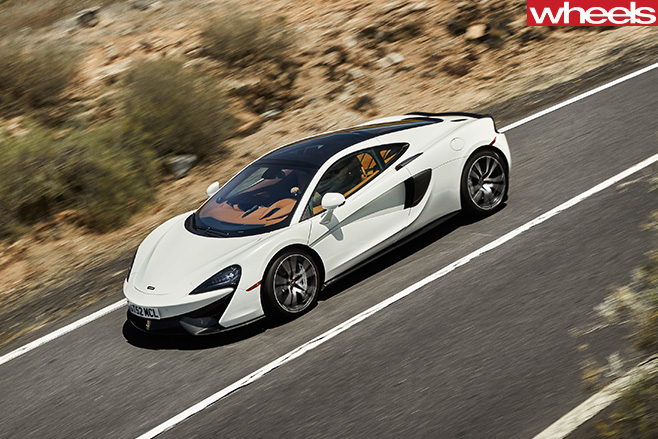 THE WHEELS VERDICT
McLaren has tried to step out of the usual sports car categories with the 570GT and it has succeeded in creating a hugely likeable car. Indeed, apart from the more aggressive visual treatment of the McLaren 570S Coupe and fractionally faster performance numbers, it’s hard to see what you’d gain by choosing it over the GT. The new car is more useful, a nicer place to sit and – under everything except brain-out race track use – just as quick. No McLaren will ever be a mainstream car, but this is one that manages to put ticks next to an impressive number of boxes. 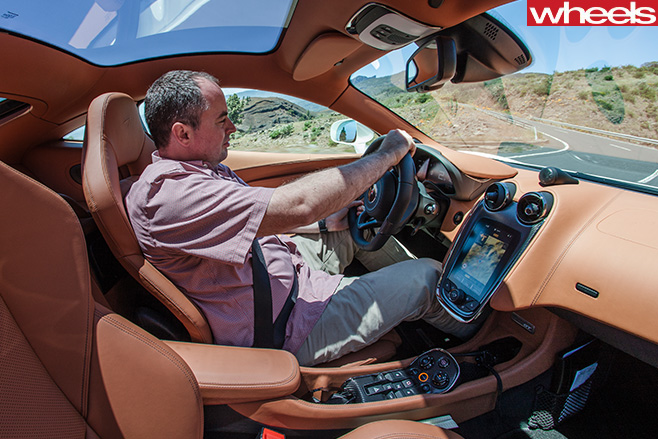 THE WHEELS REVIEW
Small changes can have big effects, and although the idea of a McLaren Sports Series with more luggage space and softened suspension doesn’t sound like a radical idea, the new 570GT proves to be more than the sum of its parts.

The big change is the arrival of what McLaren calls the “Touring Deck”, a secondary luggage compartment at the back of the car above the mid-mounted engine, accessed through a side-hinged glass hatchback. It might sound like a relatively minor tweak - the 570S Coupe already has some squashy bag space behind its seats – but it’s effectively a whole new body style and one that requires the GT to pretty much wear a rucksack. Yet it looks as good as, if not better than, its Coupe sister. 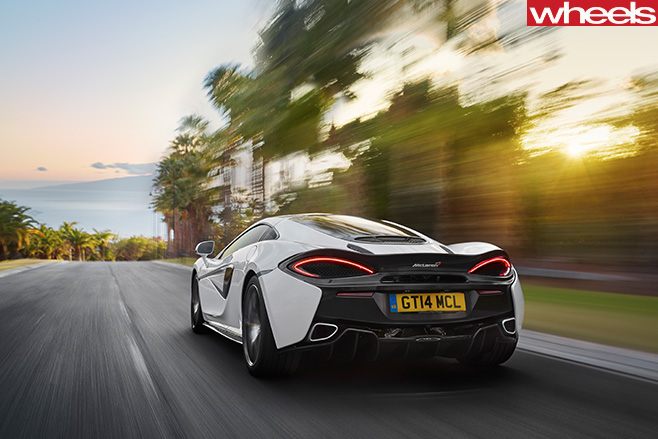 There’s 220 litres of space at the rear – in addition to 130 under the front bonnet – and the rear deck is also insulated to stop the 3.7-litre twin-turbocharged V8 underneath it from cooking the contents of any bags you entrust to it. McLaren demonstrated this by loading up a Fortnum and Mason hamper packed with delicacies and then ordering me to try as hard as I liked on a 130km driving route over some of the twister parts of Tenerife. The lunch emerged unscathed. The GT also gets a standard panoramic glass roof, which makes the cabin feel far lighter and more spacious than the 570S and gave the drive a suitably widescreen sensation. A tough gig, but somebody’s got to do it. 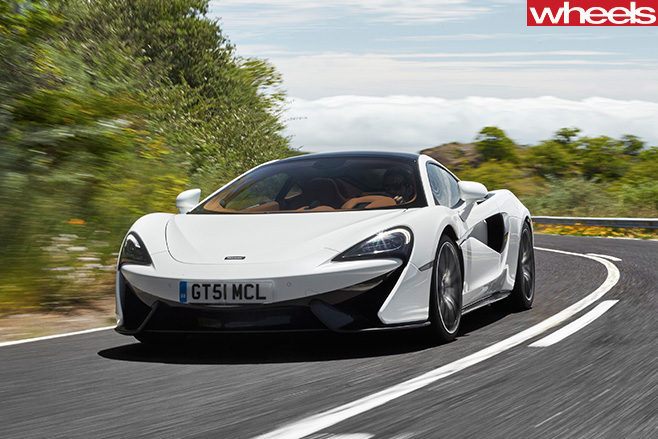 Driving is where things start to diverge from McLaren’s script. The company is keen to push the 570GT as being a different proposition to the 540C or 570S coupes, yet despite chassis tweaks including softened springs, revised software and even a lower-geared steering rack, it feels very similar on road. In Normal chassis mode ride is impressively pliant and the turbocharged engine and seven-speed twin-clutch gearbox handle schlepping well, but turn up the pace and it does a convincing impression of the 570S or even 650S ­- raucous, mind-readingly reactive, and quick enough that you have to keep reminding yourself that this is McLaren’s junior model.

The 570GT is probably the closest thing to a GT that McLaren will produce. It’s not as effortless as most of its obvious rivals are – owners will be reminded they’ve bought a junior supercar every time they have to clamber over the sill and past the upward-hinged doors. But it adds both utility and character to the 570S without requiring you to make any significant sacrifices in return. 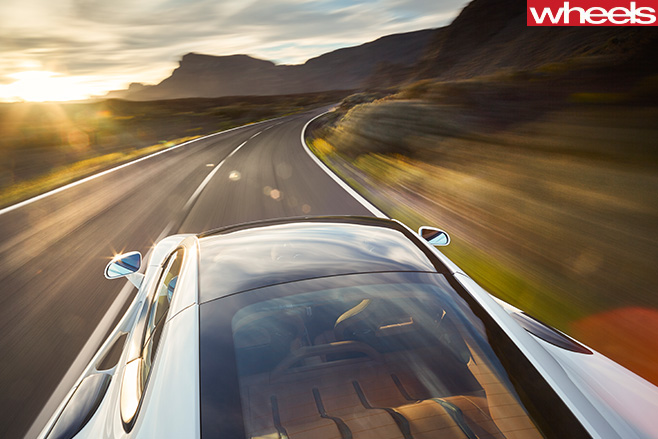 McLaren admits it doesn’t know how many Sports Series buyers will opt for the GT. “It’s a new part of the market for us,” says Andy Palmer, the company’s Vehicle Line Director (and no relation to Andy Palmer, Aston Martin’s CEO). “We think there is enough differentiation over the S, but it doesn’t matter if buyers opt for one or the other.” McLaren hopes to reach its target of producing 4000 cars per annum next year, with around two thirds of those being Sports Series.