Two doors fewer but so much more for the Mercedes-AMG C63 S Coupe.

WHAT IS IT?
The latest Mercedes-Benz C-Class sedan launched in Australia in late 2014, so it has been a bit of a wait for the two-door version to arrive. The headline, though, is the firebrand Mercedes-AMG C63 S Coupe; the rough nut in a sharper suit than its four-door sibling.

WHY WE’RE TESTING IT
The 375kW twin-turbo 4.0-litre V8 C63 S Coupe is not just a clone of its sedan-based sibling. Lower, wider and meaner, it promises more on-the-limit performance as a result. And with the challenging Ascari circuit in Spain as our proving ground, there’s plenty of opportunity to push it to the limit. 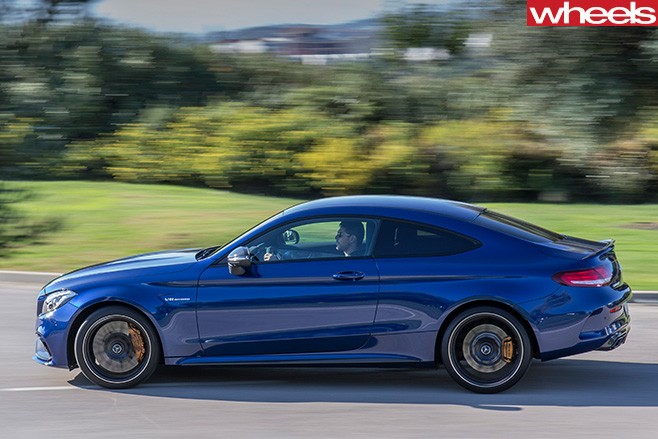 THE WHEELS VERDICT
Ripping off two doors, widening the front and rear tracks and staggering the tyres takes the already potent Mercedes-AMG C63 S sedan’s dynamics up to a whole new level.

THE WHEELS REVIEW
IT TAKES just four laps of the daunting Circuito Ascari, nestled between rugged, limestone-cloaked hills in Spain’s picturesque Andalucia region, to realise that Mercedes has created something special with the new AMG C63 S Coupe.

Four laps, 22km and 100 turns of the fast and technically challenging circuit to know that the C63 S Coupe is a remarkable machine, with the sort of dynamic depth once the preserve of cars from its nemesis and arch-rival, BMW’s M Division.

Of course, AMGs have always been fast, but they haven’t always been the sharpest scalpel in the surgical drawer. Yet through the tiller, pants and pedals, this new C63 coupe feels as if it’s been honed by a master swordsmith. 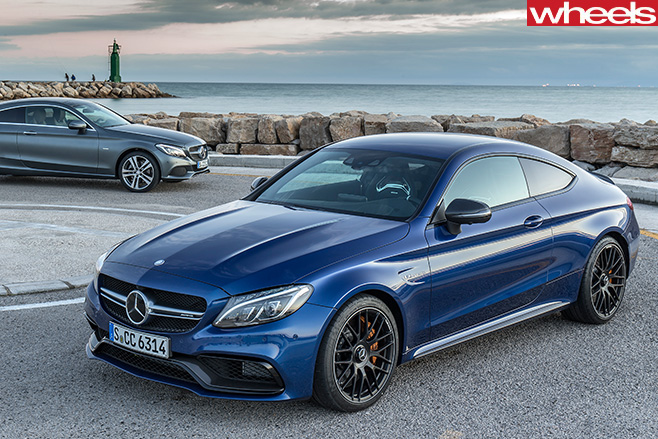 Fortunately, it still has all the brawn and ballsy bodacious-ness we’ve come to expect from AMG’s Affalterbach bunker, but those staples are now underpinned by hitherto unseen levels of technical sophistication.

As Mercedes-AMG chairman Tobias Moers explained, the goal with the C63 Coupe was to create an AMG that differs from the regular production Benz more than ever before.

From the outside that translates to a classic coupe profile that’s been honed to such buff muscularity that it shares only doors, roof and bootlid with the handsome base coupe.

Beneath the strikingly flared front and rear guards are tracks that have been widened by 64mm and 66mm respectively to house staggered 9.0x19 and 10.5x19 wheels, clad with low-profile 255mm and 285mm rubber.

As with the C63 sedan, the coupe features extensive use of aluminium in its body and suspension, yet weight is up 70kg over the four-door thanks to the structural reinforcing to the pillarless body.

Despite this, the two-door still manages to shave a tenth off the equivalent sedan’s 0-100km/h time, stopping the clock at a blistering 3.9 seconds, which is also a tenth quicker than the ‘cooking’ model C63 Coupe. 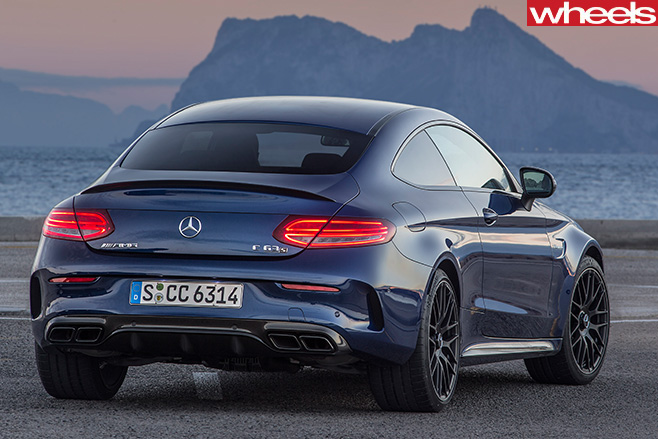 The pace advantage the C63 S enjoys over its two-door stablemate can be easily explained by the extra 25kW and 50Nm liberated from its subtly enhanced bent-eight. But to understand how it betters the 70kg-lighter C63 S sedan with the same horsepower, we need look to its heavily re-engineered suspension.

While the existing C-Class’s impressive lightweight four-link front suspension has been redesigned for the C63 Coupe’s widened track, it’s the entirely new multilink rear suspension that is the piece de resistance in the two-door’s dynamics arsenal.

In combination with an electronic limited slip differential, the new rear-end simply gets the V8’s prodigious power to the tarmac more efficiently. Importantly, it does so without compromising ride or creating unnecessary noise and harshness.

There is lots of noise, of course, but it’s a symphony of heavy-metal from AMG’s mighty 375kW/700NM 4.0-litre twin-turbo V8. It’s raucous enough with the standard exhaust, but fitted with the optional Performance Exhaust the engine becomes a barking, bellowing beast of a thing.

Out on the track, with the five-mode AMG Dynamic Select toggle set to Race, the system drops its traction control guard and raises the edginess quota dramatically, sharpening the reflexes of the engine and transmission, firming the electronically controlled dampers and allowing extravagant slip angles that dictate armfuls of opposite lock. 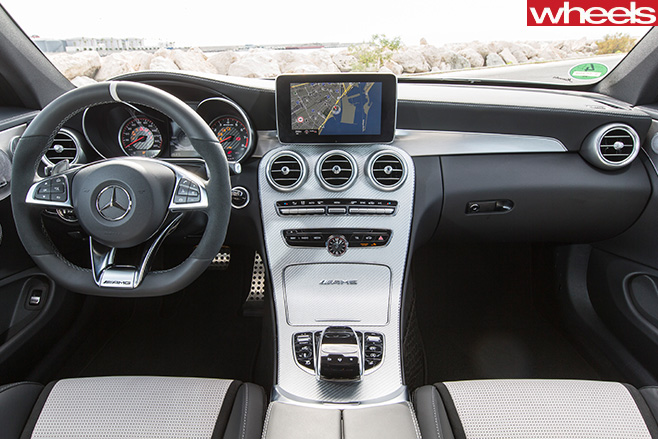 In the past, the combination of such a complex and technically challenging racetrack, rear-wheel drive and a 375kW/800Nm warhead up front might have caused the AMG driver to break out in a cold sweat.

But AMG has taken its dynamic game to a whole new level with the new C63 Coupe, delivering the sort of playful on-throttle adjustability that makes it a delight to get to grips with.

We can’t wait for the inevitable comparison with BMW’s M3.

THE stylish new Mercedes-Benz C-Class coupe arrives next March or April, with four models available at launch and a fifth, the C450, arriving in late 2016.

Final pricing and spec won’t be confirmed until the end of the year, but expect to pay about a five percent premium for two less doors versus the equivalent C-Class sedan.

The range kicks off with the 135kW/300Nm C200, a 2.0-litre four-cylinder turbo-petrol that takes over from the old C180 Coupe but promises more punch and panache.

Next up is the thrifty diesel-engined C250d, the only one of the new coupes to feature Benz’s new 9G-Tronic nine-speed auto. Its 2.1-litre twin-turbo four musters 150kW/500Nm and quaffs a miserly 4.4L/100km. The impressive new auto is destined to replace the seven-speed in other models in due course.

Further up the ladder comes the C300, or C300 Sport as it will be badged here. It replaces the current C250 and, as such, is expected to be the popular choice for most buyers. It packs the same turbocharged four-cylinder petrol engine as the C200, albeit upgraded to a more robust 180kW/370Nm, thus shaving a full 1.7sec off the C200’s 0-100km/h sprint.

Finally, at the top of the tree sits the AMG C63 S with its 375kW/700Nm 4.0-litre twin-turbo V8. Although available elsewhere in two states of tune, Mercedes-Benz Australia has opted, as with the C63 sedan, to take only the higher-output, better-specified version.